By Elya Altynsarina in International on 5 November 2018

ASTANA – The heads of government of the Commonwealth of Independent States (CIS) discussed 15 agenda items during a scheduled council meeting in the Kazakh capital on Nov. 2. 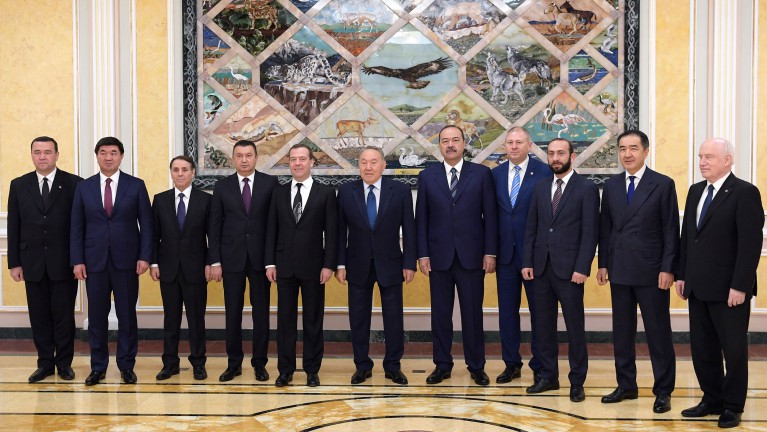 CIS is composed of Armenia, Azerbaijan, Belarus, Kazakhstan, Kyrgyzstan, Moldova, Russia, Tajikistan and Uzbekistan. One of the areas of focus was enhancing economic and trade cooperation.

“For more than a quarter of a century, the CIS has served as a full-fledged organisation that allowed preserving historical ties between our peoples and helped strengthen the sovereignty of each country. Today, cooperation within the commonwealth has become even more significant. Mutual trade within the CIS continues to grow. Last year, turnover amounted to $164 billion, an increase of 25 percent. A similar trend continues this year,” said Kazakh President Nursultan Nazarbayev in receiving the high-level officials.

He stressed the importance of strengthening the commonwealth by promoting its modernisation and efficiency and adapting to new realities.

“To expand economic cooperation within the commonwealth, we need to update the economic development strategy and accelerate the adopted projects of the agreement on free trade in CIS countries,” he said.

Nazarbayev also reminded his colleagues about the achievements on proposals made at the heads of state council meeting in Dushanbe, including removing trade obstacles; improved transportation, logistics and tourism coordination; joint space projects; developing digital economy and adopting innovative solutions.

“The integration of technology parks and the implementation of joint innovation projects will provide a major synergetic effect for the creation of high-tech production in the commonwealth. Western countries are actively using the Internet in 5G format that allows functioning of artificial intelligence. We should deal with its development. Each of us will not be able to do this separately,” he said.

“The implementation of these initiatives is not only about economic development, but will be an important factor in our relations,” he added

The formal part of the council was conducted in narrow and extended formats. As the formats allow proposals for further interaction, the Kazakh side once again raised issues of enhancing trade, implementing joint space projects, stepping up work on transitioning economies to digitisation and implementing CIS joint initiatives in the green sphere.

CIS Executive Secretary Sergey Lebedev promised all initiatives “will be carefully analysed by the Executive Committee” so everything can be prepared for execution “at the levels of statutory and sectoral bodies of the commonwealth.” The delegations expressed confidence that the decisions and their performance will contribute to cooperation within CIS.

The delegations highlighted the importance of the CIS Concept of Cooperation in developing and producing high-tech energy equipment. They believe it allows for expanding and modernising production facilities and creating new high-performance jobs, as well as increasing research potential and, in general, strengthening development of the energy sector, engineering and industry.

As part of the countries’ cultural relations agreements, Kazakh Days of Culture in Azerbaijan will be celebrated in November-December in Baku.

The trade turnover between the countries was $168.1 million for the first months of the year (2.1 times increase compared with $81.5 million in the same period last year). Exports to Azerbaijan increased 2.2 times to $134.6 million; imports were $33.5 million.

Within the last eight months, approximately 1.3 million tonnes of cargo were transshipped through Kazakh ports towards Azerbaijan, reported www.primeminister.kz.

Kazakhstan is considering exporting metals, food, animal and vegetable-origin products and railway engineering goods to Armenia. Trade turnover between the countries almost doubled from January-August compared to the same period in 2017 ($8.2 million in exports, $4.2 million in imports).