ASTANA – “Polish Advocates of Freedom – Saint John Paul II and Blessed Father Władysław Bukowiński,” a photo exhibition recently opened in the capital, pays tribute to two significant religious figures both in their historical homeland Poland and in the world. 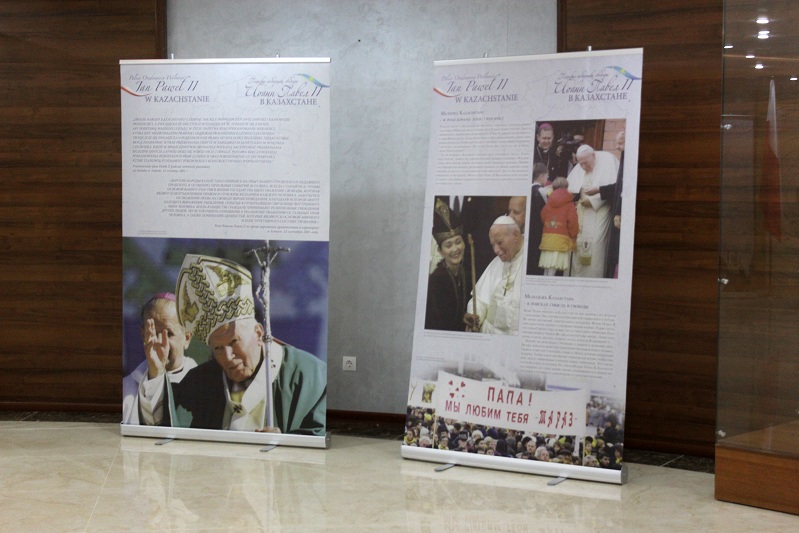 “We brought 12 stands; of those, 10 are devoted to St. John Paul II and his visit to Kazakhstan in 2001. Two weeks ago, the exhibition was organised in Vilnius and a week later in Lvov. There, we showcased materials from his journey to Lithuania and Ukraine. All three exhibitions display stands that are about the apostle of Kazakhstan and priest Władysław Bukowiński,” said Magdalena Okai, programme director of the Pomoc Polakom na Wschodzie (Aid to Poles in the East) Foundation, which organised the event.

Born in 1920 in Wadowice, a southern city not far from Krakow, St. John Paul II was the first Polish pope. He is better known in the country as Karol Wojtyla.

St. John Paul II paid an official visit to Kazakhstan only days after the tragic 9/11 terrorist attacks in New York. During the trip, he repeatedly expressed words of blessing for the country and its people emphasising its important task.

“Kazakhstan, you have the mission of being a bridge between religions, between nations and continents,” he said.

Bukowiński was born in 1904 in Berdyczów, now Ukraine. He served 13 years, five months and ten days of hard labour in a labour camp and was exiled to Karaganda in 1954.

Though he had an opportunity to return to his homeland, Bukowiński chose to stay in Karaganda where he continued his mission until his death in 1974. He also travelled to remote regions of the country.

Bukowiński visited Poland several times, where he met St. John Paul II, who expressed interest in his priest mission, pastoral care and charity work in Kazakhstan. During his visit to the capital, St. John Paul II said he learned about the nation from Bukowiński.

“I am studying and promoting the lessons of the Pope among students at Cardinal Stefan Wyszynski University in Warsaw and The Centre for Thought of John Paul II, which I am representing today. I am glad to be back in Kazakhstan. I visited the country four years ago with my husband. We travelled from Poland to Kazakhstan by bicycle and drove 26,000 kilometres within six weeks. This journey certainty helped me think deeper about the Pope’s trip to Kazakhstan,” said Żukowska-Gardzińska.