By Saltanat Boteu in Tourism on 16 October 2018

ASTANA – The Qonyr Auliye underground cave has become a popular destination for local tourists because of its supposedly mysterious healing potential and a legend about the burial place of Genghis Khan, Tengrinews reports. The destination has the potential to develop into tourist destination for foreign tourists as well. 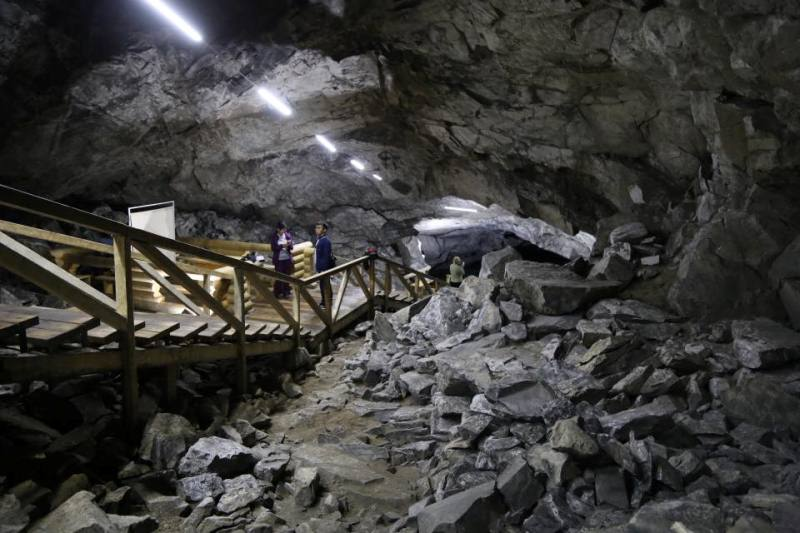 The cave is located in the Aktas Mountains on the right bank of the Shagan River in Abai district of the East Kazakhstan region. From the Kazakh language, the name of Aktas Mountain means “white stone” that reflects the appearance of the chalk mountain.

Qonyr Auliye has a narrow entrance where only one person can fit in. The height of the cave is from three to nine metres, while the depth is 100 metres. The deeper into the cave people go, the wider it becomes. At some point, it turns to a room the width of which is twelve metres and the height is five metres. For the convenience of tourists, the wooden bridge turning into stairs was built inside the cave. The stairs go down to the lake in the cave.

The lake inside Qonyr Auliye cave is considered to be sacred. The approximate dimensions of the lake are 17–18 metres by 12–15 meters. The depth is up to five meters. Although the water is cold (water temperature is only four Celsius), people swim in it. It is crystal clear with a lime taste. People, especially elderly ones, believe that the lake can heal and some of them claim that they witnessed the miracle of being healed.

The cave also has a rich history. Many prominent figures including those who researched the cave came here. Abai Kunanbayev and Mukhtar Auezov, prominent Kazakh writers, visited it. According to Kunanbai Oskenbaiuly, the father of Kunanbayev, the cave was the wintering of Genghis Khan and many years of research showed that Genghis Khan could be buried in it. The prominent Kazakh scientist, ethnographer Akseleu Seidimbek also claimed that.

The Kazakh government took the cave under control as a historical site and it entered the list of 100 national sacred places of the country under the Ruhani Zhangyru (Modernisation of Kazakhstan’s Identity) programme.