ASTANA – Prime Minister Bakhytzhan Sagintayev visited the East Kazakhstan region Oct. 10, meeting members of the public and business representatives and visiting social institutions there. He noted the positive experience of the region in implementing the Menin Mektebim (My School) project and in introducing modern healthcare technologies. The region has opened a unique centre for robotic surgery and transplants. 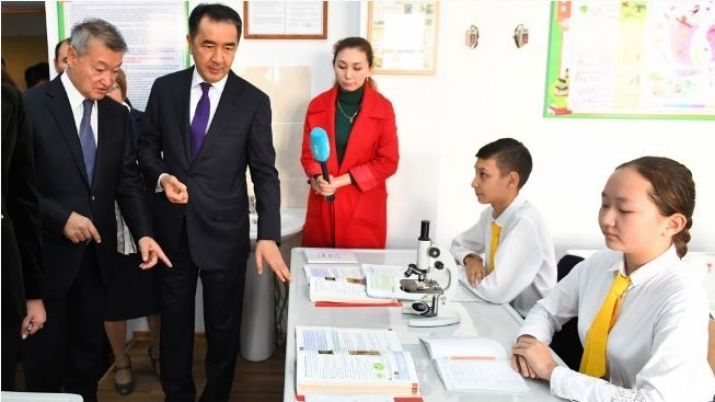 During the trip, Sagintayev visited governmental social institutions to monitor the implementation of the recent state-of-the-nation address and the current state of the region. He stopped by Secondary School 46 of the city of Ust-Kamenogorsk, examining the technical equipment of the school’s physics, biology and chemistry classrooms and checking out inventions by the school’s students in robotics and automated technical systems.

School 46’s newly modified classes are equipped with interactive touch panels, microscopes and other special instruments for chemical experiments and biology observation, said Director of Secondary School 46 Gulfarida Auganbayeva. Its physics class also has software kits for setting up computer measuring sensors and recording their data, kits for electrostatics and radio engineering, multimedia manuals, and reference and instructional wall tables. The IT class is equipped with a Robotis Mini robot, a set of fields for robot competitions, an Arduino Smart Greenhouse educational set, a Tarantula 3D-printer and other equipment. The school also implements the system and methods of Nazarbayev Intellectual Schools (NIS).

According to data from the East Kazakhstan region’s akimat (regional administration), 227 secondary schools are currently modifying their classes according to NIS standards and from Sept. 1 all of them opened fully equipped IT classes. In addition, all schools in the region have internet access and are connected to the Kundelik electronic system of journals and diaries. In total, there are 691 schools educating 187,245 children in the region; 70 percent have computer and multimedia classes.

As part of the digitisation of the country’s healthcare system, 100 percent of state and 97.4 percent of independent medical organisations have implemented medical information systems. All employees are trained to work with the information systems of the Ministry of Healthcare. Digital literacy posts have been created for patients to provide assistance in installing and applying new mobile applications in the registries of medical organisations. The transition to paperless medical records was launched July 1.

Along with social institutions, Sagintayev met heads of enterprises who said they supported the address. During his inspection of a processing plant in Zharminsky district, Sagintayev met with the management of Bakyrchik Mining Enterprise LLP. General Director Yury Ovchinnikov told him the company is considering the issue of raising wages for its employees.

Bakyrchik Mining is developing the largest deposit in the country, the Bakyrchik deposit in the Zharminsky district, the reserves of which are estimated at 280 tonnes of gold with an average grade of 7.7 grammes per tonne. Currently, a project to build a mining and processing complex with a capacity of 2 million tonnes of ore per year, which is included in the region’s programme of industrial-innovative development, is being implemented. The total investment in the company amounted to more than 133 billion tenge (US$361 million). The facility was commissioned in June 2018 and is expected to be operating at full capacity next year.

The enterprise also presented a new project named Kyzyl. Gold reserves at Kyzyl have been assessed at 280 tonnes, and a high gold content noted. During the first nine months of 2018, 311,500 tonnes of ore were processed from Kyzyl, and 12,569 tonnes of gold-bearing concentrate, a finished product, were produced. In the future, the project is considering the exploration, extraction, processing, transportation and sale of gold and other minerals.

Much attention is also given to introducing modern technologies in the framework of Industry 4.0. Bakyrchik has implemented unique technical solutions developed in Finland, South Africa, Germany and other countries. Automated systems used in the factory can reduce human errors in production, secure work and reduce injuries.

The overall picture of the region shows that digitisation and innovative approach is developing in education, medicine and other industries to ease the process of studying and working for the citizens in accordance with the address.