By Zhanna Shayakhmetova in Business on 15 October 2018

ASTANA – The Shymkent-based Ontustik Special Economic Zone (SEZ) received an Editor’s Choice award in the Ones to Watch category of fDi Magazine’s Global Free Zones of the Year 2018, released Oct. 8. 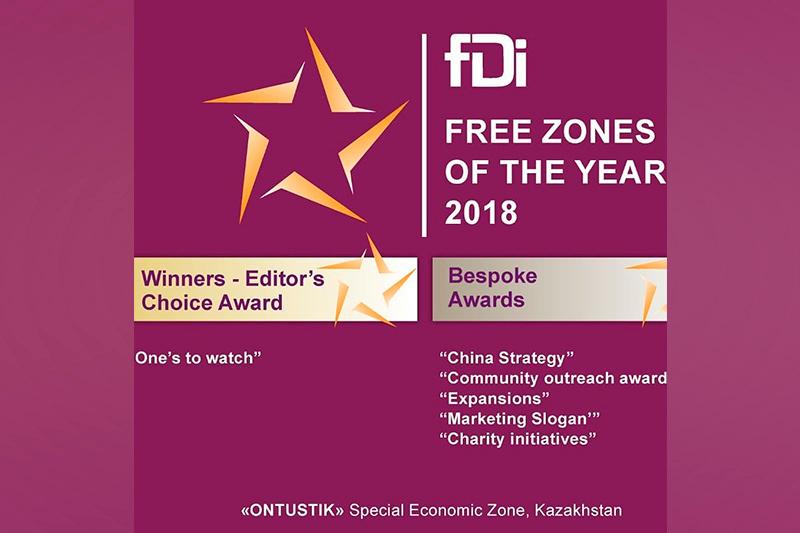 “The zone’s proximities to a supply of raw cotton, as well to a motorway that allows the movement of raw material and finished goods to emerging market countries, are important draws for investors. Investors can access free land for temporary use until 2030, and enjoy tax incentives, a free customs zone and management team support. Ontustik SEZ opened its first representative office in 2017, while also engaging in international roadshows in Turkey, Dubai and South Korea,” reads the fDi release.

The experts noted that “the SEZ was recognised for its China Strategy, having opened its first foreign representative office in the country in 2017 to attract attention from Chinese investors. This resulted in a $140 million manufacturing investment from a Chinese investor in 2018. The zone has also been awarded for its Community and Charity Initiatives, organising multiple events through the year for local youth, minority groups and people with disabilities.”

“The Ontustik SEZ entering the international free zones rating means that the zone has now become a full player in the global investment field. The awards from Foreign Direct Investment Intelligence are a sign of quality and trust for foreign investors and partners. Now, the results of its work have gained international recognition,” reported the press service of Kazakh Invest after the award was announced.

Established in 2005, Ontustik has three priority activities: light industry and chemical and petrochemical manufacturing. Bal Textile, the largest manufacturer of carpets; Azala Cotton, the only cotton yarn factory in the country; Khlopkopromcellulose, a cellulose manufacturer and many other companies operate in the area.

In the Infrastructure Upgrades category, the experts included new infrastructure projects to attract investors, including new roads, electricity supplies and water systems and expansion plans at the Khorgos-Eastern Gate SEZ. Exemptions from customs duties and VAT while importing raw materials or components of finished goods were also on the list.

Pavlodar SEZ was highlighted in the Start-up Support category.

“The resources and raw materials on offer at Pavlodar Special Economic Zone include 100 percent of the region’s aluminium supply, 75 percent of its ferro-alloys and 37.5 percent of its coal reserves,” it is said.

fDi Magazine is published by the Foreign Direct Investment Intelligence Analytical Centre and is part of the Financial Times publishing group. The magazine focuses on analysing trends in the global foreign direct investment market. Foreign direct investment experts annually evaluate the activities of about 50 zones in different nominations.