Key Belt and Road node bears potential for much gain for Kazakhstan, China and beyond

By Elya Altynsarina in International on 9 October 2018 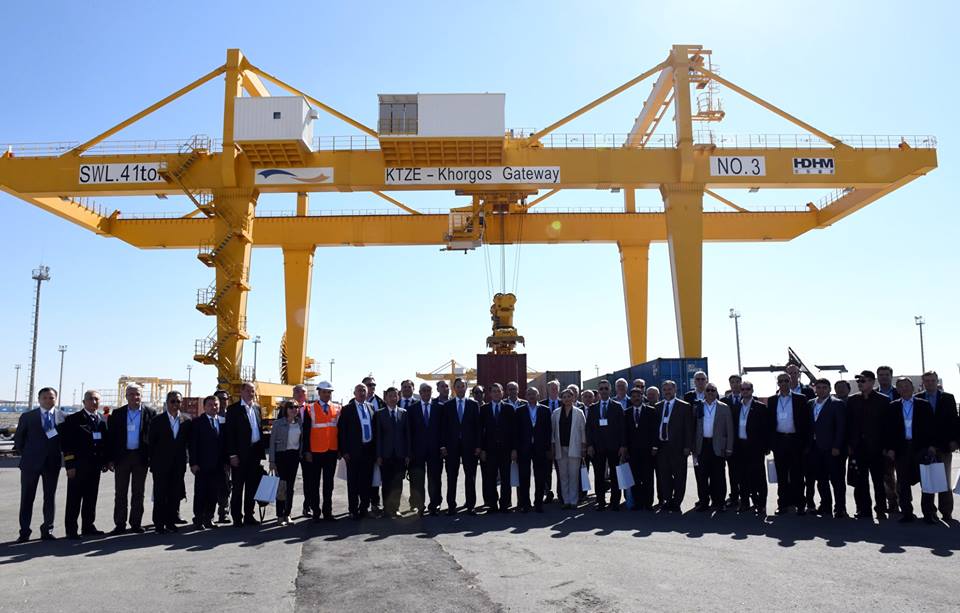 Kazakh officials organised the tour for around 45 foreign diplomats and just as many local and foreign journalists to showcase the facilities’ development and infrastructure and to present opportunities for cooperation with foreign companies.

Khorgos, a dusty point on the border surrounded by brown-coloured mountains, is considered by some to be a key node along the new Silk Road of the 21 Century being recreated as part of China’s Belt and Road Initiative, with a great potential in the not too distant future. 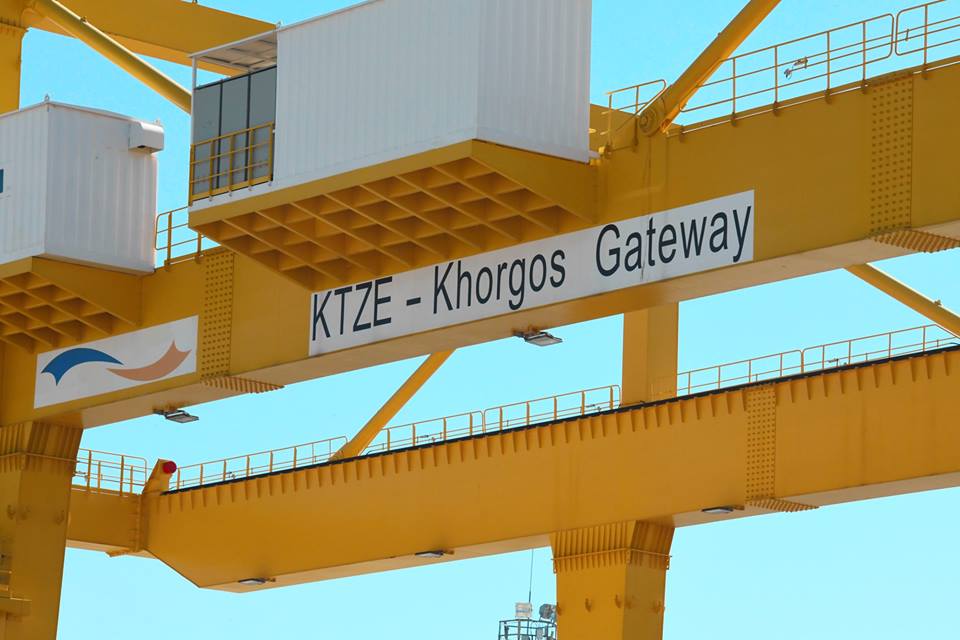 The Khorgos SEZ was established in 2011 and is part of Kazakhstan’s Nurly Zhol (Bright Path) infrastructure development programme to reconnect once disparate regions of the country. It was launched to transform the country into a key transit conduit between China and Europe and between Russia and countries to the south.

Kazakhstan has invested $30 billion over the last 10 years in its transport and logistics infrastructure and by 2020 will spend an additional $8.4 billion to revive the ancient Silk Road on its territory, KTZ President Kanat Alpysbayev told the visitors gathered against the background of containers being reloaded from narrow-gauge platforms to wide-gauge ones. One specific result of this massive spending already is the construction of 2,500 kilometres of modern railways across Kazakhstan, he noted.

Khorgos has significantly impacted the Almaty region, which shares a 700-kilometre border with China and is one of the largest agro-industrial and fastest growing parts of Kazakhstan, Almaty Akim (Governor) Amandyk Batalov told tour participants.

The Almaty region is one of five Kazakh regions through which transcontinental transit projects pass, including the Western China – Western Europe transcontinental and other national highways. The region trades with 90 countries and its international trade totalled $654.7 million between January-May 2018.

Infrastructure that has already been implemented as part of the Nurly Zhol programme has provided a logistics chain from the Port of Lianyungang in eastern China to Europe via Khorgos dry port, further reaching the Caspian Sea, and crossing the Caspian waters to Caucasus. 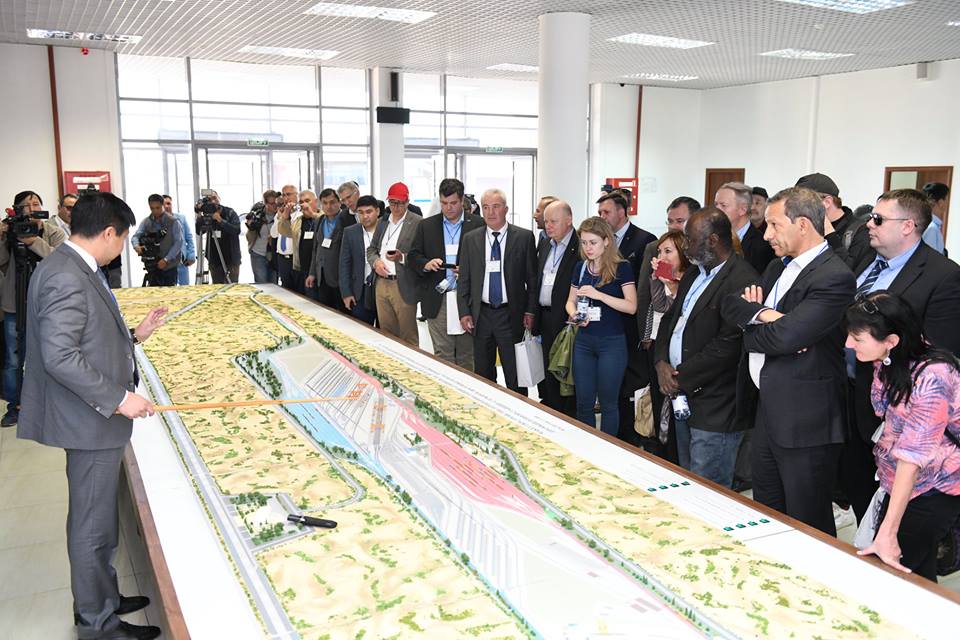 “Not only China and Europe, but countries of Central Asia, Caucasus, Turkey benefit from this as it connects the container multimodal routes of the Trans-Caspian international corridor,” Minister of Foreign Affairs Kairat Abdrakhmanov told the gathering.

Abdrakhmanov, who said he is a native of the region, noted how the infrastructure development programme has transformed the lives and fortunes of the area allowing local residents to reduce travel time and explore opportunities.

Khorgos, located 350 km north-east from Almaty, is now connected to Kazakhstan’s most populous city by a modern high-speed highway, allowing for a one-way car trip in approximately two and a half hours. Most transit transportation is done by railways, including thanks to a stretch of newly built railways connecting Khorgos with a station of Zhetygen near Almaty.

“Its (programme’s) outcome exactly coincides with the state-of-the-nation address of Kazakh President Nursultan Nazarbayev, which he presented yesterday, which puts wellbeing of our fellow citizens on the top of everything,” he stressed.

Batalov noted newly built houses for employees of the SEZ and ICBC, and also showed an area near the dry port where a new town is planned to be built.

The region’s administration is anticipating an increase of transit cargo up to five million tonnes annually by 2030 with the creation of 212,000 permanent jobs at the Zharkent-Khorgos agglomeration, so it is also planning to build the town of Nurkent with an estimated 100,000 residents by 2030.

“Annually 24,500 new permanent jobs are created, and 10,000 new jobs will be created just at Khorgos. Given the family factor, it means there will be a population growth of 50,000 people here alone,” he said.

Batalov added that for a region with favourable geographic and climate conditions, rich in natural resources and playing host to dozens of transnational businesses, the population growth and development of human capital are certain.

“Investors come after the benefits offered by Kazakhstan for joining the Khorgos hub,” said Alpysbayev.

Kazakh government officials have said they believe the tax breaks, free land concessions and access to regional networks at the distribution centre functioning under “single window system” are critical to Khorgos’ success.

Tax breaks and incentives are being offered up to 2035 to companies registering as participants of the Khorgos Eastern Gate SEZ, said its Chief Operating Officer Hicham Belmaachi.

In 2017, the Khorgos dry port and the nearby Altynkol train station processed more than 200,000 twenty-foot equivalent unit (TEU) containers from 17 Chinese provinces, Vietnam and South Korea travelling to Central Asia, Europe and back.

“Now investors at Khorgos are implementing projects worth $1.7 billion, but the competition and interest in the area spiked after COSCO Shipping, a major shipping and logistics services supplier company joined the dry port,” Alpysbayev noted, referring to last year’s deal by which COSCO and the Port of Lianyungang have jointly acquired 49 percent of the Khorgos dry port.

“Our estimate of Kazakhstan’s transit potential is at 2 million TEU by 2020 annually,” he also said, noting that this year Kazakhstan is to transit more than 300,000 TEUs in east-west and north-south directions.

Alpysbayev added that the success of China-Europe-China transcontinental container shipments depends on cooperation with Russian and Belarusian railway companies with whom KTZ has established the United Transportation Logistics Company – Eurasian Rail Alliance (UTLC ERA) to coordinate all related work.

While the dry port focuses on warehouses and cargo transit, neighbouring Khorgos ICBC offers trade, economic and tourist services to both companies and individuals.

The 760-hectare centre was established in 2002 on the Kazakh-Chinese border. It has Kazakh and Chinese “sides” linked via a “special passage zone” with visa-free access for up to 30 days and special tax and customs preferences.

“In the past, one could not have imagined that today honourable ambassadors and envoys from across the countries of Northern Europe to Brazil in Americas, Africa and Eastern Asia could visit this remote part of Kazakhstan to discuss potential of joining this great initiative of reconnecting the nations and surpassing our challenges by cooperating,” Abdrakhmanov said.