By Dilshat Zhussupova in Nation on 22 October 2018

ASTANA – Investing in youth is crucial for fostering an economically dynamic, peaceful, inclusive and sustainable society for the future, concluded the Kazakh Mazhilis (lower house of Parliament) members at the Oct. 19-20 conference “Investing in Youth: Leaving No One Behind” held in the capital. 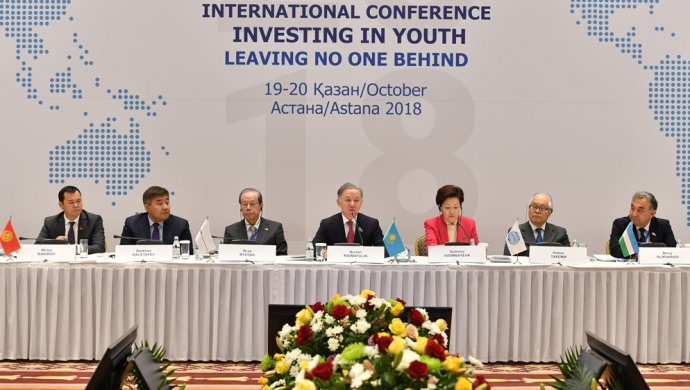 The conference was organised by the Mazhilis, Ministry for Social Development and Asian Forum of Parliamentarians on Population and Development (AFPPD). Participants from more than 35 countries gathered to discuss current issues affecting the rights and interests of young people and exchange legislative experience on creating and implementing state programmes on youth development.

The Kazakh population currently includes approximately four million people aged 14-29, 2.3 million of whom live in cities and 1.7 million in rural areas. According to the 2016 Global Youth Development Index, the nation ranks 61st among 183 countries.

“The most progressive and actively developing countries rely on young people, recognising that their expenditure is an investment in the future,” said Mazhilis chairperson Nurlan Nigmatulin. “Kazakh youth are an important factor in enhancing national competitiveness.”

In his state-of-the-nation address, “Growing welfare of Kazakh citizens: increase in income and quality of life,” President Nursultan Nazarbayev singled out the comprehensive support of young people as a state policy priority and proposed 2019 as the Year of the Youth.

Kazakhstan’s youth policy is designed to create the conditions for the younger generation’s comprehensive development, participation in the decision-making process and socialisation. Its priorities include addressing the 3.9 percent youth unemployment rate.

Additional issues include suicide rates and early motherhood. More than 5,000 girls aged 15-18 become pregnant each year, with every fourth opting for an abortion, according to Minister of Social Development Darkhan Kaletayev.

Panel discussions at the conference included “Expanding Opportunities for Education and Employment of Youth and Improving Linkages and Transitions,” “Improving the Health and Wellbeing of Youth through Universal Access to Health Information, Education and Services,” “Promoting the Full Participation of Youth in Civil, Political and Social Affairs” and “Opportunities and Risks for Youth in the Context of Globalisation.”

An outcome document, including the contributions of all participants, was presented for adoption at the conclusion.