ASTANA – Kazakhstan and Uzbekistan, sharing not only the border, but culture, history and spiritual values, have enjoyed a dynamic partnership over the years, with the bilateral ties withstanding the test of time, said Uzbek ambassador to Kazakhstan Saidikram Niyazkhojaev in an interview with The Astana Times. 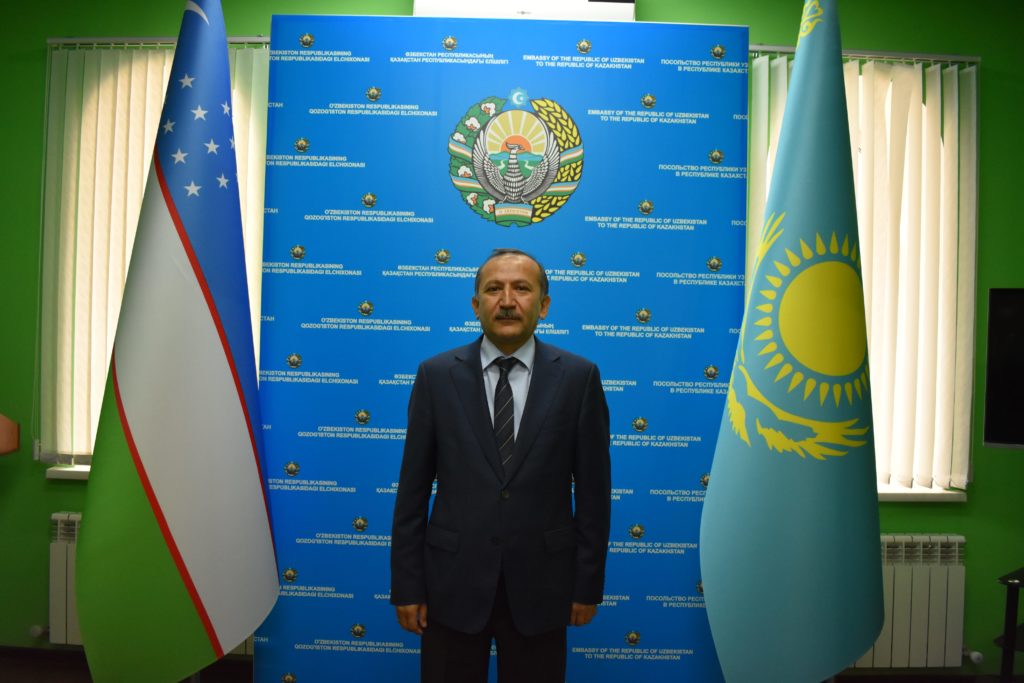 The nations established diplomatic relations in 1992. A year later, Uzbekistan opened its embassy in Almaty, relocating to the capital earlier this year, and the Kazakh embassy opened in Tashkent in 1996.

“If we look at history, we all lived in this region in what is now known as Central Asia and drank water from one river. Spiritual values, cultural closeness and customs are intertwined in such a way that it becomes difficult to differentiate. The language culture and language itself are very similar. We lived close to each other, worked and raised our children and we have never had any disagreements and this has been so until the present. We supported each other through difficult times in all aspects,” he said.

The ties grew stronger with Uzbek President Shavkat Mirziyoyev’s first visit to Kazakhstan in March 2017 that coincided with the celebration of Nauryz, a common holiday marked throughout the Turkic world.

Mirziyoyev’s visit to the capital and Kazakh President Nursultan Nazarbayev’s subsequent trip to Tashkent provided a “new impulse to bilateral ties” and their close bond advanced cooperation to a “new level of strategic partnership.”

“Such new dynamics in the context of bilateral ties created a new architectural landscape in the entire Central Asia,” said the envoy.

Intensified cooperation between Kazakhstan and Uzbekistan also serves to rekindle regional bonds that have been strained in the past by an array of issues, including border matters, water management and security.

In March, heads of five Central Asian countries gathered in the capital for a consultative meeting initiated by Mirziyoyev and chaired by Nazarbayev, the first such regional meeting in almost a decade.

“He (Nazarbayev) supported the suggestion of Uzbekistan to meet frequently and discuss issues of a regional nature and galvanise efforts to boost development within our region and reach progress in all areas,” said Niyazkhojaev.

The two countries are working now to improve trade turnover. During their meeting, Nazarbayev and Mirziyoyev noted the need to increase the figures and reach $5 billion by 2020.

The figure was estimated at $1.9 billion from January-August and this year the sides seek to bring it to $3 billion.

“Yet, amidst the conditions of ambiguous processes of global economy, escalation of trade wars and increasing protectionism, for the key issues of maintaining such a high dynamic, we work to simplify customs procedures as much as possible and eliminate any barriers and limits in trade, including technical obstacles. In this context, we try to use a full functioning free trade zone of CIS (Commonwealth of Independent States) nations and form mutual markets,” he said.

He believes the $5 billion objective is not the ceiling, as the countries “have all resources to aim higher,” and feels developing joint projects are central to reaching that goal.

“We are now considering opening enterprises on the territories of the two countries, because our economies are complementary. We work to create such industries that will produce products with high added value that we can then supply to other countries. This can meet demands of consumers both in terms of prime cost and quality,” he added.

Though the potential for cooperation is high across many areas, Niyazkhojaev noted car engineering, energy, the technical field, pharmaceutics and agriculture are among most promising. In areas such as car engineering, partnership has already shown positive results.

“We have a joint plant manufacturing cars under the Ravon brand and we will continue the work to increase its capacity and produce new types that are in demand in Kazakhstan,” he said.

He also indicated a “comprehensive transport infrastructure” both in Kazakhstan and Uzbekistan can help turn Central Asia into a transport and logistics hub.

“We need to note that under the leadership of the Kazakh President, there is a unique transport network that allows transporting goods in a very short period of time. This dense network of railroads and highways and their coordination will enable developing our ties and attract other partners in the region,” he said.

Kuryk port launched in 2017 and part of the Trans-Caspian International Transport route opens bigger prospects in the field.

“We are also interested in it. An Uzbek delegation led by the first deputy minister took part in the opening ceremony. We are interested in accessing markets in Europe and Russia through the Kazakh transport network. All conditions are set for this. Similarly, Kazakh producers can supply their products to Afghanistan, Tajikistan and other countries close to Uzbekistan,” said the diplomat.

Agriculture is another important area for the two countries.

“Within eight months, Uzbekistan imported food products worth more than $400 million, which is 1.6 times more compared to the same period in 2017. Kazakh products account for 36 percent of this amount. Nearly 50 percent of food products exported by Uzbekistan were meant for Kazakhstan,” he said.

Kazakhstan’s involvement in digitisation is of interest to Uzbekistan.

“Kazakhstan has vast experience in economic digitisation and implementing the Digital Kazakhstan programme. We are ready to cooperate in introducing advanced digital technologies in industry, agriculture, finance and public private partnership,” he added.

Ensuring peace and stability, however, is a priority.

“We highly appreciate and support Kazakhstan’s efforts in ensuring security and strengthening regional cooperation and in this context, we should note the big work of Kazakhstan as a non-permanent member of the United Nations Security Council. The Kazakh side has made strides in ensuring stability in the Central Asian region and beyond, including on the Syrian issue,” said Niyazkhojaev.

He noted the growing threat of international terrorism and youth radicalisation are of great concern.

“Terrorist structures possess significant financial resources, advanced information and technical tools and have high mobility. They are also conducting informational work and their relocation from the Middle East to Afghanistan is becoming increasingly common,” he noted.

Kazakhstan and Uzbekistan have united efforts in bringing stability to Afghanistan, actions Niyazkhojaev believes should be completed through political means.

“All have to sit at the table for negotiations,” he added.

He emphasised the recent conference in the capital focusing on Afghan women and seeking ways to provide more opportunities to empower them as contributing to stability and peace. The goal, he said, is to turn the region into a “zone of peace, cooperation and security.”

Niyazkhojaev also noted a growing mutual interest among citizens of Kazakhstan and Uzbekistan.

“In [the first] half of this year, 1.9 million Uzbek citizens visited Kazakhstan and nearly one million from Kazakhstan visited Uzbekistan,” he said.

Tashkent also supported the recent Kazakh initiative to introduce a single Central Asian visa in an effort to bring more tourists to the region.

“We are considering this issue. We are currently promoting a Silk Road brand together and developing joint tour packages in Kazakhstan and Uzbekistan, so that tourists coming to us can get fully acquainted with the history of our region, where the Silk Road once passed through Taraz, Turkestan, Shymkent, Tashkent, Bukhara and Samarkand,” he said.

“One thing is to introduce it, but another is how it will be working. We need an infrastructure for that,” he added.