By George Baumgarten, United Nations Correspondent in International on 3 October 2018

NEW YORK – Kazakh Foreign Minister Kairat Abdrakhmanov briefed the United Nations General Assembly Sept. 28 on a host of Kazakhstan-related issues, including the country’s efforts for international peace and its desire to join the 30 most-developed nations. 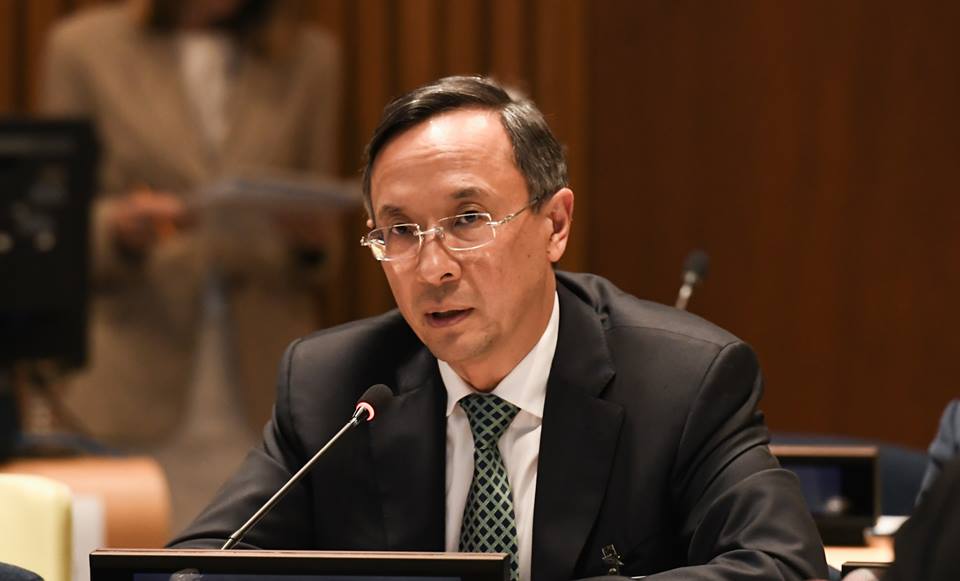 His remarks were part of the assembly’s annual General Debate, in which representatives of nearly all nations present their worldviews.

On international security, Abdrakhmanov noted Kazakh President Nursultan Nazarbayev’s manifesto, “The World. The 21st Century,” which calls for “peaceful dialogue and constructive negotiations on the basis of equal responsibility for peace and security.”

Abdrakhmanov added that millions of people “live under the shadow of dreadful wars, such as in Syria, Yemen and many other corners of the globe.”

Abdrakhmanov also discussed Kazakh efforts to stabilise Afghanistan, including efforts to empower Afghan women and girls. He said Afghanistan has been a priority during Kazakhstan’s term of the U.N. Security Council.

He also praised the U.N. Global Counter-Terrorism Strategy (GCTS) and U.N. Secretary-General Antonio Guterres’ efforts to reform the U.N.’s “peace and security architecture,” including reform of the Security Council.

Abdrakhmanov also noted lessening of tensions on the Korean Peninsula and the need for the preservation of the Joint Comprehensive Plan of Action (JCPOA) with Iran, commonly referred to as the “Iran Deal.”

He also reminded the assembly of Kazakhstan’s closure of the Soviet-era Semipalatinsk nuclear test site and the country’s initiative adopted by the UN to designate Aug. 29 as the International Day against Nuclear Tests.

On economic issues, the foreign minister briefed the assembly on Kazakhstan’s efforts to join the world’s 30 most-advanced economies by 2050 and the country’s plans for its participation in the “Fourth Industrial Revolution.” He also said Kazakhstan’s G-Global Initiative is a vehicle to deal with economic and financial problems.

He also noted that Kazakhstan, as the world’s largest landlocked country, has made efforts to move from a state of “landlockedness” to one of “landlinkedness.”

Abdrakhmanov also noted Kazakhstan is cooperating with other Central Asian countries to utilise the region’s political, economic and cultural potential as a “common resource.”

He cited the Council of Turkic-Speaking States, the International Aral Sea Fund and efforts to create a Central Asia nuclear-weapons-free zone as important areas of cooperation.

He also mentioned a recent Caspian Sea Summit in Aktau and Kazakhstan’s support for the founding and functioning of the U.N. Regional Centre for Preventive Diplomacy in Central Asia.

On the United Nations Sustainable Development Goals, Abdrakhmanov noted that Kazakhstan has offered to create a special UN regional hub in Almaty. He also noted Kazakhstan’s hosting of EXPO 2017 with a focus on future energy and Kazakhstan’s newly established International Centre for Green Technologies on the premises of EXPO in Astana.

He said the Sustainable Development Goals are essential to achieving “hard security.”

Among other topics, the foreign minister also mentioned that Kazakhstan will soon host in Astana the triennial Congress of Leaders of World and Traditional Religions.

“Only through our collective will and solidarity can we turn this world in crisis into a world of hope and promise,” he said.