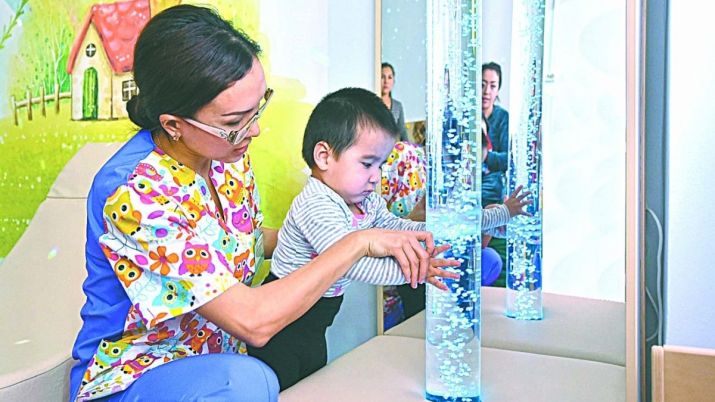 The condition is such that there is no cure and affected individuals experience only temporary relief.

“This condition is an extremely rare genetic disease, which is inherited and characterised by bone fragility,” said the Zhambyl region’s children’s hospital physician Azat Satzhanov.

In Kazakhstan, there are relatively few bearers of OI, with approximately 50 children affected. Those affected nevertheless experience tremendous pain.

“This is due to a violation of the metabolism of collagen. It is caused by the process of gene mutation,” explained Satzhanov.

A child with OI may suffer an average of 50-100 fractures per year. Hence, many are afraid to carry out simple movements, such as walking or sitting.

In addition to pain medication, physical therapy and braces or wheelchairs, surgery may be undertaken as treatment, in which metal rods are inserted into bones to strengthen them. Still, surgery is only a temporary fix because bone growth necessitates the frequent replacement of rods.

“To address this problem, we developed and patented a modified telescopic fixer for the femur, which consists of a rod, hub and locking screws. Its shape resembles a retractable antenna,” said the physician.

According to him, surgeries are often painful procedures for children and may lead to new injuries. Furthermore, as a child grows, a usual metal rod requires replacement at least once a year for each tubular bone. If the new instrument is used instead, the number of necessary operations may be significantly reduced to once every two to three years.

Satzhanov, along with the Astana Medical University professors Vasily Lozovoy and Roza Karabekova and the National Scientific Center for Maternal and Child Health physician Bolat Nagymanov began developing the instrument in 2016. Three out of four children with OI in the Zhambyl region have since received the treatment.

The Polish company ChM, which manufactures implants and instruments for traumatology and orthopaedics, has expressed interest in the innovation, and mass production is currently under consideration.