SINGAPORE – In an interview with Exclusive magazine, Bilahari Kausikan, ambassador-at-large and policy advisor for Singapore’s Ministry of Foreign Affairs, said he believes Central Asia needs to come together more, starting from developing better communications within the region. 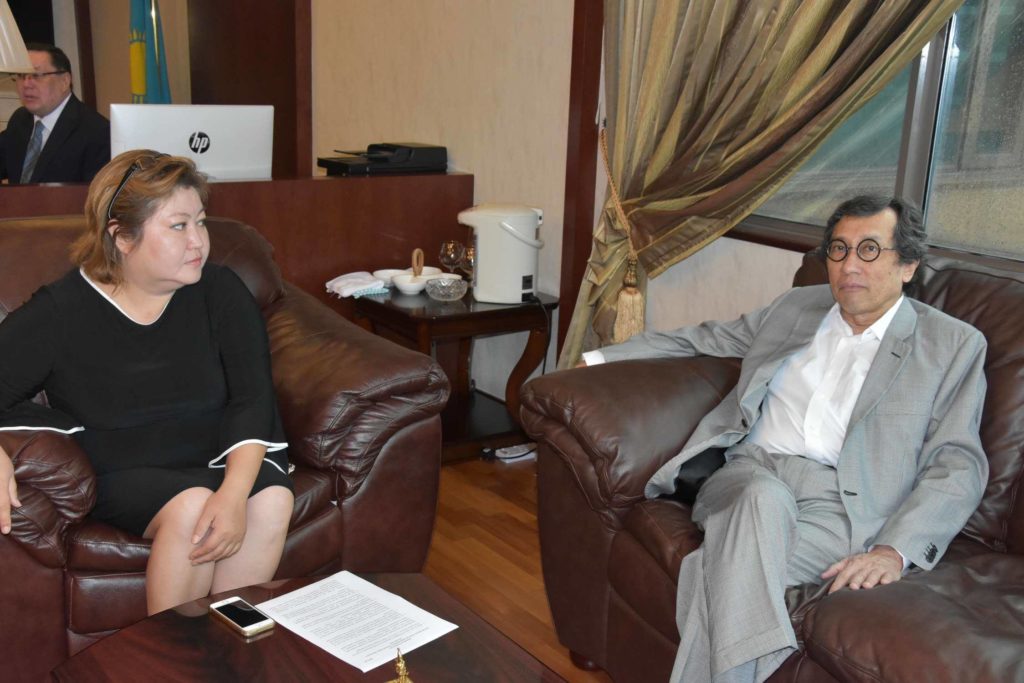 How do you assess the integration processes that have begun in Central Asia?

They are very important, but they have just started. In this regard, you will need to work more on the common goals of your region. So far, all communications take place in a bilateral format, but it is worth trying to develop intra-regional communications more intensively. And in this context, most important is the collective development of goals and objectives. Although, apparently, in the foreseeable future, bilateral relations will prevail – too great is the difference in the pace and stages of development.

I agree with you, but this is exactly the problem of developing these common regional approaches. How did this process take place your country? It is always difficult to be friends with countries close to you. Nevertheless, Southeast Asia today is perceived as a large, unified and very promising market.

Current problems in your region can be divided into two groups. The first group relates to the problem of self-identification of Central Asia. You should start by consolidating your positions. I understand that among the six countries of Central Asia, some countries are not willing to take such a step, but there is no alternative. Secondly, you need to be able to convince your two big neighbours that regional consolidation of Central Asia does not threaten their interests. On the contrary, it serves them well.

As for the second group of problems, I would like to note that the interest among the 10 ASEAN countries in Central Asia is completely different. For example, Vietnam is already a partner of the EAEU [Eurasian Economic Union] free trade zone, and Singapore is currently negotiating to become a party to this treaty. Other countries do not yet show such interest, which is most likely due to a lack of information. Today, one of the tasks is to raise awareness among ASEAN countries about Central Asia.

I totally agree that at least the information distance should be reduced – in geographical terms, we live in Asia, after all. I remember very active efforts to establish an expert dialogue between our regions in the 1990s, but then we saw either mutual disappointment or no quick wins, and this dialogue almost faded away. Any process begins with expert dialogue. What platforms could resume the discussion, in your opinion?

I remember that after gaining your independence in 1991, your President Nursultan Nazarbayev initiated the establishment of the Conference on Interaction and Confidence Building Measures in Asia (CICA). We held meetings, but in the 1990s each of us took up our own internal problems and we went our separate ways. As you know, in the early 1990s, the situation in Central Asia was quite unstable. Now everything is more or less predictable. Of course, we have a much better situation in Singapore, but we also have our own difficulties. Therefore, CICA may serve as one such platform. I think that now is a good time to give this initiative a second wind. This second option can be based on links between experts, between think tanks. You can involve Japan, Korea, China and India in this dialogue. India is very important for Central Asia. Do not forget to include Russia. One of the key elements of these processes should be confidence building between the participants of the dialogue. Moreover, as you said earlier, we should reduce the mental distance between people. The main thing is not to set very ambitious goals.

When we considered why the expert dialogue was almost extinguished, we came to the conclusion that in addition to these reasons, the truth was that expert opinions and recommendations had not been sincerely considered by our government, our businesses. How have you built the relationship between think tanks, government and business here?

In Singapore, all analytical institutions and centres are funded by the state budget, but at the same time they are fully independent in their research. It seems to me that in order to ensure the effectiveness of experts, it is necessary to engage, first and foremost, representatives of the business community – but not the state, otherwise it will complicate the process. One of the main points is the involvement of the younger generation of experts. The way the old generation, accustomed to working in state structures, thinks, and the way the new generation thinks, are completely different things. Currently, in addition to the psychological distance, we have problems of geographical remoteness from each other, but this once again can be solved through the use of the internet. Perhaps it makes sense to start with a virtual community as a more cost-effective way.

Can China’s Belt and Road Initiative become a backbone for expert dialogue among the countries involved in it?

You should be careful with this project. At the 16th National Congress of the Communist Party of China in 2012, its leaders recognised that the rapid economic growth achieved in 1990 to 2010 had stopped. The model which ensured such growth had reached its own limits. Why? Because two factors came into heated conflict: market efficiency and the necessity of maintaining party control. It is still not clear how to maintain a balance between these factors. Therefore, the Congress was held in a tense atmosphere. Five years have passed, nothing has changed, the old model continues to be applied, and [Chinese President] Xi Jinping approached the issue differently at the 19th Congress last year. He reformulated it as follows: we need to solve the problem by combining the expectations of the people and the unbalanced economy. In general, his speech at the 19th Congress of the Party was addressed to domestic residents of China, but not to the international community, contrary to the assertions of international mass media. In fact, he addressed his fellow citizens. Ensuring stability and sustainable development needs money. For this reason they decided to apply the old model outside China, and to build large infrastructure projects by involving state enterprises, but outside China. Kazakhstan, unlike other countries, is in a unique situation. You possess enormous resources and, to a large extent, you can afford not to be dependent on external creditors by using internal resources. You do not need money; you need managing and technical experience. You need to import this instead of borrowing money from abroad and importing goods. And the most important thing is that you should not attract loans only from one country, particularly from China. It would be quite an unbalanced policy.

You have raised one more immense challenge: To what extent should the government control the country and what should be its role? International observers strongly recommend that we reduce the government’s presence in our economy, and we have genuinely tried to do so.

When I worked as an ambassador in Russia, I witnessed shock therapy, when the government tried to fully transform the country in 500 days. It was a disaster and Russia still feels its consequences. I am a supporter of gradual reforms. The question is whether Kazakhstan has enough experience and knowledge for efficient privatisation. Foreign investors are quite cautious about Kazakhstan. Moreover, you should keep in mind that Western recommendations are not the ultimate truth. If we apply Singapore’s experience, we have Singapore Airlines, where the state is a major owner as in other profitable companies. The difference is that we own these corporations, but do not interfere in their work. Corporations are managed by businessmen, and their aim is to make money. How they do it is their prerogative. Another thing is that we should keep in mind social components: it is necessary to understand how many people are employed in these state enterprises and how many people would be unemployed in the future. It will have a direct impact on social stability in your country.

When you recommend not setting too ambitious goals, one recalls that Kazakhstan has had a lot of country strategies. However, the first of them was clearly focused on the experience of the Asian Tigers, which built efficient markets in authoritarian regimes. Do you think Asia is still an example for us to follow in this context?

Singapore is not the best example to follow. Korea, China, Japan have similar development experiences. They all started as authoritarian regimes and it was necessary in the early stages in order to clearly follow the instructions developed by government. They all started as agricultural countries with distribution of lands to farmers, and then they gradually came to industrialisation, developed their own industry and achieved success step by step. Now in our region, taking into account the rapid development of technology, countries like Taiwan, Thailand and Indonesia may not repeat the steps made by China, Japan and South Korea. It does not make sense to copy them. Vietnam has a really good chance of breakthrough. More likely, Indonesia and Malaysia have already reached the peak of their growth. It is hard to predict the future of Laos and Cambodia.

Now, China, Japan and Singapore do not have the advantages that they had before – cheap labour power. But we are trying to replace cheap labour power with robots. That is why we see the rapid development of robotics and artificial intelligence. Robots are good because they do not need to eat, do not need to sleep, they do not go on strikes and they can be used to the maximum extent.

I think Kazakhstan has a great future. Your enormous resources are both dangers and opportunities. I like that you invest a lot in education. And it is right. I would like to remind you that Russia wanted to become yet another European country very much, but it ended up in a big disaster. That is why [Russian President Vladimir] Putin has now given up on that and this is the secret of his popularity. After all, Kazakhstan is an Asian country, so you should use the experience of Asian countries more. However, at the same time, you should be in constant search of your unique model. Kazakhstan has achieved more than foreign analysts expected. I am sure that you still have a chance to surprise the world.

This interview first appeared in Exclusive magazine. Karlygash Ezhenova is editor-in-chief of this magazine.