By Staff Report in Culture on 25 September 2018

A novel by Kazakh prose writer Saken Zhunusov called “Amanai and Zamanai” has been translated into English and was recently presented in the framework of the Rukhani Zhangyru programme. 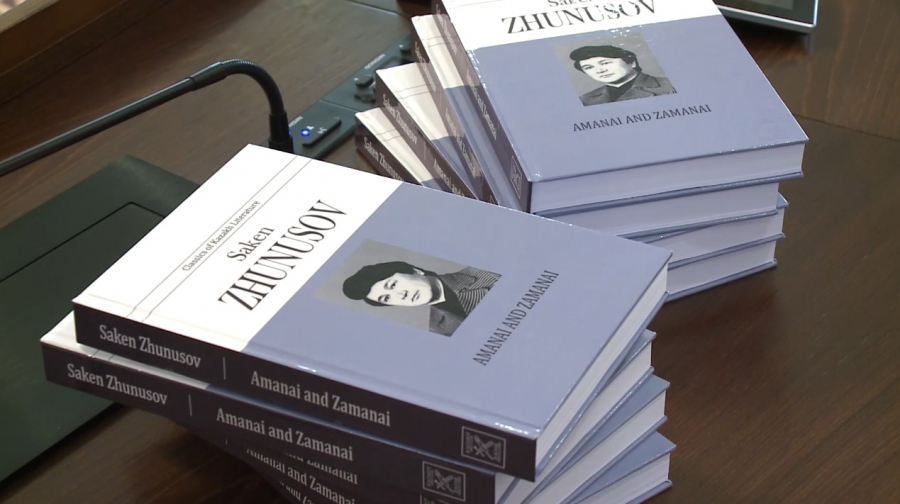 That significant event associated with the name of the famous countryman, was attended by the members of the Akmola regional branch of the Union of Writers of Kazakhstan, scientific and creative intellectuals and relatives of the writer.

“The work by Saken Zhunusov holds its rightful place in the golden fund of the Kazakh literature. And the book was published thanks to Akmola businessmen who financed the translation and publication in London”, said Akim (Governor) of the region Malik Murzalin.

The project is implemented on the initiative of the Kazakh PEN Club. In recent years, it has translated and published in London and New York approximately 10 works by Kazakh classic writers.

“They published works by Mukaghali Makatayev, Berdibek Sokpakbayev, Abish Kekilbayev, Olzhas Suleimenov, Smagul Yelubai, Herold Belger, and Mukhtar Auezov. As part of the project called ‘We – the Kazakhs…’ it is planned to translate the 25 best books of the Kazakh authors,” said President of the Kazakh PEN Club Bigeldy Gabdullin.

The novel was translated by British writers and translators Simon Hollingsworth and Simon Geoghegan.

Simon Geoghegan said that they had been working on several translations of the Kazakh classics for more than two years. According to Geoghegan, the book “Amanai and Zamanai” should be presented to the world. It tells about the turning point in the history of Kazakhstan. And it is very important to enrich the world community by such reports about these events, thoroughly studied and comprehensively described by such prominent writers as Zhunusov.

His colleague said that for 20 years they had been working together on translations of books.

From Hollingsworth’s point of view, it is important to have several competent opinions in translation: one translates, another edits, the third one checks the quality of translation, so that it would be worthy of the author’s text. Their task is to convey the voice of the author, most importantly, this book should be correctly understood by the English-speaking audience. They are honoured to work on such masterpieces of the Kazakh classics.

The writer’s sister Roza Zhunusova addressed the presentation ceremony with a thank you speech while members of the public also spoke. According to researcher Nurbolat Almenov, the collections of the regional museum of literature and art include more than 200 exhibits from the personal belongings of the writer.

In September, the book by Saken Zhunusov “Amanai and Zamanai” will be presented in English to the English audience in the presence of the literary press and the UK’s leading universities. The book will be sent to the libraries of Oxford, Cambridge, London University and others. In addition, “Amanai and Zamanai” is already available through Amazon.com.