By Elya Altynsarina in Business on 27 September 2018

ASTANA – First Deputy Prime Minister of Kazakhstan Askar Mamin and First Vice Premier of the State Council of China and co-Chairman of the Kazakhstan-China Cooperation Committee Han Zheng oversaw the signing of agreements and contracts for 11 new joint projects worth $1.9 billion during Mamin’s Sept. 26 visit to Beijing. 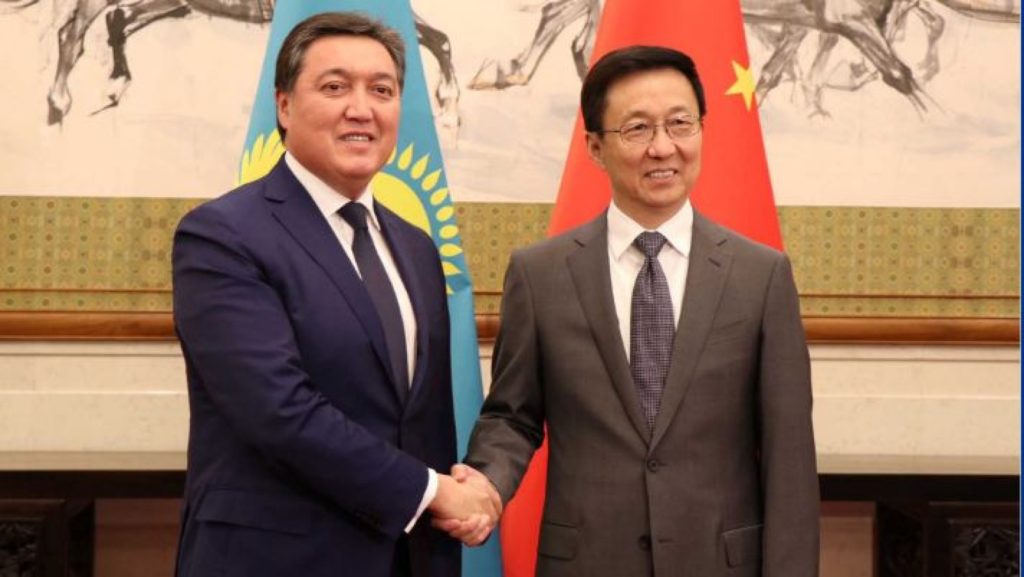 “Thanks to the leaders of the two states, President Nursultan Nazarbayev and Chairman of the People’s Republic of China Xi Jinping, Kazakhstan and China have achieved a high level of cooperation across the spectrum of bilateral relations. The conjugation of the Nurly Zhol Infrastructure Programme of Kazakhstan and the Belt and Road Initiative of China has led to a high level of investment cooperation between our countries,” Mamin said during the talks.

China is one of Kazakhstan’s primary trade partners with bilateral trade growing 30 percent in 2017. Both heads of state have set a goal of achieving a $20 billion trade volume.

The sides also discussed bilateral cooperation in energy, transport and logistics, agriculture, industry, as well as the development of cross-border and inter-regional ties.

Mamin said the Kazakhstan-China Cooperation Committee is an important component of bilateral relations.

Kazakhstan and China are implementing 51 joint projects in industry, transport and logistics worth approximately $28 billion. The projects are expected to create large-scale production of products for international export.

According to the press service of the Prime Minister of Kazakhstan, Mamin discussed development of transcontinental transportation and further development of the joint terminal and FEZ Khorgos – East Gate with Head of COSCO Shipping Corporation Huang Xiaowen and Chairman of the Port of Lianyungang. He stressed the importance of the participation of the “Big Six”, the major banks of China involved in investing in Belt and Road projects, in the work of the Astana International Financial Centre (AIFC) and considered cooperation in financial sector during the meeting with the Head of China Construction Bank Wang Zuji. The delegation of Kazakhstan later met with the leaders of the provinces of Henan, Sichuan and Chongqing.

Agreements and contracts signed following the trip include a roadmap to construct “a TV production plant in the territory of Kostanai Industrial Zone in 2018-2019.” The project’s initial stage investment will be $50 million and the plant will produce three million units per year.

The other contracts are between Kazakhstan Temir Zholy national railways company, Huawei International Co. Ltd and Ili Baitexing Commercial Trading Co. Ltd. on the development of e-commerce, and the Roadmap for the implementation of “Production of agricultural and road construction equipment” between JSC Agromash Holding of Kazakhstan, Kazakh Invest, Lovol Heavy Industry and YTO Group Corp.