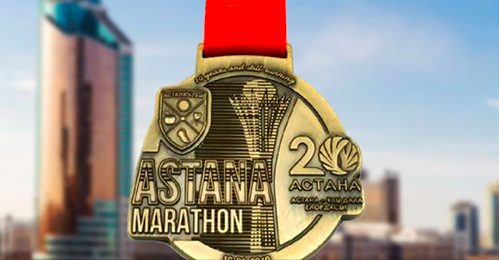 Each participant noted his reasons for running.

“Running gives me a great opportunity to be alone, to think about some questions, to prepare a solution. In addition, running helps a person to observe a strong discipline and maintain good physical condition. Participation in marathons trains people’s endurance and strength of mind. We formed a team of the Foreign Ministry and thereby reaffirmed our diplomats’ commitment to active participation in the mass sports that are held in our capital,” said Smadiyarov, head of the press service.

“Every start is a challenge, first of all, to myself. The Astana Marathon is a great opportunity to feel it to the full extent. This is a major chance to enjoy the unique views of our capital in the early morning hours,” noted Sarmantay, division head, multilateral co-operation department.

“If you want to change the world, first change yourself. The greatest victory is a victory over yourself. This is a unique chance to check your strength and endurance and a good reason to get everyone involved in mass sports,” said Rustemov, division head, foreign economic policy department.

“This marathon was a good occasion to test your physical and psychological preparedness. Knowing my result of the race will work on its improvement in the next start. I hope that this event will attract the attention of city residents to a healthy lifestyle and take part in the next race. The Astana Marathon should become a sports attraction of Astana,” noted Yensegenov, second secretary of the international information committee.

“Running for me is not just a sport, but a key to self-development and family happiness. Participation in long distance races strengthens the will to win over yourself,” said Utegenov, second secretary, department of America.

“I participated in the marathon for the first time. This is an unforgettable impression. I think the number of runners will increase and more and more people will be involved in the development of mass sport in Kazakhstan,” noted Espanov, second secretary, control and administration department.