Kazakh Constitution has withstood the test of time, says President

By Elya Altynsarina in Nation on 10 September 2018

ASTANA – The Nazarbayev Centre hosted Aug. 28-29 the conference, A Constitution: the Embodiment of the Values of the Rule of Law, Civil Society and the Modern State. The conference was dedicated to Kazakhstan’s Aug. 29 Constitution Day.

The event was organised by the Constitutional Council of Kazakhstan, the Foundation of the First President of the Republic of Kazakhstan, the European Commission for Democracy through Law (Venice Commission), the Organisation for Security and Cooperation Office of Programmes and two local universities.

“The agenda of the conference expands on the exceptional importance of principles and norms in the Constitution (of Kazakhstan) that provided for developing today’s democratic, legal, social and secular statehood,” read the congratulatory address by Kazakh President Nursultan Nazarbayev delivered by State Secretary Gulshara Abdykalikova.

“A unique model of the societal development in Kazakhstan formed throughout the years of independence and recognised by the international community became possible only through strict observance of constitutional provisions on social harmony and stability, economic development, and the common historical destiny of the people of Kazakhstan,” the letter said.

It mentioned that the latest reforms strengthened the role of branches of government.

The 2017 reform introduced a refined system of checks and balances in the separation of powers, completing one of the basic components for democratic governance.

“Indispensability of the rule of law, the supremacy of the Constitution are the milestones in modern development of Kazakhstan and in its endeavours to occupy a rightful place in the world. And I firmly believe that the capacity of today’s Constitution will effectively serve Kazakhstan, for many years to come, to join the top 30 developed nations of the world,” the Kazakh leader noted.

In his opening remarks, Chairman of the Constitutional Council Kairat Mami said that over the years, the Constitution has shown its efficiency as it has ensured peace, consent and the accelerated development of the country. It has also improved the public’s welfare and increased global respect for Kazakhstan. 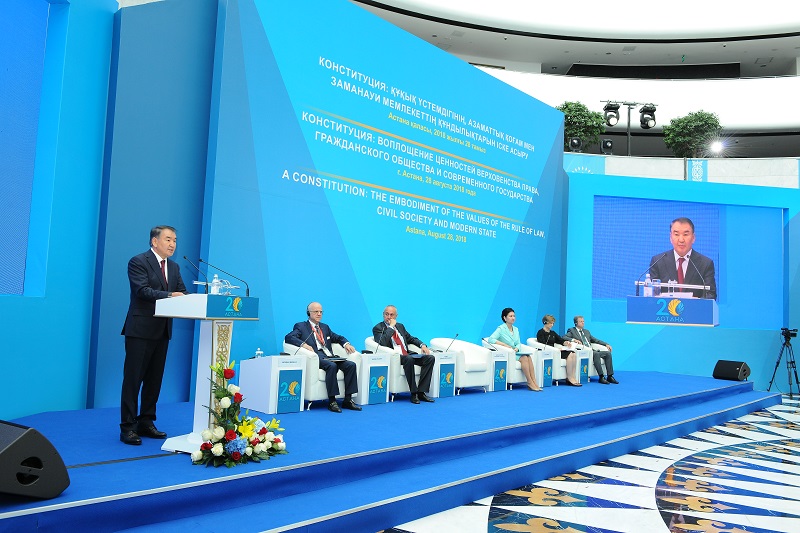 “The Venice Commission welcomes the constitutional reform carried out in Kazakhstan in 2017,” said Secretary General of the World Conference on Constitutional Justice Schnutz Rudolf Dürr, also noting that as Kazakhstan assumed the chairmanship in the bodies of constitutional control of the new democracies of the conference, the annual conference is becoming a forum for exchange of best practices and new ideas.

According to Chairman of the Constitutional Court of Bulgaria Boris Velchev, the basic law of Kazakhstan is based on the original standards of world constitutionalism. “It has stood up to the challenges of the past and successfully adapts to the changing needs of the Kazakh society.”

The impact of the ideas of the people of Kazakhstan about a modern republic, accumulated in 1995 into a constitution, today can be assessed through the behaviours of constituents and emerging traditions in modern Kazakhstan, said Chairwoman of the Constitutional Court of Latvia Ineta Ziemele.

“Peace, harmony and stability in society are a constitutional value,” noted Chairman of the Constitutional Council of Algeria Murad Medelchi, “and the bodies of constitutional justice make a crucial contribution to the preservation of social peace.”

During the conference, Deputy Executive Director of the Foundation of the First President Igor Rogov presented a new commentary on Kazakhstan’s Constitution, jointly composed by the Ministry of Justice and Kazakh and foreign authors under the Ruhani Zhangyru (Modernisation of Kazakhstan’s Identity) Programme.

Organisers then announced award-winning young lawyers in the categories such as Best Young Lawyer for 2018, For Participation in Legislative Work, For Contribution to the Science of Law and Legal Education.

The same categories were applied to another contest among authors of essays. The award-winning essays expanded on the problems of the effectiveness of the Constitution and ways to enhance it, the role of presidency as a guarantor of rights and freedoms in the country and the interaction of the basic law with international treaties, among other topics.

Mami also announced a new contest among media and journalists on the topic, The Constitution of Kazakhstan as the Basis for Successful Modernisation of the State and Society. Participants will be required to cover the issue of observing the supremacy of the constitution and solidifying a constitutional culture. Details of the contest can be found at the council’s website.

Participants also discussed the role of the Constitution in developing civil society institutions and the protection of human rights. The sessions on the second day took place at the Eurasian National University and Maksut Narikbayev KAZGUU University.