Astana Art show calls for a return to creativity and expression

By Aidana Yergaliyeva in Culture on 26 September 2018 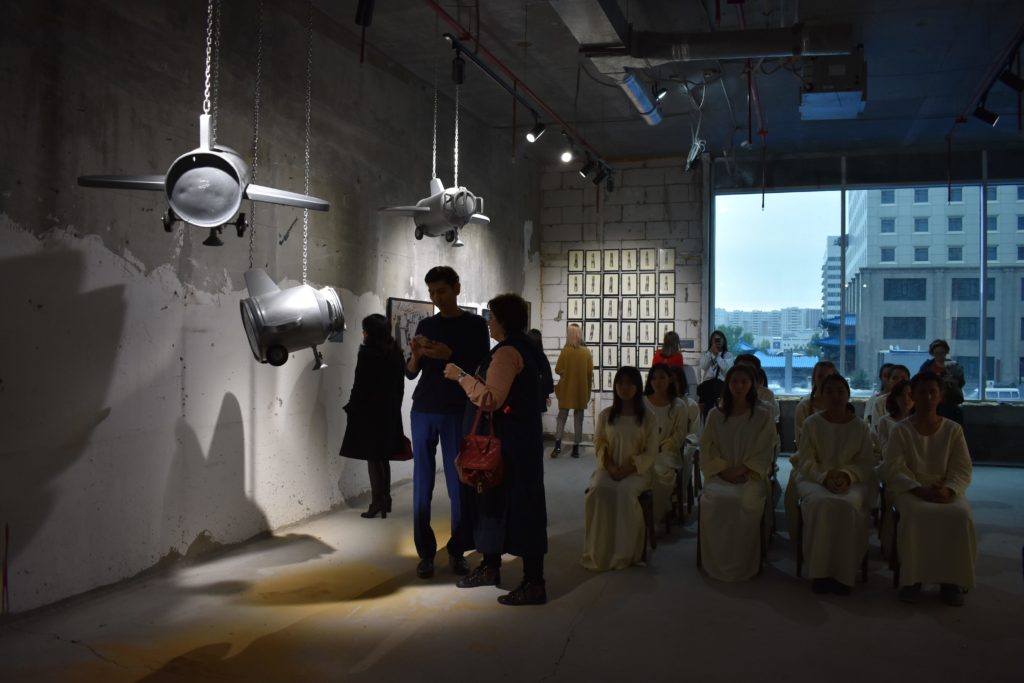 The exhibition, named Reload, is the second part of a three-part series. The first part of the show, Metamorphosis, opened September 15.

“I like this project very much, because it smells with the spirit of freedom and youth,” said art critic Valeriya Ibrayeva.

The Reload exhibit also introduced new exhibit formats. A woman tied to and circling a column and a crowd wearing white cloaks and clapping without a word or smile distinguish Reload from the exhibitions people typically see. While both looked different than pieces at other art exhibitions, they delivered important messages, save those involved. The latter, Karynbai State Farm Syndrome, is the idea of Syrlybek Bekbotayev, who performed with the throng. According to the artist, it is a call for everyone to have his or her opinion and individuality.

“(Before the Soviet Union), Kazakhs were more individualist and could say more things, not with direct text but through music, aitys (a contest centred on improvised oral poetry) and zhyr (folk musical story-telling). But right after the Soviet Union and start of collectivisation, here came the collective thinking. [The ideology was such that wanted] everyone to think and act identically. This way, we started to live with a syndrome. It can be observed in many places today. If you go to the concerts, everyone claps. Some of them might understand why and some of them don’t, but at the time we all will clap as a mass,” he said. 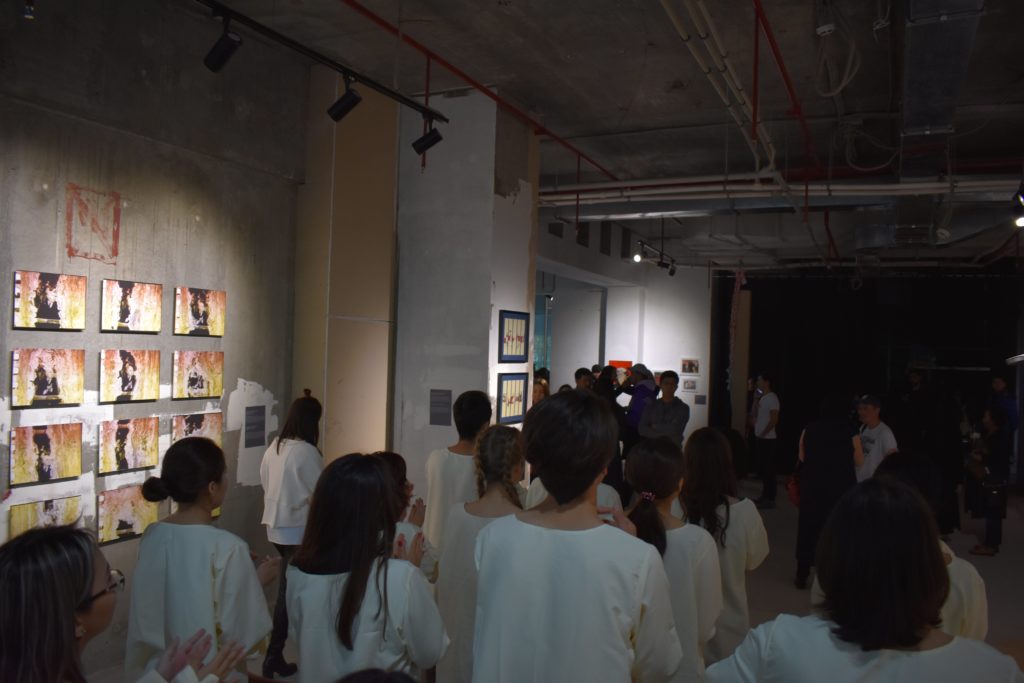 “Breakthrough,” an installation by Mansur Smagambetov, looks like big toy airplanes, but uses metal water bottles as the bodies. The artist speaks of time being stolen from 21st-century children.

“Now, we don’t pay attention that today there are a big number of people who live in the private sector and lack the benefits of civilisation in Kazakh villages, towns and even in Astana. They [children] carry water and spend a lot of time for something that humankind overstepped in the last century. [They already do automated tasks themselves,] instead of developing themselves and going to the theatres and growing intellectually. This is a childish airplane, a toy, but at the same time it is the water flask that they hate from childhood,” he said. 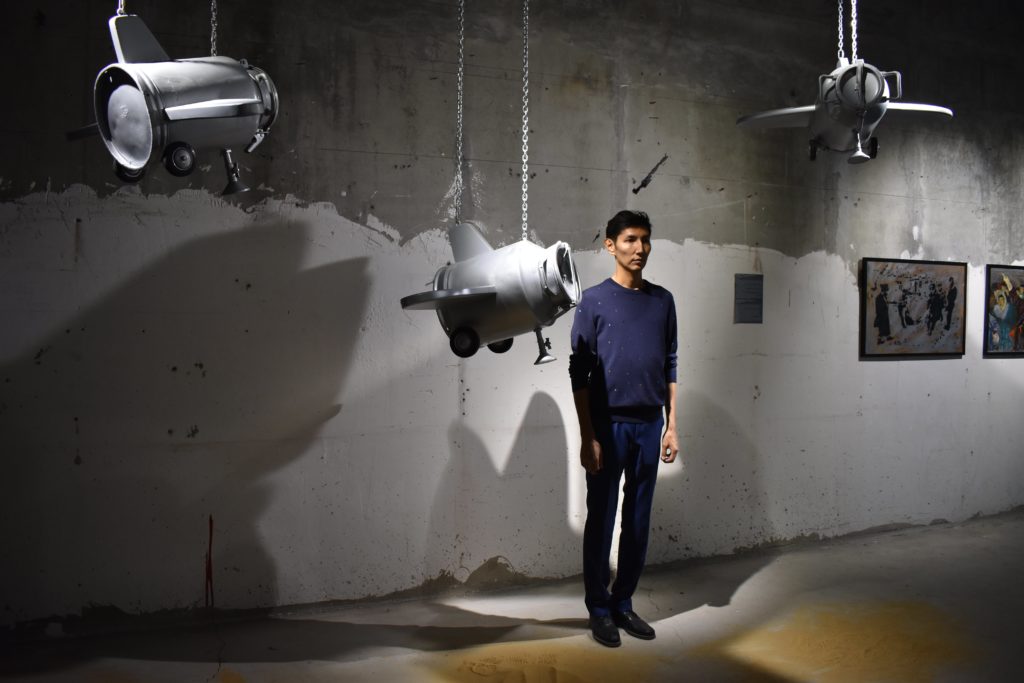 Sonata Raiymkulova, a young artist from Kyrgyzstan, created a black and white graphic work on the wall next to the exhibition entrance. The visual, also named “Reload,” suggests we all need to be released from the big information flow caused by social networks and news clogging our brains with unnecessary information each day, said the author. 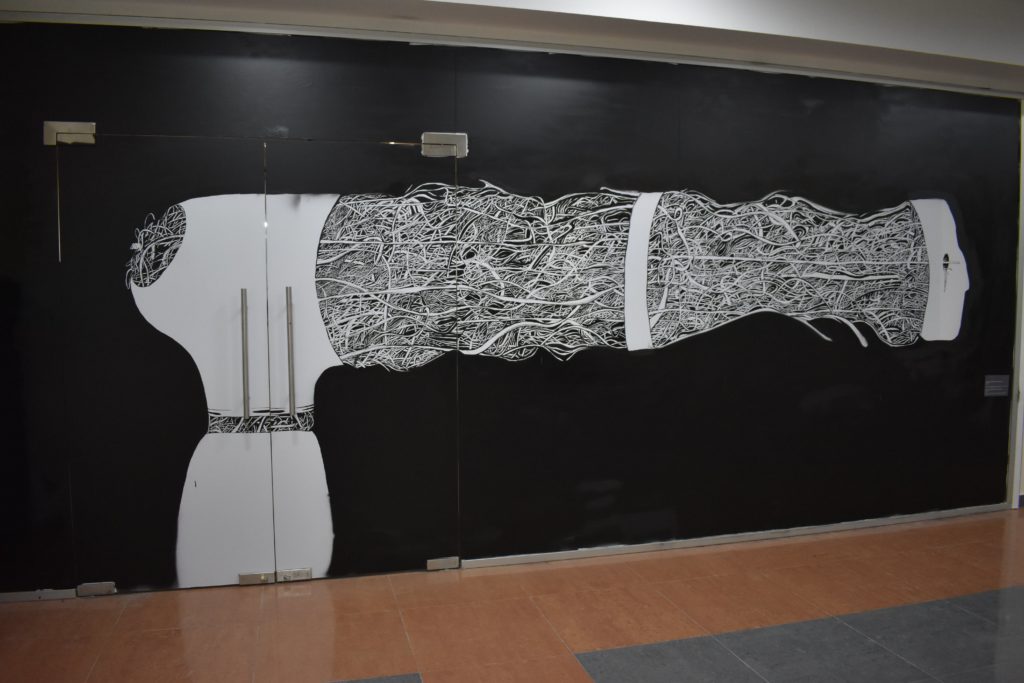 The exhibit, with artwork that makes bold statements and calls for social change, will continue through Oct. 20.