By Dilshat Zhussupova in Astana on 19 September 2018

ASTANA – Astana Marathon 2018 gathered 4,661 runners from 37 cities in Kazakhstan and abroad on a rather cold Sept. 16 morning. 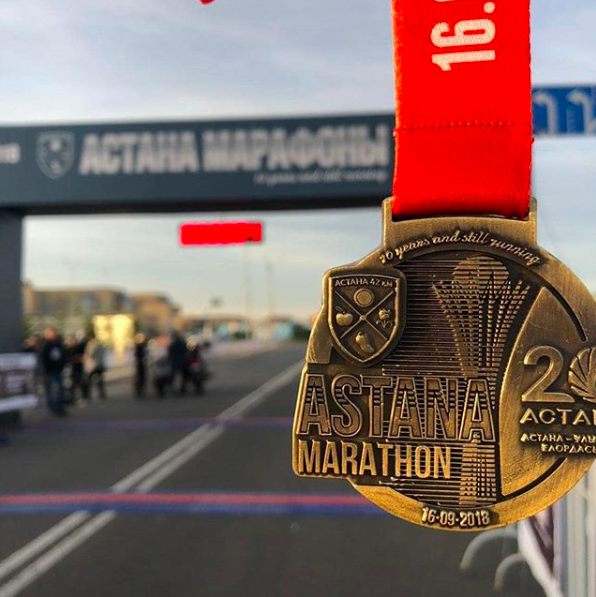 Organised annually since 2009, the run promotes a healthy lifestyle while raising money for charity. This year, the marathon entered the Association of International Marathons and Distance Races (AIMS) and is seeking to obtain the International Association of Athletics Federations (IAAF) road race bronze label to confirm its high organisational standards.

With its flat terrain, the city is a favourable marathon destination. Participants gathered at the EXPO 2017 campus at 6 a.m. to warm up and stretch. The route, certified by IAAF, took runners past the Palace of Peace and Harmony, Khazret Sultan Mosque, Baiterek Monument, Nazarbayev University and Astana Arena.

Runners hailed from Australia, France, Georgia, Italy, Japan, Kazakhstan, Kenya, Kyrgyzstan, Luxembourg, Russia, Spain, Sweden, Turkey, the United Arab Emirates, the United Kingdom and Uzbekistan. People of all abilities participated individually and in pairs, families and companies, with the opportunity to compete in the 10-kilometre and 42.2-kilometre distances if they were above ages 16 and 18, respectively.

The finish line was ultimately crossed by 3,567 participants, 2,895 running the shorter distance and the balance completing the full marathon. There, they received jubilee medals for the capital’s 20th anniversary. Participants may access their results at www.athlinks.com.

This year, the European Union (EU) delegation to Kazakhstan partnered with Astana Marathon, launching the #EU4Running campaign to celebrate 25 years of diplomatic relations. The delegation provided participants with 100 free places and runner’s kits with EU-branded items, many of whom were delegation members, project and partner staff, representatives of international organisations and EU member states’ embassies and capital residents and guests.

In addition to raising funds for various charities, Astana Marathon is determined to foster a love for running among the people in rural areas. The funds raised for the One Steppe Beyond project will help to organise short distance races across the country. Donations may be made at www.astana42k.com/charity.