ASTANA – Ulan Bigozhin, an Indiana University PhD graduate and Nazarbayev University post-doctoral scholar, is a cultural anthropologist examining the reinstitution of kokpar in contemporary Kazakhstan and its increasing popularity in Central Asia. 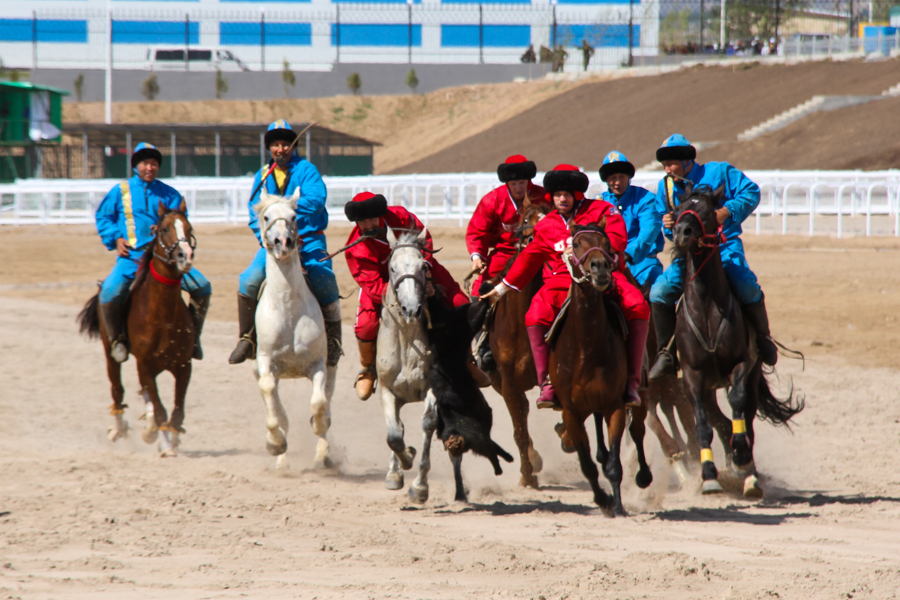 Bigozhin conducted ethnographic fieldwork from May to August across Kazakhstan. In an interview with The Astana Times, he spoke about how the game has been transformed and reimagined as a modern type of sport in conjunction with the country’s more global profile.

Kokpar is an ancient equestrian sport in which horse-mounted players attempt to advance a headless goat carcass towards the opposing team’s goal. The national game is known as kokpar in Kazakhstan, buzkashi in Afghanistan, Tajikistan and the U.S., kokboru and ulaq tartysh in Kyrgyzstan and kupkari in Uzbekistan. Agility, strength, accuracy and ability to stay in the saddle define a strong kokparshy (kokpar player) or shabandoz (palvon).

Kazakhstan has at least two types of kokpar, noted Bigozhin.

“First is zhappai kokpar (communal kokpar), where every player plays for himself. There are no teams; thus, up to 200 or 300 players play against each other. Second is team-based kokpar. There is a team usually consisting of 12 people and they play in specially designated areas such as hippodromes and empty circle fields,” he said.

Kazakhstan made its own kokpar rules, distinguished from Kyrgyzstan, that become widespread after EXPO 2017.

“Kazakhstan is making attempts to include a dummy goat, an artificial corpse of a goat, into the official kokpar for two reasons. First, to make the game animal friendly and adhere to Greenpeace, because there are many foreign teams coming and playing kokpar in Kazakhstan. The second reason relates to financial issues. Kokpar teams regularly train and play; thus, they cannot slaughter a goat for every training if they train every weekend or six-seven times per summer,” said Bigozhin.

Horses are also quite expensive. A basic kokpar horse, a good stallion that has never played the game but shows potential, starts at 700,000 tenge (US$1,946). The price range increases from game to game, reaching approximately 1.5-2 million tenge (US$4,171-5,562) for horses that have demonstrated good stamina, good behaviour and speed in previous games.

“I saw horse owners who sold their stallions for US$20,000 and more. But, there are also some kokpar horse owners that will never sell their horses. I went to Saryagash (a city in Turkistan region) for an interview with one kokpar horse owner who thought I was one of these horse buyers. He repeatedly shouted that the horse is not for sale. It took me a couple of minutes to explain that actually I am not a horse buyer,” he said.

“This is part of their mentality and tradition. They can show the horse and allow you to take a photo, but will never sell,” he added.

Separate from entertainment and sport, the game is becoming a growing social phenomenon.

“As any cultural tradition, kokpar game is highly reconstructed and reimagined. As an anthropologist, I would say that there is a lot of re-imagination,” said Bigozhin.

“Since 2016, after the start of the Ruhani Zhangyru (Modernisation of Kazakhstan’s Identity) programme and the mass spreading by the Kazakh National Sports Federation, young people in many rural areas pursue the career of kokparshy,” he added. 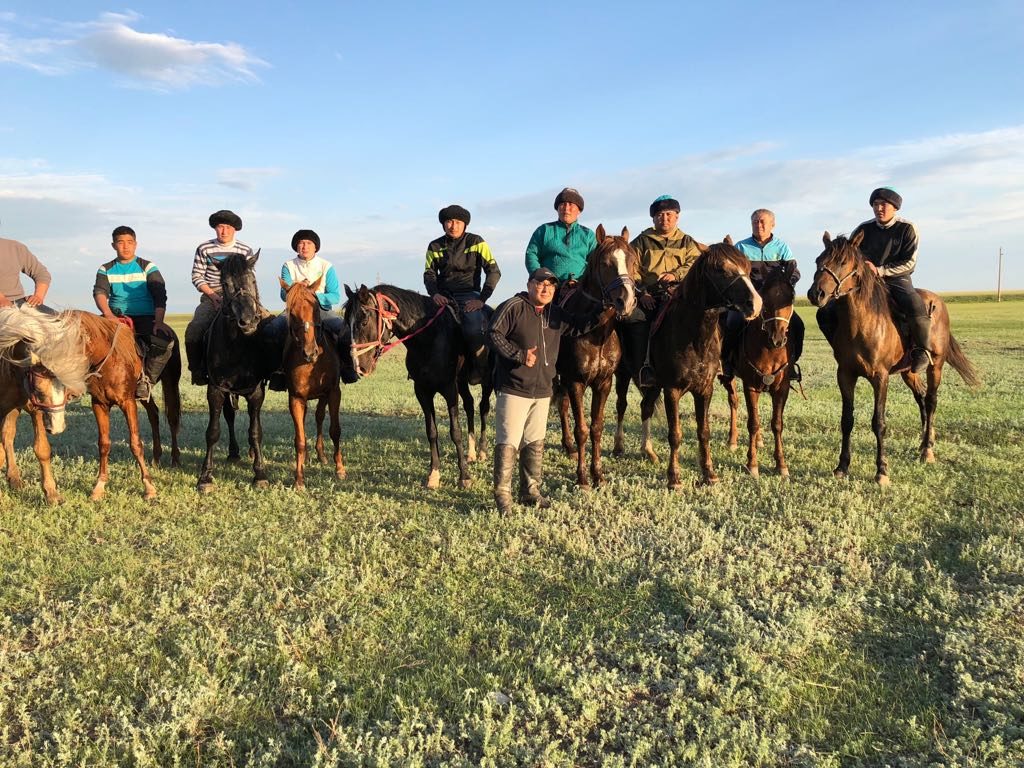 Personal interest, desire and enthusiasm push players, as financial success is not the main driver.

“I met one guy from Koschy (a village near Astana) who never had horses. He decided, though, to buy two horses and expressed his desire to develop kokpar game in Koschy. He said other villages near Astana such as Ilinka and Talapker play kokpar; thus, there is a need to develop kokpar in Koschy as well,” he said.

Some kokpar enthusiasts seek popularity and respect in their communities through their horses.

“There are other kokpar enthusiasts who will never play, but will buy a horse, keep it and find a shabandoz (equestrian) who will play on his horse for every game and make his name famous. It is like building one’s own symbolic capital, fame and popularity as a person who respects tradition,” noted Bigozhin.

Kokpar is becoming international, as it is widespread in Afghanistan, Kazakhstan, Kyrgyzstan, Mongolia, Turkey, Russia and Uzbekistan. Teams from many countries have travelled to Kazakhstan, which has hosted the Uly Dala Oindary (Great Steppe Games) and Expo games. Kyrgyzstan is the site of the World Nomad Games.

“Interestingly, in the kokpar final you are most likely to see two teams, Kyrgyz and Kazakh. There is a lot of connection, friendship and socialising between Kyrgyz kokboru and Kazakh kokpar that goes along with the rivalry,” he said.

Student teams with their own rules are also appearing in Almaty.

“Some say there is less interest for kokpar among the young; however, at the same time you can see a lot of youth aged 16-17 who are playing and having their social media pages with their own fans and publicity. They are treated similarly to soccer players with their own champions, stars, winners and losers,” he added.

Bigozhin noted the two strongest teams, Aulie Ata from Taraz and Kulager from South Kazakhstan, are the ones that usually compete in the final.

The horse plays a major, central role in kokpar, followed by the role of the human.

“Without a well-trained stallion, a person will not win kokpar. You can be a great player, but if you do not have a well-prepared horse, you are more likely to lose,” he said.

The mounts are prepared according to a certain schedule.

“In summer, horses are fattened in South Kazakhstan; then, the cooling process is gradually introduced in which the number of calories given to the horse is decreased and cardio trainings improved,” said Bigozhin.

“When it is getting fresher, there are village trainings conducted on Sundays, where teams play six players against six and ride horses. This is similar to other professional sportsmen’s trainings such as jogging,” he added.

Horses are played on the defence line and as attackers depending on their physical structure.

“Horses are also getting trained to push the opponent and to stop near the opponent. A horse can be in imperfect physical shape, but it cannot be mentally damaged. Kokpar is like horse rugby; clashing together at full speed is not an exception, involving injuries and traumas,” said Bigozhin.

Kokpar is a very tough game, as players need to be born in a village, have more physical trainings in open fields or work with animals.

“Thus, the best kokpar players are usually those who work with animals, horses. In Kazakh, they are named ‘zhylkyshylar’ or ‘malshylar’ (shepherds),” he added.