By Dilshat Zhussupova in International on 30 August 2018

ASTANA – Astana’s new monument, the Peace Wall, was presented by President Nursultan Nazarbayev on the International Day against Nuclear Tests at the Aug. 29 opening ceremony. 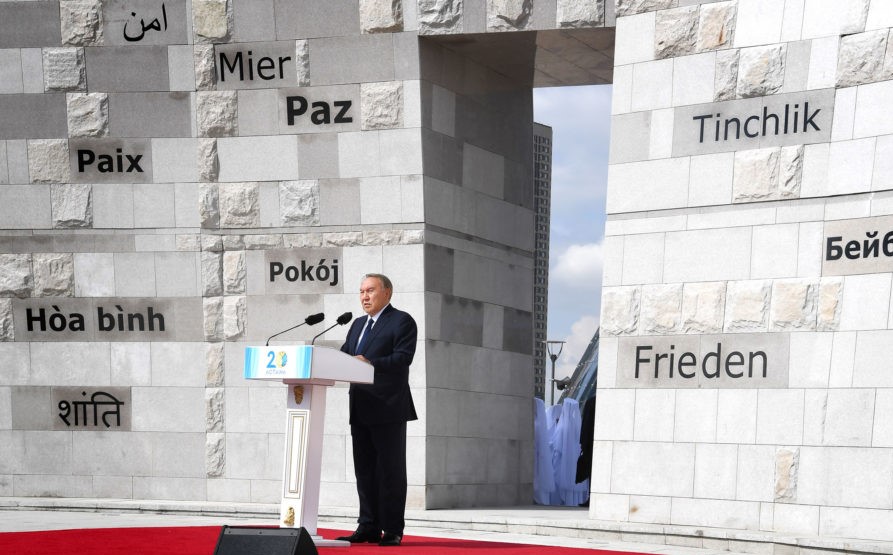 Situated between Independence Palace and the Kazakh National University of Arts and dedicated to the President’s anti-nuclear manifesto “The World. The 21st Century,” the monument is a gift from the Aktobe Akimat (administration) for the capital’s 20th anniversary.

The Soviet nuclear weapons programme conducted nuclear weapons tests at Semipalatinsk Nuclear Test Site from 1949-1989 and permanently affected the lives of the people of the region. The nuclear test site was closed 27 years ago by the President’s decree.

“By erecting this wall, we inspire the trust of all mankind, and we continue our efforts within the framework of the Conference on Confidence-Building Measures in Asia and the Congress of Leaders of World and Traditional Religions and other forums taking place at our country’s capital,” said the President.

He emphasised there is no greater goal than creating a nuclear weapon-free world.

“Nuclear disarmament is tantamount to the existence of mankind,” he added. “To our youth and future generations, we thus show that we fought and struggled for this end, so that they will forever remember and heed such historical moments and themselves prevent the calamities our ancestors experienced.”

Aktobe region Akim (governor) Berdibek Saparbayev stated that the monument shows what has been and is being carried out by Kazakhstan in the preservation of peace worldwide. Key initiatives include The ATOM Project, an international campaign to end nuclear weapons testing, which was first presented by the President at Astana’s international conference “From a Nuclear Test Ban to a Nuclear Weapon-free World” on Aug. 29, 2012.

The monument’s wall transforms from a barrier into a petal-shaped roof, thereby protecting and unifying different groups of people under a single agenda. This design is symbolic of the traditional Turkic kurultai, a political and military council of ancient chiefs and khans.

The steel and stone monument’s length and height is 111 metres and 17.5 metres respectively, and its maximum width is 18.4 metres. One thousand and two hundred tonnes of granite with an area of over 6,000 square metres were used in its construction consisting of three parts, the first part symbolising disunity and isolation, the second part – hope, freedom and independence and the third – the preservation of peace and interethnic harmony. Fittingly, the word “peace” is written in 51 languages on the monument.

In addition to the monument’s visual aesthetics, its architects paid equal attention to its functionality. The roof’s transparent panels include a built-in, 616 square metre light-emitting diode (LED) system. The 2.5 million LEDs allow for the broadcast of bright digital images, which will be used for events.

The cost of 1.8 billion tenge (US$4.95 million) was provided by companies, such as Eurasian Resources Group (ERG), KazMunayGas, BI Group, Aktobe-Saulet, Assana-Dorstroy and Babek Kurylys.