ASTANA – Kazakhstan and Palestine signed a memorandum on consultations between their foreign ministries as well as a memorandum on trade and economic ties in Astana during the first official visit of Palestinian Minister of Foreign Affairs and Expatriates Dr. Riyad Malki on July 30-31. 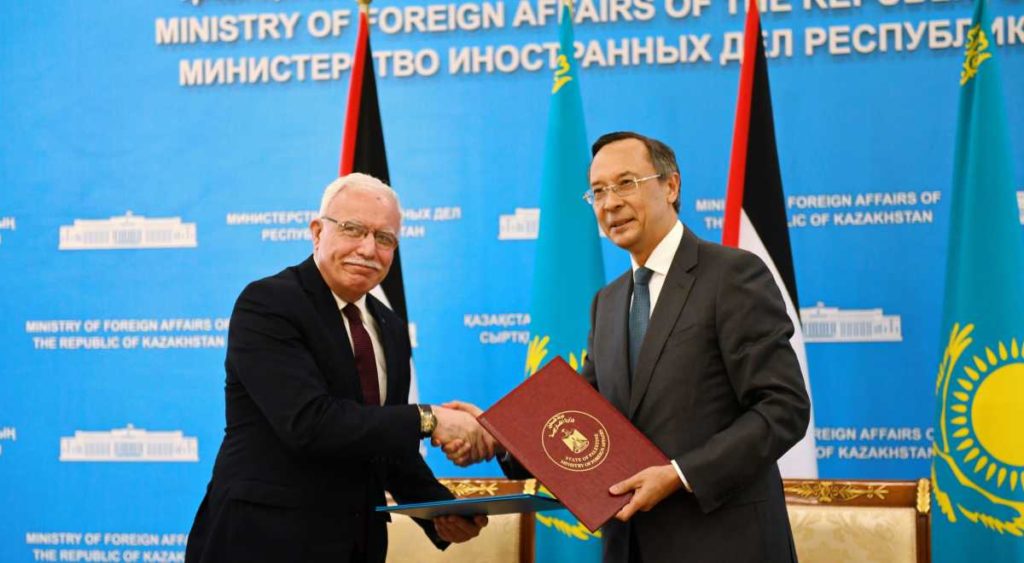 The trade and economic memorandum has been endorsed by Federation of Palestinian Chambers of Commerce, Industry and Agriculture. The Chamber of International Commerce of Kazakhstan hopes the document will expand trade, economic and technical cooperation.

“Kazakhstan attaches great importance to the development of bilateral relations with Palestine. The basis of this cooperation was laid with the visit of the leader of the Palestine Liberation Organisation and President of the Palestinian National Authority Yasser Arafat to our country in 1991 – the year Kazakhstan proclaimed its independence, as well as the return visit of the President of the Republic of Kazakhstan Nursultan Nazarbayev to Palestine in 1995,” Abdrakhmanov said.

This year is the 26th anniversary of the establishment of bilateral diplomatic relations. Kazakhstan and Palestine have since cooperated on bilateral and multilateral levels within the United Nations, Organisation for Islamic Cooperation, the Conference on Interaction and Confidence Building Measures in Asia and the Islamic Organisation for Food Security, among others.

Palestinians have studied in Kazakh universities and Kazakhstan remains committed to fulfilling its annual pledge to the United Nations Relief and Works Agency for Palestine Refugees in the Near East (UNRWA).

Malki thanked his counterpart for supporting Palestine at the regional and international levels and for Kazakhstan’s efforts toward peace in the Middle East.

Palestine has also supported Kazakh initiatives, including those at the UN and the First OIC Summit on Science and Technology in Kazakhstan.

Abdrakhmanov reiterated Kazakhstan’s support for the two-state solution, saying it is necessary for long-term peace in the Middle East.

“The settlement of the Palestinian-Israeli conflict shall be based on the principle of Two States for Two Peoples, which provides for the establishment of the Palestinian State within the borders of 1967 with the capital in East Jerusalem; despite the existing difficulties, and the peace negotiation process must continue,” he said.

He also reaffirmed that Kazakhstan, both currently as a non-permanent member of the UN Security Council and in the future, will continue to support the Middle East peace process as a precondition for peace in the region and that Kazakhstan supports Palestine’s peaceful aspirations.