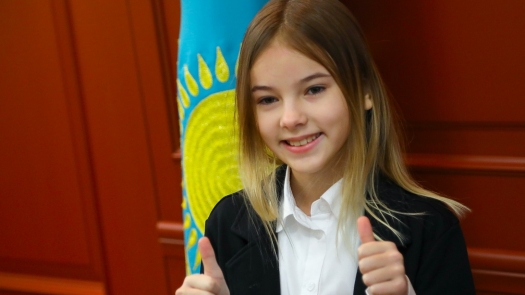 “I understand how serious the competition is and I am extremely concerned. There are a lot of talented young singers in our country, I know many of them and, therefore, I will support whoever makes it to the final stage of the auditions and will have the honour of representing Kazakhstan,” said Tuleshova.

A 12-year-old singer was born in Almaty, she lives and attends school there. Before the age of eight, she only attended collective vocal lessons, however, after winning Ayalagan Astana national contest, she started training individually.

Tuleshova gained popularity after winning The Voice Kids talent show in Ukraine in 2017, the year after she received People’s Favourite national award in Kazakhstan and Bravo music award in Russia.

The video of Daneliya performing “Stone Cold” during the Voice Kids has reached 24 million views on Youtube.

“Fortunately, we have decided on the songs, which will suit the contest and Daneliya’s vocal capabilities. Currently we are preparing an application and getting ready for the auditions despite the tight performance schedule,” said Daneliya’s trainer Nataliya Churakova.

National auditions are held by the Khabar Agency. The application process will run through Aug. 31 and the finalists will be announced Sept. 7. The selected performers will then perform during a Sept. 23 concert broadcasted on Khabar TV Channel, and the winner will be determined by way of an audience vote.

The Youth Eurovision contest will be Nov. 25 in Minsk, Belarus. This year junior vocalists aged 9 to 14 years from 18 countries, such as Albania, Armenia, Australia, Azerbaijan, Belarus, France, Georgia, Ireland, Israel, Italy, Macedonia, Malta, Poland, Portugal, Russia, Serbia and the Netherlands, will compete for the prize. Kazakhstan and Wales will debut this year.

Although Kazakhstan will participate in Junior Eurovision for the first time, Tuleshova was among Kazakh children performing last year at Euroclub, the contest’s out-of-competition programme.