By Malika Orazgaliyeva in Central Asia on 22 August 2018 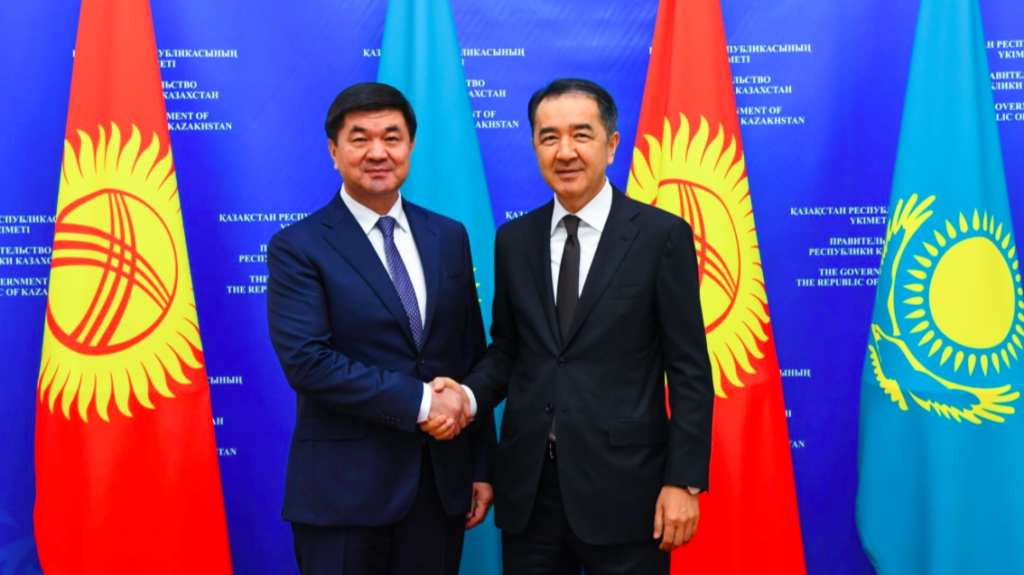 The two government leaders discussed trade and economic cooperation, as well as the expansion of investment projects in water and energy, tourism, transit and transport areas, reported primeminister.kz.

The council participants considered the results of the implementation the previous session’s protocol and took stock of further stages of cooperation in trade, transport, investment, energy, agriculture, tourism and digitisation. In addition, the Comprehensive Programme of Cooperation between Kazakhstan and Kyrgyzstan for 2018-2020 was reviewed.

The council discussed the implementation the Roadmap for Bilateral Economic Cooperation signed last year in Astana on Dec. 2. In 2017, the amount of trade between the two countries increased 13.4 percent, while the results of the first five months of 2018 show an increase of 9.8 percent.

“Today, 824 joint ventures operate in Kazakhstan in wholesale and retail trade, manufacturing, construction, services, as well as professional, scientific and technical activities. In addition, in order to attract foreign investors to priority sectors of the economy, the Kazakh Invest national company together with Deloitte prepared 50 ‘niche projects’ in which the Kyrgyz side can participate. Obviously, the plans to increase mutual trade to $1 billion are quite feasible,” Sagintayev said.

Besides, the meeting participants reviewed military-technical cooperation, development of interaction in the field of transboundary water use, as well as the prospects of development of collaboration on the Kazakh-Kyrgyz state border.

“At the suggestion of the Kyrgyz side, we are ready to sign the protocol on Changing the Status of the Checkpoints Sartobe (Tokmok) and Auhatta (Kenbulun) from bilateral to multilateral. This will increase their throughput. We also understand that implementation of this solution will require additional modernisation of the infrastructure of these checkpoints and access roads to them. Ensuring the high-quality functioning of the border is one of the priority tasks,” Sagintayev noted.

Abylgaziev underlined the importance of collaboration in the spheres of trade, transport, transit and tourism. He also stressed the potential of interaction within the digital transformation of the two countries’ economies in the framework of the EAEU unified digital agenda. Similarly, Abylgaziev touched upon the issues of improving tax administration, identification and marking of goods.

Another significant direction of potential interaction is development of regional tourist routes, the primeminister.kz reported. A vivid example of beneficial cooperation is the tourist routes to the Khan Tengri Peak, running through the territories of the two countries.

At the ceremony of signing documents, Sagintayev and Abylgaziev signed the protocol of the Council’s seventh session, as well as the protocol on amendments to the agreement between Kazakhstan and Kyrgyzstan on border crossing points dated Dec.25, 2003. The Kazakh Ministry of National Economy and the Kyrgyz Ministry of Economy adopted a memorandum of cooperation.

The next eighth session of the Kazakh-Kyrgyz Intergovernmental Council will take place in Bishkek in 2019.