By Elya Altynsarina in International on 9 August 2018

ASTANA – The Ministry of Foreign Affairs awarded the winners of the fifth annual Kazakhstan through the Eyes of Foreign Media contest at an Aug. 6 ceremony. 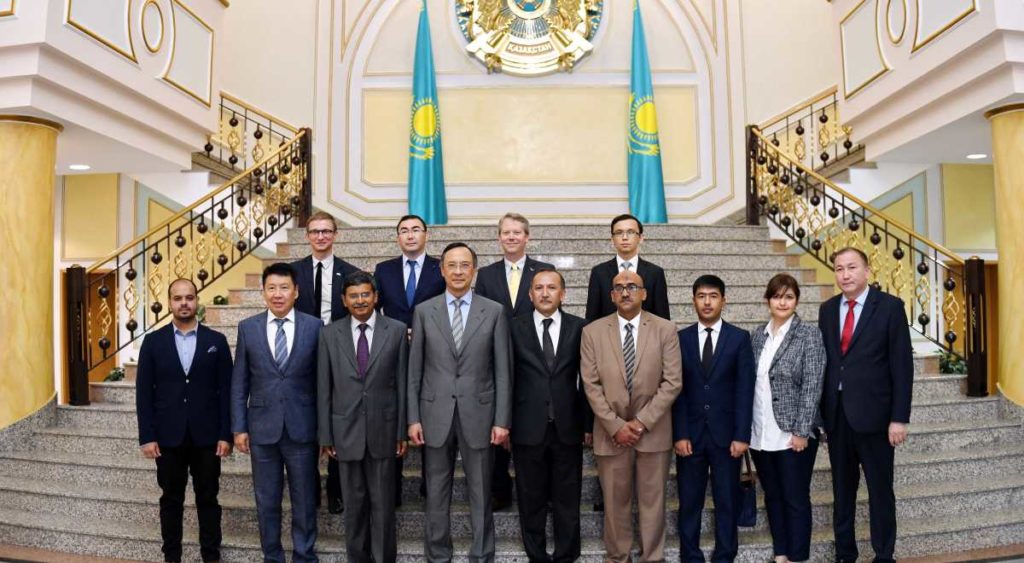 The contest seeks to promote professional reporting on Kazakhstan in the foreign media by recognising the authors of the most objective journalistic reports, stories and analytical pieces. The winners, representing the Americas, Europe, Commonwealth of Independent States (CIS) and the Baltic States. Middle East and Africa and Asia, Australia and Oceania, received a trip to Kazakhstan to visit the capital, Almaty and Burabai resort area.

Welcoming the winners, partners and diplomats representing their countries, Foreign Minister Kairat Abdrakhmanov noted the ministry will continue to support in every way the work of foreign journalists covering events in Kazakhstan.

“The openness of Kazakhstan’s society, the open-mindedness, introducing Kazakh culture to the world – these are the essence of the Modernisation of Kazakhstan’s Identity Programme of President Nursultan Nazarbayev,” he said.

The National Information Agency of Uzbekistan (UzA) editorial team, which in 2017-2018 covered Kazakh-Uzbek relations, was the winner from the CIS and Baltic countries. Its article “Uzbekistan-Kazakhstan: dedication to the 25th anniversary of establishment of diplomatic relations,” as well as publications on the bike tour of friendship and Days of the Almaty Region in Uzbekistan, were specifically noted.

“Recently, the interest of the global community in Central Asia has increased significantly. President Nursultan Nazarbayev and the heads of all the states of the region are making a lot of efforts to enhance regional cooperation. It is not surprising that this year saw a great number of publications dedicated to the rapprochement and cooperation of the states of Central Asia. Last year, the trade turnover between Kazakhstan and all Central Asian countries increased by 18.4 per cent, with Uzbekistan by 32 percent,” noted Abdrakhmanov.

U.S. journalists Stephan Rabimov and Alexander Lipovtsev, authors of the Forbes article “Seven Wonders of Kazakhstan: Why Fashion Tourism Is Booming in Central Asia,” took the prize for the Americas.

The winner from the Middle East and Africa was Jordanian Ayman El-Zaben for a series of materials on Kazakhstan’s non-permanent membership on the UN Security Council, the President’s Five Social Initiatives, launch of the Astana International Financial Centre and the capital’s 20th anniversary.

Approximately 300 publications in foreign media were devoted to the anniversary, most written by journalists who visited the city to learn about its development. One such publication called “Astana: the capital has its own charms and pleasures,” written by Indian Inderveer Singh and published in Business Central Asia, was selected as the winner from Asia, Australia and Oceania.

British journalist Gilly Pickup, with her articles “Destination–Kazakhstan” and “Kazakhstan: One Steppe Beyond” published in Aberdeen Press&Journal and The People’s Friend, was the European winner.

President of the Club of Chief Editors of Kazakhstan Yerlan Bekkhozhin, ambassadors Saidikram Niyazhodzhaev (Uzbekistan) and Prabhat Kumar (India) and diplomats from the American and Jordanian embassies spoke at the ceremony.

In addition to the winners, the ministry awarded special diplomas to dozens of journalists and media who will receive them at the respective Kazakh embassies.