By Malika Orazgaliyeva in International on 6 August 2018 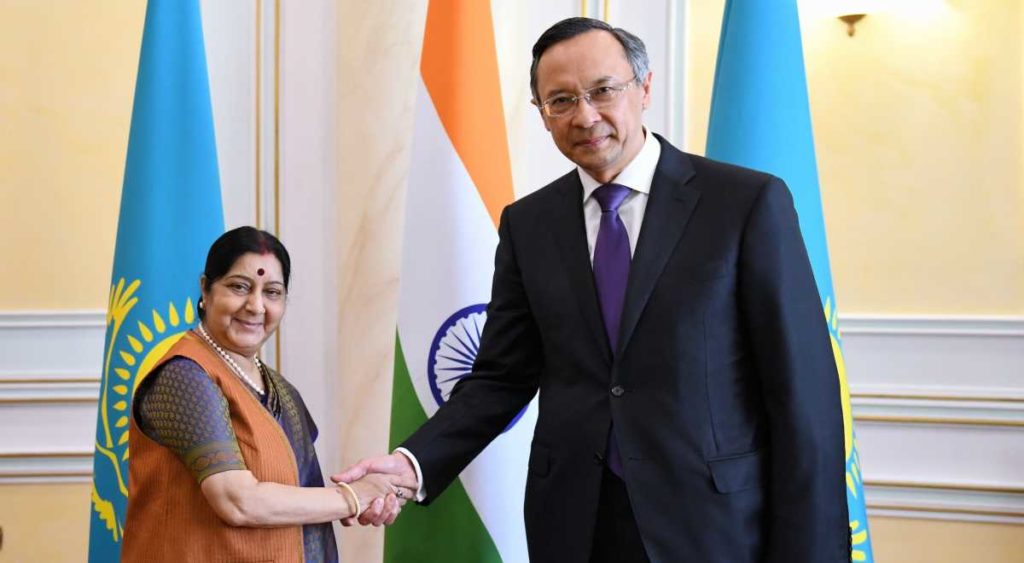 “During today’s fruitful negotiations we agreed on a number of matters concerning the main international and regional issues. I am sure that our meeting gave a good impetus to the strategic partnership between Astana and Delhi. The peoples of Kazakhstan and India are united by the lasting bonds of friendship, cooperation, mutual respect,” Abdrakhmanov said at a joint press conference.

“India’s relations with Kazakhstan are built on a strong foundation of centuries old historical and cultural ties. Both India and Kazakhstan have developed multifaceted cooperation in all areas of bilateral and multilateral relations and are strategic partners since 2009,” Swaraj told the media.

Abdrakhmanov and Swaraj discussed implementation of agreements reached in 2017 during the visit of Indian Prime Minister Narendra Modi to Astana, as well as his meeting with Kazakh President Nursultan Nazarbayev in June 2018 on the SCO Summit sidelines in Qingdao.

“We do not have any political disagreements, and our positions are close on many important international issues. Our cooperation is carried out within the framework of international organisations and multilateral forums,” Abdrakhmanov said.

The two ministers discussed bilateral trade and economic cooperation, which reached almost $1 billion in 2017. As a result, Kazakhstan became one of India’s main trading partners in Central Asia.

“Following the recent meeting of our presidents in Qingdao, President Nazarbayev gave a number of specific instructions to the Kazakh government on strengthening bilateral cooperation in the fields of investment, energy, logistics, information technology, space, pharmaceuticals, tourism and film production. These are the key areas we will focus while preparing official high-level events in 2019,” Abdrakhmanov noted.

“We are going to expand the potential of the Kazakhstan-Turkmenistan-Iran railway with access to the Indian Ocean through the Iranian seaports,” he added.

According to Swaraj, India has emerged as the fastest-growing large economy in the world. It is a global hub for manufacturing and innovation.

“To enhance people-to-people contact and to promote tourism. India has extended the electronic visa system to the nationals of Kazakhstan since February 2018. Thanks to the pro-active leadership of President Nazarbayev. We already notice positive changes facilitating travel by Indians to Kazakhstan,” said Swaraj.

The foreign ministers agreed to deepen bilateral military-technical cooperation. This concerns the assistance in the deployment of the Kazakh peacekeeping contingent as part of the Indian battalion for the UNIFIL mission in Lebanon, and the joint Kazakh-Indian military KAZHIND exercises planned for autumn 2018.

“Our defence and security sector cooperation has intensified in the last two years,” Swaraj noted.

The ministers also identified steps to increase interaction within international organisations, such as the Shanghai Cooperation Organisation (SCO), the Conference on Interaction and Confidence Building Measures in Asia (CICA) and the United Nations.

The parties agreed that India’s accession to the SCO would boost the political and economic potential of the organisation, including its ability to stabilise the situation in Central and South Asia, as well as assist in the resolution of the crisis in Afghanistan.

The ministers also focused on cultural and humanitarian ties.

“We thank Indian friends for their support in the restoration and holding a solemn opening of the grave of the famous son of the Kazakhstan steppes, the outstanding historian and statesman Muhammad Haydar Dulati, in the city of Srinagar,” noted Abdrakhmanov, adding Kazakhstan will continued to seek deeper relations with India.

“Kazakhstan firmly intends to continue its course towards the development of friendly relations and partnership with India, and to make efforts for joint and harmonious development for the benefit of the peoples of both countries,” he said.

The meeting raised the issues of participation of leading Indian financial and investment companies in the work of the Astana International Financial Center (AIFC).

Trade turnover between Kazakhstan and India between January and April totaled $250.3 million, which is 31.2 percent higher than for the same period in 2017.

Imports to Kazakhstan from India between January and April increased by 19.8 percent and amounted to $76.1 million. These are mainly industrial furnaces, equipment for sorting and grinding soil, refractory ceramic products, machines and mechanisms for soil works, sulfur-organic compounds and other goods.