By Abira Kuandyk in International on 8 August 2018

ASTANA – The main priority of the Afghan diplomatic mission in Kazakhstan is to strengthen economic, political and cultural ties between the people and governments of the countries, said Afghan Ambassador to Kazakhstan Kadam Shah Shahim in an interview with The Astana Times. 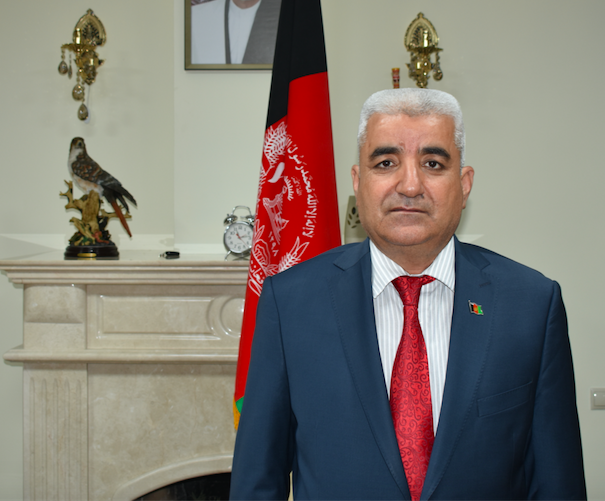 Relations and cooperation have expanded and will continue to improve, he noted.

“Last year, the President of the Islamic Republic of Afghanistan Mohammad Ashraf Ghani travelled to Astana to attend the first OIC (Organisation of Islamic Cooperation) Summit on Science and Technology. Afghan Chief Executive Abdullah Abdullah also visited the capital to discuss further prospects of trade and economic cooperation. It symbolises existing valuable relations between the countries,” he said.

Trade, security, and education are among the priority areas of cooperation between Afghanistan and Kazakhstan.

“Trade relations between the two countries are very promising. However, we seek to set the balance between import and export turnover. Afghanistan exports much less than it imports,” said Shahim.

Kazakhstan’s educational assistance has been significant.

“Fifty million dollars was allocated for 1,000 Afghan students to study in Kazakhstan. The country also provided 30 scholarships for Afghan students last year – 16 for bachelor, 12 for masters and two for doctoral degree programmes,” he added.

Since January 2017, Kazakhstan has joined Japan and the United Nations Development Programme (UNDP) to offer seminars and training for various staff workers in education, health and women’s affairs.

“This year, for instance, Kazakhstan with the UNDP conducted a two-week workshop in maternal and child healthcare for public health professionals from Afghanistan held at Nazarbayev University,” he said.

“Afghan women working in the health sectors, nurses and doctors, went to their villages to help Afghan people after attending the seminar. It was virtuous, as most of participants were women; they were not from cities, but from Afghan villages,” he added.

“[It] assisted in promoting stability in the region. This year in January, 15 members of the UN Security Council went to Kabul to overview the security situation in Afghanistan, including a delegation from Kazakhstan,” he noted.

Augmenting bilateral cooperation between Kazakhstan and Afghanistan is an impetus to maintaining peace and security.

“The fundamentalists’ movements within neighbouring countries, within Central Asia and Chechnya, seek to reach Kazakhstan and Central Asia through Afghanistan and imperil security in the country. Afghanistan resists against these movements and it improves Kazakh-Afghan relations,” he said.

“There is an Afghan-Kazakh company that is working to bring Afghan tourists to Kazakhstan. However, the main problem is connected to visa issues. We approached the Kazakh government and the Kazakh embassy in Kabul to work out this issue,” he noted.

Afghans see Kazakhstan as a more preferable healthcare partner due to the relatively affordable services and geographical proximity. Two-hour flights connect Almaty and Kabul and a once-a-week, Kabul-Almaty-Kabul charter flight resumed in January 2017.

“We have three trade ports between Afghanistan and Central Asia. One is Aqina port in Turkmenistan, the second is Hairatan in Uzbekistan and the last is Shirkhan Bandar in Tajikistan,” he said.