By Malika Orazgaliyeva in International on 30 August 2018

August 29 is the date in 1991 when Kazakh President Nursultan Nazarbayev shut down the Semipalatinsk nuclear test site. The Soviet Union conducted more than 450 nuclear weapons tests at the site over more than 40 years. At the initiative of Nazarbayev, the UN declared August 29 the International Day against Nuclear Tests.

Kazakhstan hosts events each year on Aug. 29 to commemorate the date.

“The conference that brings us here today is unique. As highlighted by President Nazarbayev, the effects of nuclear weapons and nuclear testing cannot be contained in either time or space. They are a global issue which requires global and intergenerational cooperation,” CTBTO Executive Secretary Lassina Zerbo told the gathering.

“Today, equally thanks to Kazakhstan, August 29 marks the International Day against Nuclear Tests. But let me assure you. CTBTO works hard to make sure that every day is a day against nuclear tests,” said Zerbo.

Conference participants are discussing the 2019 Preparatory Committee for the 2020 Review Conference of the Non-proliferation Treaty, ways to cooperate to bring the CTBT into force and the CTBT’s contribution to Sustainable Development Goals. They will also examine Kazakh efforts to permanently end nuclear weapons testing and the work of the National Nuclear Centre of Kazakhstan in Kurchatov.

On the first day of the conference, participants also discussed international security and the Korean Peninsula.

“I returned from the region last week with an even stronger conviction that the international community should make full use of the CTBT and its verification regime in the process of denuclearisation of the Peninsula,” Zerbo said.

Zerbo and Kazakh Minister of Foreign Affairs Kairat Abdrakhmanov also adopted a joint statement on the first day of the conference inviting all nations to take part in commemorating the International Day against Nuclear Tests and to take additional steps to bring the CTBT into force.

“We urge those states that have not yet signed or ratified the treaty to do so without delay. We especially call on the remaining eight CTBT Annex 2 states, whose ratifications are needed for the treaty’s entry into force, to demonstrate leadership by taking this important step. … It is high time to bring the Comprehensive Nuclear Test-Ban Treaty into force. We owe it to ourselves, and to future generations,” the joint statement said.

Other activities over the five-day conference will include a visit to the Semipalatinsk Nuclear Test Site and the museum in Kurchatov, the erstwhile secret administrative and scientific centre of the test site. These visits will offer information about the devastation to people and the environment caused by nuclear weapons tests. 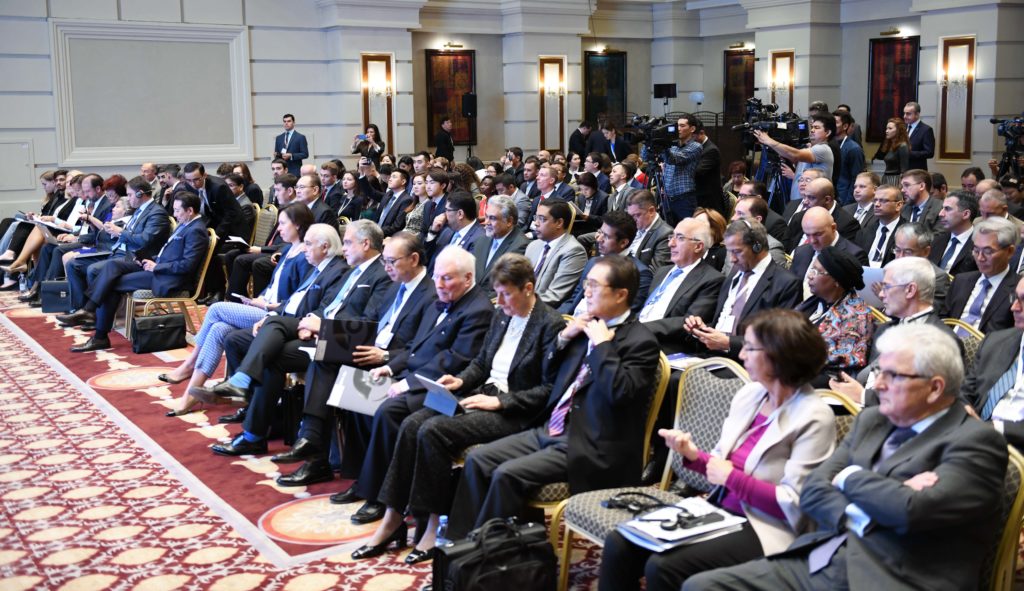 “I wish to begin today’s event by paying tribute to all the men, women and children who suffered or lost their lives as the result of nuclear testing,” Abdrakhmanov told the gathering, while asking the participants to observe a minute of silence to pray for the victims of nuclear testing.

“Global security and a safe future for coming generations can only be guaranteed when the world is completely free from nuclear weapons. Kazakhstan strongly believes that national security of states can be maintained through cooperation and mutual trust,” he continued.

Kazakhstan has been at the forefront of global non-proliferation efforts since renouncing what was then the fourth largest nuclear arsenal in the world inherited following the collapse of the Soviet Union.

Today, the country continues to promote a non-proliferation agenda as a nonpermanent member of the UN Security Council and its global initiative The ATOM Project.

Abdrakhmanov urge the conference participants to sign The ATOM Project petition calling for the permanent end to nuclear weapons testing. More than 300,000 people around the world have signed the petition. The ATOM Project has also organised minutes of silence throughout the world on Aug. 29 at 11.05 am local time to commemorate the victims of all 2,000 nuclear tests conducted globally.

To commemorate the Aug. 29 date in 2017, Kazakhstan hosted a Pugwash conference combined with the launch of an International Atomic Energy Agency (IAEA) low enriched uranium bank.

The UN General Assembly is expected to revisit the nuclear weapons issue Sept. 6 when it will have an official session dedicated to the International Day against Nuclear Tests.