Yedil Khussainov on Nomad Way, mission of his music and stumbling blocks for Kazakh music industry

By Aidana Yergaliyeva in Culture on 2 July 2018

ASTANA – Musician and composer Yedil Khussainov talked about his music, his thoughts on the Nomad Way festival and the problems facing the Kazakh music industry, such as why high-quality music cannot find its way to the average listener, in an exclusive interview with The Astana Times. 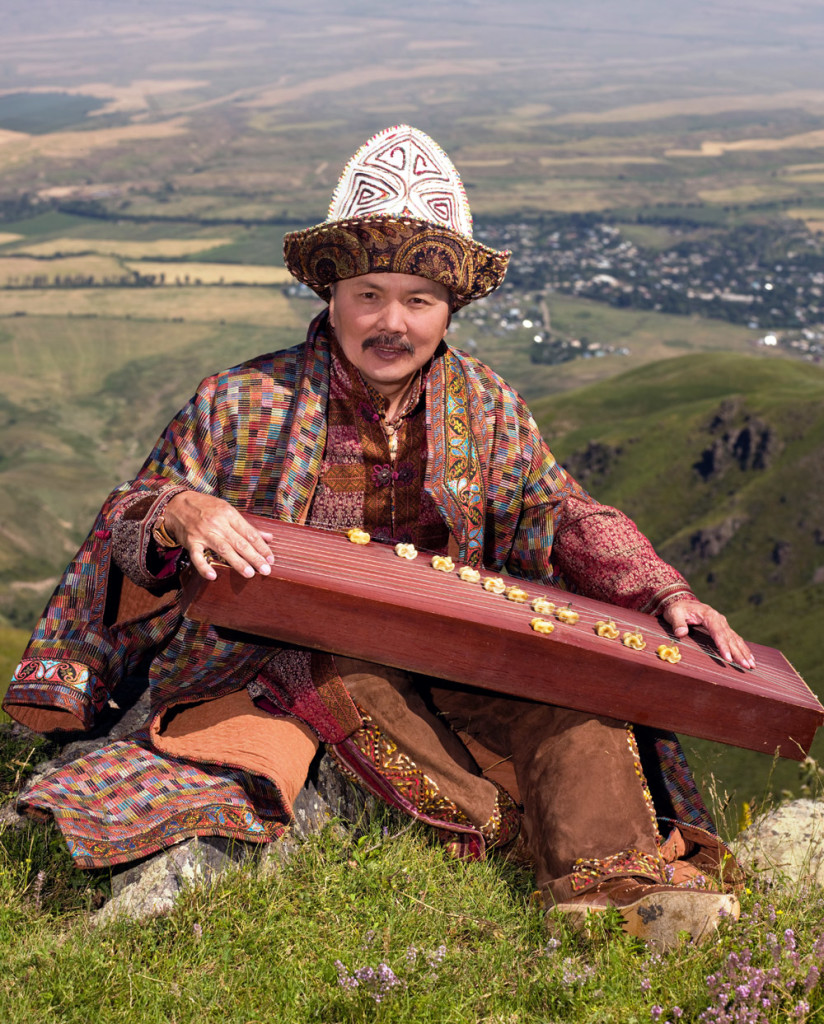 An ethno-musician and soloist who plays more than 10 instruments, Khussainov can substitute for an entire orchestra. In addition to traditional classic instruments, he plays ancient Kazakh ones such as zhetygen (seven-stringed zither), saz-syrnai (an egg-shaped clay wind instrument), shan-kobyz (mouth harp), sybyzgy (side-blown flute) and daulpaz (small kettledrum). He has also mastered a rare type of guttural singing that fascinates the listener with its mystic and shamanistic vibes.

Khussainov has performed at many international festivals in Asia, Europe and the United States, the stages of Carnegie Hall in New York, the Kennedy Centre in Washington and the UNESCO Hall (United Nations Educational, Scientific and Cultural Organisation) in Paris. He has won numerous state awards and composed many soundtracks, including those for the movies “Kelin” and “Quraq Korpe.”

Music has occupied his entire life. His parents, Seilkhan Khussainov and Raushan Nurpeisova, are famous musicians. When he was young, they founded the Dina Nurpeisova Orchestra in Atyrau, where Khussainov received his first musical education. He continued to grow professionally at the Tchaikovsky School of Music and Almaty Conservatory, later becoming one of the first members of the Otyrar Sazy Orchestra.

Khussainov can’t be framed within a specific genre. His music merges the seemingly-separate worlds of contemporary and ethnic music, allowing them to complete each other in one beautiful and vibrant melody. He creates content that is part folklore, ethno-symphonic and ethno-jazz-rock. He started to feel comfortable by experimenting and now has vast knowledge and practice in all areas.

Khussainov’s life experiences have shaped his musical vision and helped him create unique sounds that captivate the listener from the very first notes. His early education in folk music eventually expanded to classical music, yet he has always made room in his repertoire. Since childhood, he has admired and listened to The Beatles.

“They are a classical canon of contemporary music for me,” he said.

Music with a special mission

Khussainov believes his music is not just a mere mix of sounds, but has a higher purpose. His notes earn trust and sympathy. Kazakh ambassadors have told him that just in a minute and a-half, his music can show the audience the real Kazakhstan. While the diplomats work for years producing papers and conducting meetings, they can’t achieve the same result as his music manages to do in such a short time.

He believes Kazakh music is the same ambassador to the world, performing an equally important mission.

“Foreign stages attract thousands of guests to their stages. I want to show them our music as part of our tradition,” he said.

Khussainov intends not only to promote Kazakh culture abroad, but also wants to show his compatriots that music can be different and folk songs are not dull.

“You know jazz is based in America, but Kazakh jazz equally has the right to exist,” he said.

Astana hosted Nomad Way 2018, an international festival of nomadic culture held June 22-24 in the amphitheatre on the banks of the Yessil River. Khussainov performed for the second time with his group Yedil & Satzhan. 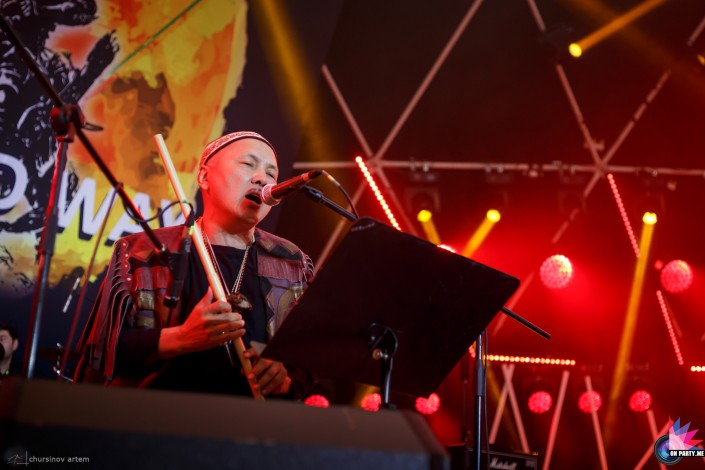 “[They are] spiritual people and my students. To be honest, I also sometimes learn from them, because young people know contemporary music better. We found our special connection and [we] complement each other’s work,” he said about the band.

“Nomad Way, its stage in the centre of the city… personally, I like the festival very much. [Sadly,] we only performed on the third day as we had already planned performances in Almaty.

“Festivals like this give an opportunity for personal growth. You can always find something to learn from,” he added.

The audience included young musicians with expertise in organising performances and members of the Nazarbayev University Orchestra who shared their opinions about the fest.

“In fact, it was awesome! People were dancing! These are the folk songs that people usually never listen to, but this one was in jazz-like and rock-like styles. The music rocked for real! Lightning was in the rhythm of the composition. The sound was well-tuned. The atmosphere was incredible and relaxing. The seats were unlike those in usual theatres; there was lots of space and it created this connection with the audience. People stood and danced. In general, I’d say what they have done was incredibly awesome,” said drummer Laila Duisenova.

“It was great! The whole concert is very cool! Lights, sound, the work of the operators who displayed the picture on the screen!” added violinist Alibek Abilev. 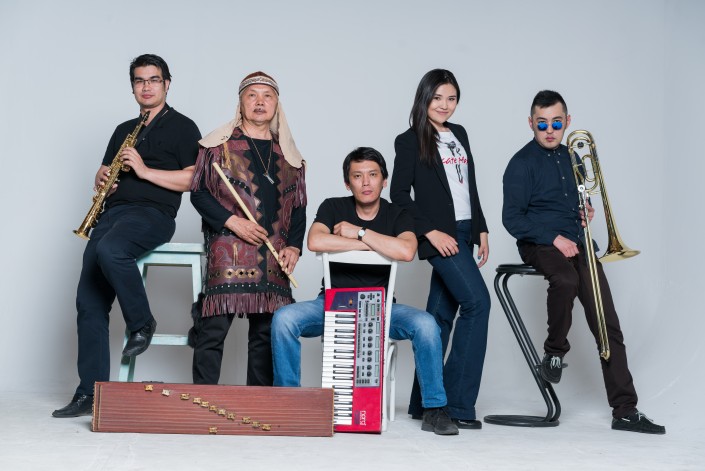 Khussainov is concerned about the Kazakh music industry and spoke about the stumbling blocks that are preventing its growth.

The main problem, he noted, is that many Kazakhs don’t listen to classical music, including contemporary classics like jazz and rock. They are consumed by, as he honestly and harshly put it, “primitive pop music,” resulting in the difficulty for professional artists to be noticed among “rubbish” pseudo-artists.

After working in the foreign music industry, Khussainov has found it is much harder for professionals to be in demand in Kazakhstan. Perhaps that explains why shining stars like Dimash Kudaibergen and Daneliya Tuleshova were recognised only after their success on foreign programmes.

“We know the level of music we make. In Kazakhstan, we are on the top level, yet the top financially supported people are not musicians. [They are the] people who sing with auto-tune and it doesn’t represent any value in music,” he said.

People who listen to his band for the first time always wonder “why don’t we know them?” Khussainov cited the highly unfavourable conditions that don’t allow them to be promoted in Kazakhstan.

“We went to the TV and they said ‘no’ to us. We asked to perform and offered a content of high quality and they asked money for it. [It is ridiculous because, in fact,] they have to give us money for the concert that we give. But you know how the system works: if you don’t have money, then ‘no,’” he added.

Khussainov noted the time, resources and local support are needed to produce and continue developing a high-quality product. Therefore, he wants Kazakhstan to encourage real artists and young professionals.

“The more attention there is from the government or financial structures that could help your creative plans, [the more talents will be noticed]. For example, for a disc release or music video remake, there are expenditures where it will be great to have sponsors,” he said.

“I want everyone to understand that it is very dangerous to work with a low-quality product. Our children can be guided in the wrong spiritual way which can cause the degradation of our people and our culture,” he added.