The festival is a continuation of a pilot project run by the city’s Saryarka district Akimat (administration) last year, said Olga Veselova, deputy director of the Eurasian Cultural Alliance, the event organiser, in an interview with The Astana Times. 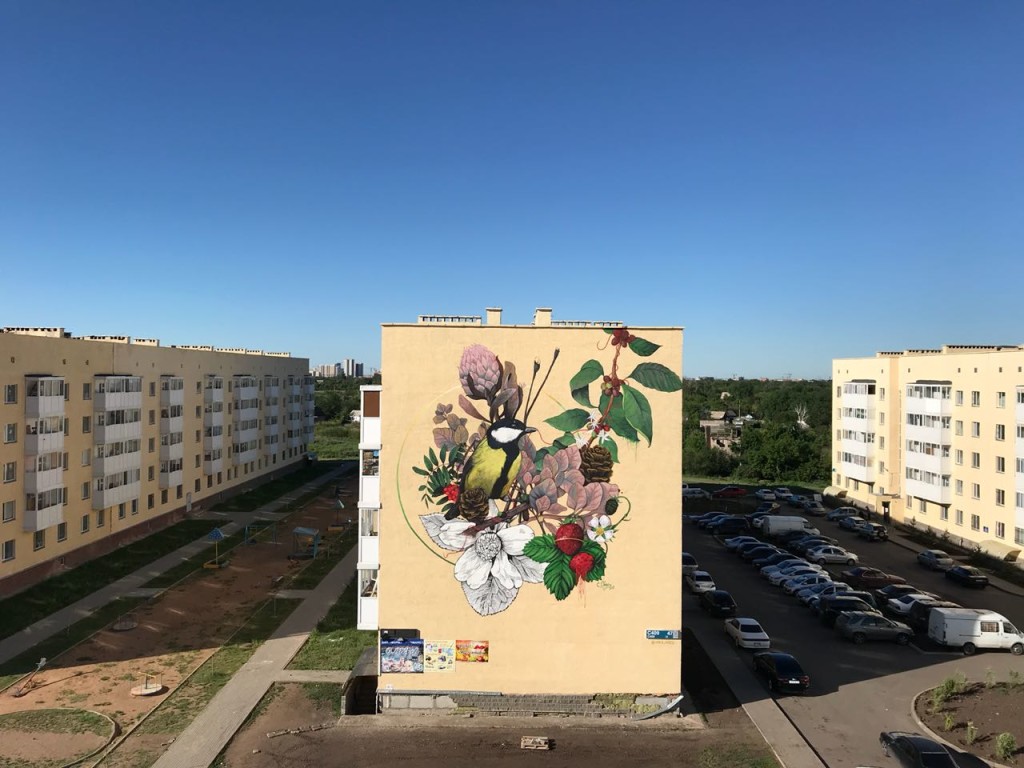 The goal is to popularise contemporary street art and connect people to art, as well as promote young and talented street artists.

“This was not our initiative. We were approached by the Saryarka district akimat to bring art to urban space. Last year we decided to try, because Astana had not had murals before,” she said.

The first mural appeared in June 2017 on a four-storey house at 1 Beitbishilik Street near the Yessil River embankment. DOXA Art-group from Kyrgyzstan recreated a postcard photo taken by Nikolai Chernysh in the 1970s depicting a young man and woman in traditional Kazakh clothing riding horses.

The project, which helped the organisers understand the reaction and get feedback, was a “successful experiment,” noted Veselova.

“The British Council organised the conference about creative industries, where a British fashion observer said that the best thing she saw in Astana was this mural art. We realised we needed to do it again,” she said.

The idea for the fest coincided with the capital’s 20th anniversary.

“As we know, this year Astana is celebrating its 20th anniversary and it is important to capture this history and comprehend it with art,” she added.

In April, the organisation announced an open call for sketches. During the month-long application period, 70 drawings were submitted by artists from Azerbaijan, Indonesia, Israel, Kazakhstan, Kyrgyzstan, Poland, Russia, Spain and Ukraine.

The participants were required to reflect local themes, including the nation’s history and culture. Some contacted the organisers for additional historical information, while others had previously visited the city.

The selection process had three stages – expert council, including French, Ukraine and Kazakh curators, the local administration and the public. The council selected 26 works, which were then judged by the akimat followed by online voting on Instagram and Facebook. 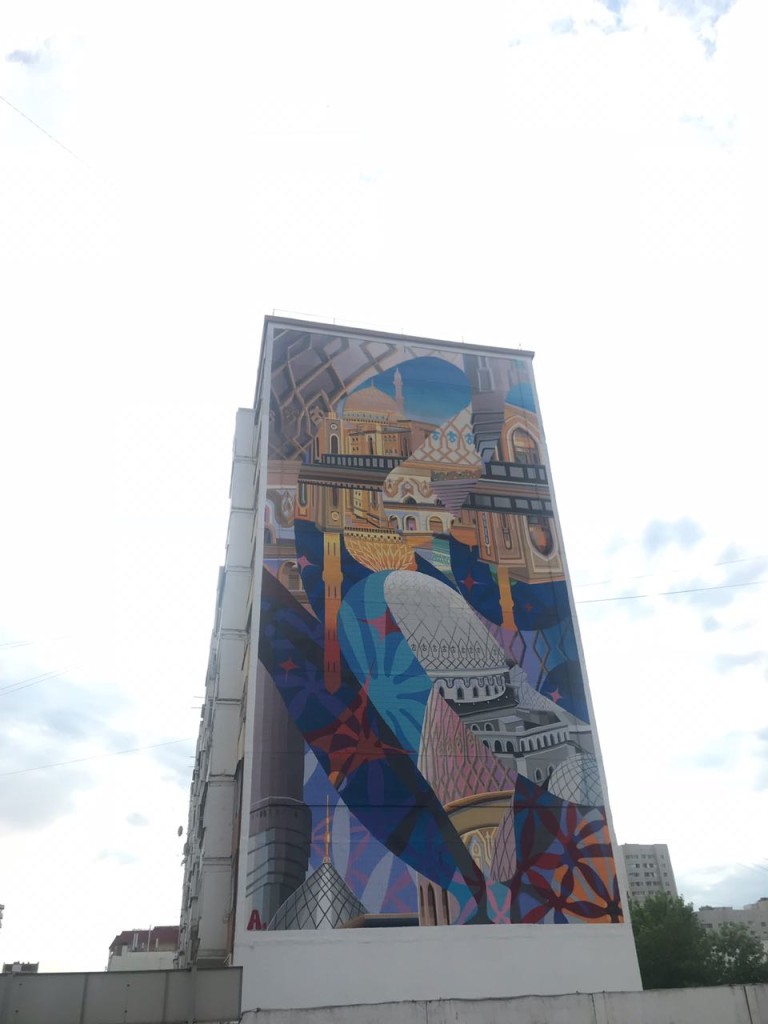 “In most cases, public opinion matched expert opinion. The expert council was set up to give Astana residents the chance to choose the best of the best. As professionals, they had to choose the works that had quality,” said Veselova.

Though the public could only pick from the works selected by the council, one became an exception. The sketch depicting a snow leopard, one of the symbols of independent Kazakhstan, did not advance to the next phase, but quickly went viral after artist Damir Lotfullin (Bozik) posted it on his page.

“City residents started writing they wanted bars [snow leopard]. Because of the reaction, we decided to add this sketch as well,” she added.

The decision to include the mural in the final list produced an unexpected, but positive effect.

“There are places in Astana that are used to dry clothes. There [near the house where the mural was to be painted] was an old such place and a newer one. We have no right to destroy anything, but the residents of that house collected signatures to remove this site, because it prevented one from seeing the mural. I believe this is a great effect of the festival, because art encouraged people to unite to solve the problem. Next time, it will be even easier for them to self-organise,” said Veselova.

The search for locations was also challenging.

“There is a certain urban development strategy. Relevance is important, because you cannot produce a mural wherever you want. For instance, you could not imagine the mural featuring Saken Seifullin anywhere but on Seifullin Street. It should be site specific,” she said. 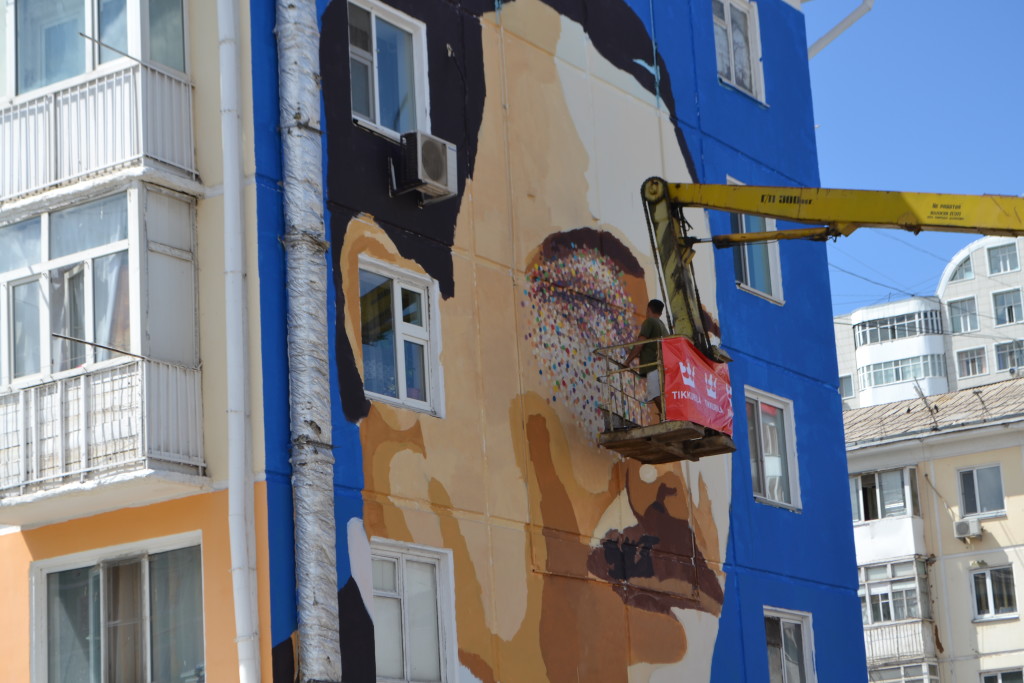 “Working in a public place, it is important to make it understandable for everyone, even for an unprepared person, and it should not provoke protest or frustration or hurt one’s feelings,” she added.

Murals are different from graffiti, as the latter has an element of illegality.

“Our project is completely legal. Here, we refer to mural art that takes its roots in Argentina. During the revolution (in Argentina), artists wanted to bring ideas of equality and enlightenment to the urban space and promote them with the help of art,” said Veselova.

The festival also generates positive interaction between the local art community and foreign artists. With the growing demand for urban space development, art is one of the ways to encourage people to go to the streets.

“To bring them [people] to the streets, the city should be interesting and it should provoke emotions and what could generate emotions better than art, because mostly it is art that touches people’s hearts,” she added.

Veselova said she is pleased the Saryarka district administration trusts them and listens to professionals. With her vast experience in art and working in other Kazakh cities, she noted the capital is distinct in its effort to understand and comprehend and its attitude inspiring.

“In fact, it is pleasant to work in Astana. I have worked in Almaty and Petropavlovsk. The public takes time to understand what you try to convey and does not reject it right away. Probably it is because the city is new and this spirit translated to people and something new for them is not rejection,” she said.

The Eurasian Cultural Alliance has been organising festivals for nine years in Almaty, promoting street art, running education projects and coordinating many exhibitions in Kazakhstan and abroad. Among its biggest projects are the ​Artbat Fest in Almaty, which is entering its ninth year, School of Artistic Gesture for young artists and four public art sculptures and four public places presented during EXPO 2017.