Sandra Real on being Mexican in Astana, cultural similarities and learning Kazakh

By Aidana Yergaliyeva in People on 18 July 2018

ASTANA – Sandra Real, a Mexican student at Nazarbayev University, recently shared her daily experiences and thoughts in an interview with The Astana Times. 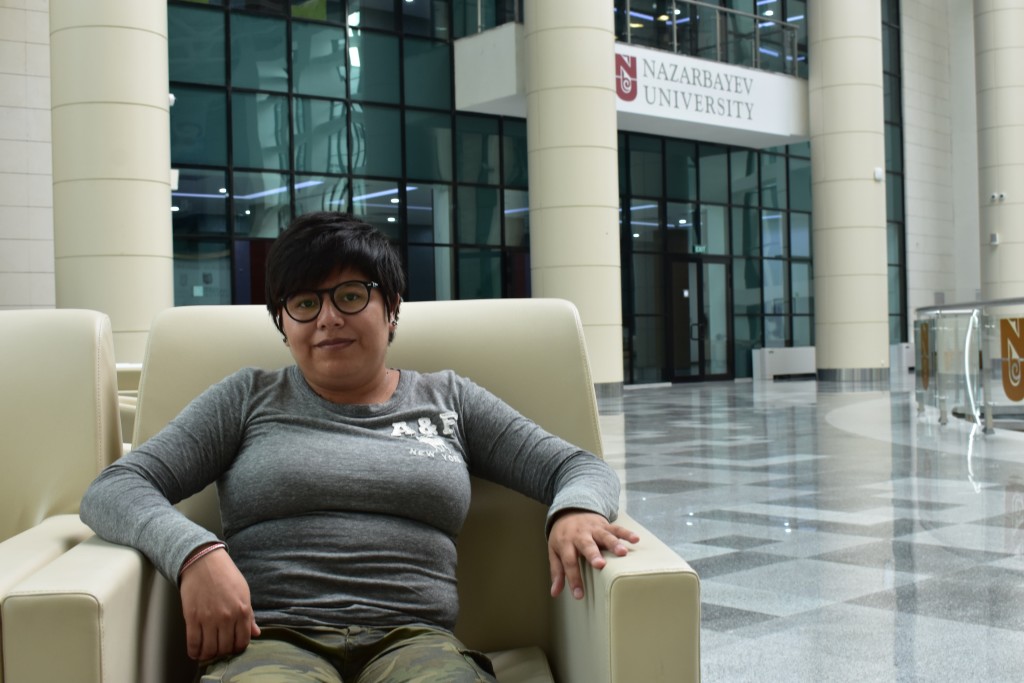 Real, who learned about Kazakhstan as a 10-year-old by reading a book about the Soviet republics, always dreamed of visiting the country. Her wish finally came true, as she has been living and studying in the capital for nearly a year and is willing to stay.

“After graduation, if we put this in mathematical quantities, I want to stay here 80 percent if there is an opportunity, because you know I think that Astana is slowly developing and there are many opportunities,” she said.

Real is one of only a few Mexicans living in the city, each of whom is either studying or conducting business. She knows only four others from her native land and while they typically communicate through social networking rather than formal gatherings, this year they plan to organise some cultural celebrations. Due to their small numbers, the festivities will not be solely dedicated to Mexico, but to the Latin American community in general.

While Kazakhstan has an embassy in Mexico, there is no Mexican embassy in Astana. As a result, visiting Mexicans must rely on documentation help from their embassy in Turkey. Real would like to help in establishing an embassy.

“Of course, not only all by myself, but with the collaboration of other Mexican citizens. Maybe, we can join and think about it in the future. I would like to assist if the opportunity presents itself,” she said.

Real would like to see more Mexicans in Kazakhstan. Businesspeople should consider exporting avocados, Mexico’s most abundant fruit, because those carried by local supermarkets are scarce and not high quality, she thinks. The city also lacks a restaurant with Mexican cuisine. She has also noticed many Kazakhs are interested in learning Spanish.

“There are a lot of people who are passionate about learning language. Some of them have already visited Spain or other Spanish speaking countries and some of them just amaze me. We had one event here at the university last semester – it was the day of Spanish language and culture. It was quite surprising to see so many people [interested] and also some of the speakers who participated in the event spoke the Spanish language so well. I was surprised with their level of proficiency,” she said.

Although Real enjoys living in Kazakhstan and wants to remain, the distance and lack of communication in Spanish makes her miss her homeland. Her culture is very important to her in spite of many problems like the high rate of corruption and instabilities.

“Even though I don’t use the Spanish language here, I listen to songs or I show my culture to the students here through gastronomic creations, as one of my passions is cooking. Of course, it is not very close to the original Mexican food, as it hard to find many ingredients here in Astana. But still I think this is a connection. Connection comes mostly from the soul,” she said.

Mexican and Kazakh cultures share a number of similarities, the most prominent being the importance of family.

“Usually, [in Mexico] you’re not independent until you are at the legal age. You still have support from you parents,” said Real.

Although the countries differ in their religious majorities, they have similar sentiments.

“While the majority of Kazakhs are Muslims, we [Mexicans] are Catholics. Actually, we don’t take religion quite as seriously as well. We are more on the secular part, especially the young generation. Of course, we have our beliefs, but we don’t have to visit a church every Sunday,” she added.

“For people who are not familiar with Kazakh gastronomic culture, it will be quite shocking to consume things like qazy (horsemeat sausage) and qarta (boiled horse intestine). For me, it is delicious. Beshbarmak (meat, noodles and onion sauce) is one of my favourite dishes here in Kazakhstan,” she said.

Real is learning Kazakh, but notes there is a lack of quality material available to help one master the language.

“There is only one book in English and it is not the best book on the market, because I feel even though you finish all the lessons in this book, there is still a lot to learn in the Kazakh language. It depends on the region you come from, maybe the expressions you use. Constructing one sentence can be interpreted in five different ways. Also, the part when you have to add suffixes [is hard]. The pronunciation is hard, as we foreigners don’t have some letters,” she said.

She started with a PDF of Colloquial Kazakh, using the book to learn the alphabet. Fortunately, she found the task a bit easier, because she studied Bulgarian five years ago and was familiar with Cyrillic letters. Real practiced the language in Mexico with native speakers during events and cultural celebrations organised by the embassy, but managed to learn only the basics. It is still a challenge to learn Kazakh in Kazakhstan.

“Actually, I still cannot construct a sentence, even though I’m immersed in the environment. Here, people I meet are more Russian speaking. There are only five people on my floor who speak Kazakh and sometimes they also speak Russian. It is more of a mixture of the two. At first, it was quite confusing to me. There are not many opportunities to practice,” she said.

Real’s facial features are very similar to Kazakh ones and in practicing the language she receives opposite feedback from people. Those who think she is Kazakh judge her for not speaking her “native” language, while others admire that as a foreigner she is trying to learn it.

“It was quite amazing when I wanted to buy kumyss (fermented mare’s milk). I enjoyed it and when I wanted to pay for it, the lady selling it said ‘No-no, it’s free. It’s free!’ I was like ‘why?’ and she said ‘you speak Kazakh,’” she said.