ASTANA – A Russian Soyuz-2-1a rocket with the Progress MS-09 cargo spacecraft was launched July 10 from the Baikonur Cosmodrome in Kazakhstan, according to RIA Novosti. 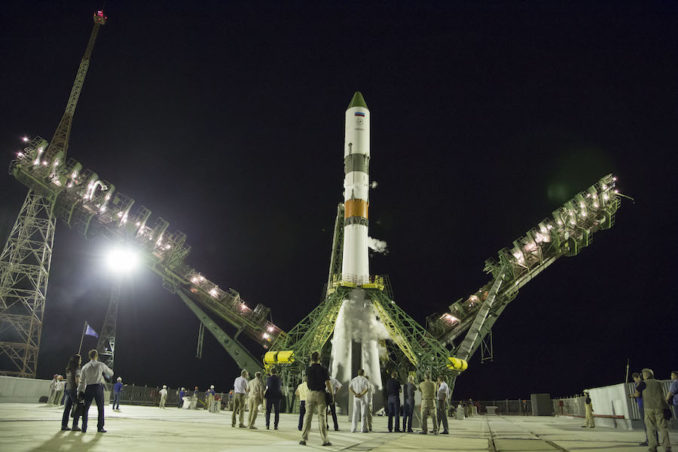 A few minutes after the launch, the cargo spacecraft separated from the third stage of the launch vehicle and entered the flight path to the International Space Station (ISS).

The flight’s mission is to test first a new ultra-short three-hour scheme of rendezvous and docking with the space station. According to its on-schedule launch, the Progress MS-09 mission embarked on a new rendezvous profile, which should allow the spacecraft’s docking at the station just three hours and 47 minutes or after around two revolutions around the Earth in the autonomous flight.

It was planned that the craft will dock to the station at 04:39 Moscow time. Progress MS-09 would become the fastest spacecraft in the history of the ISS.

The Progress MS-09 spacecraft was installed inside the Soyuz rocket’s nose cone during launch preparations at the Baikonur Cosmodrome. Photo credit: Roscosmos

Earlier, the fastest scheme for docking with the ISS took approximately six hours or four revolutions around the Earth. It takes 34 revolutions and more than two days to get to the space station.

Progress MS-07 and Progress MS-08 were also to be shipped by this scheme Oct. 12, 2017 and Feb. 11, 2018, respectively. But ships had to be launched on a reserve date, when the ballistic conditions no longer allowed reaching the ISS in three hours.

“External cameras were installed for the first time to capture the ascent and the separation between the spacecraft and the third stage of the Soyuz-2-1a rocket. Online streaming is not planned,” reported Roskosmos.

The spacecraft was packed with about 2.5 tonnes of cargo, including equipment, food, fuel and water. The cargo also incudes the Orlan-MKS spacesuit intended for spacewalks.

SiriusSat-1 and SiriusSat-2 scientific and educational satellites were assembled by students and specialists of the satellite company on the standardised platform. Russian cosmonauts Oleg Artemyev and Sergei Prokopiev will launch the satellites during the spacewalk Aug. 15. The satellites will study space weather.