ASTANA – The capital celebrated the 20th Astana Day with several days of festivals, concerts and sporting events across the city starting July 4. 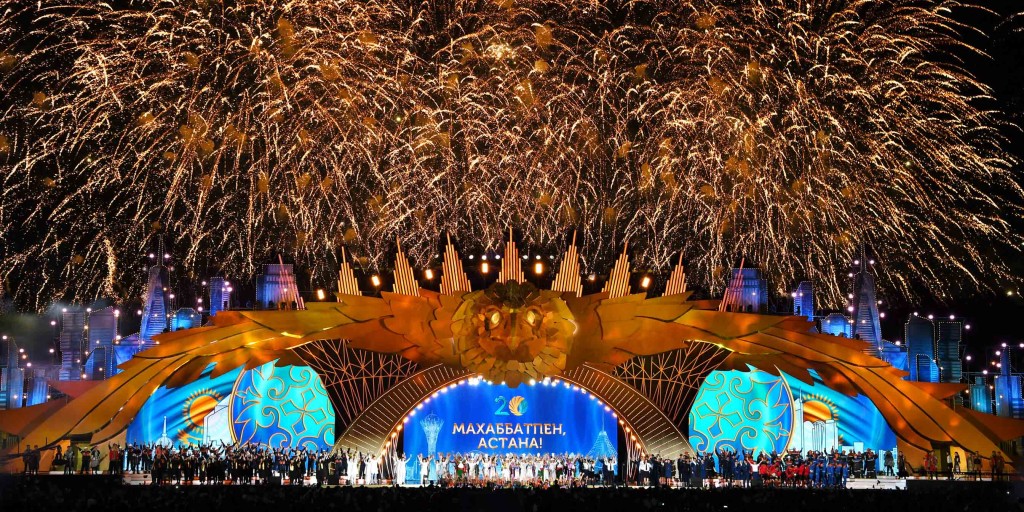 A flag-raising ceremony at 11 a.m. July 4 marked the official start of the Astana Day celebrations.

More than 60 artists performed during the Echo Asia International Festival of circus art every day July 4-8 at the local circus venue.

The opening ceremony of The Astana Samaly Festival of brass orchestras took place July 4 in the Astana Concert Hall. The festival ran through July 6 with a concert in one of the city’s squares.

Astana residents had an opportunity to listen to the jokes during the Eurasia Cup of International KVN (the Club of the Funny and Inventive) Humour competition in the Barys Arena.

A large wedding ceremony took place in the square in front of the Atameken Complex July 5 as 40 couples decide to get married on the capital’s anniversary. Such a ceremony has become an annual tradition.

Festive concerts took place July 5-6 in city parks and squares. The Spirit of Astana International Festival started July 6 near the Baiterek monument, where 18 bands and more than 120 musicians from 20 countries performed for three days.

The Astana Day celebrations ended with the gala concert at the square near the Kazakh Eli monument featuring Kazakh and foreign musicians. The event lasted for five hours culminating in a grand fireworks display.

Apart from cultural events, sporting events and championships were held. Among the attractions were Kung Fu and karate championships, the Astana Cup in baiga (horse race) and Uly Dala Rukhy national sports competition.

The celebrations, however, did not end July 6. Astana residents and guests can attend international exhibitions featuring works from the State Tretyakov Gallery (Russia), masterpieces from the Grand Palais (France) and private collections from the U.S. in the National Museum. Another attraction is the Alpamys theatre and circus show featuring artists from Cirque du Soleil, which will run Thursday to Sunday through Sep. 1.

Information on the other events is available at 20astana.kz.

Astana Day is celebrated July 6 since its official presentation in 1998. This year, the 20th anniversary of Kazakh capital was also marked with festive events across all the regions.