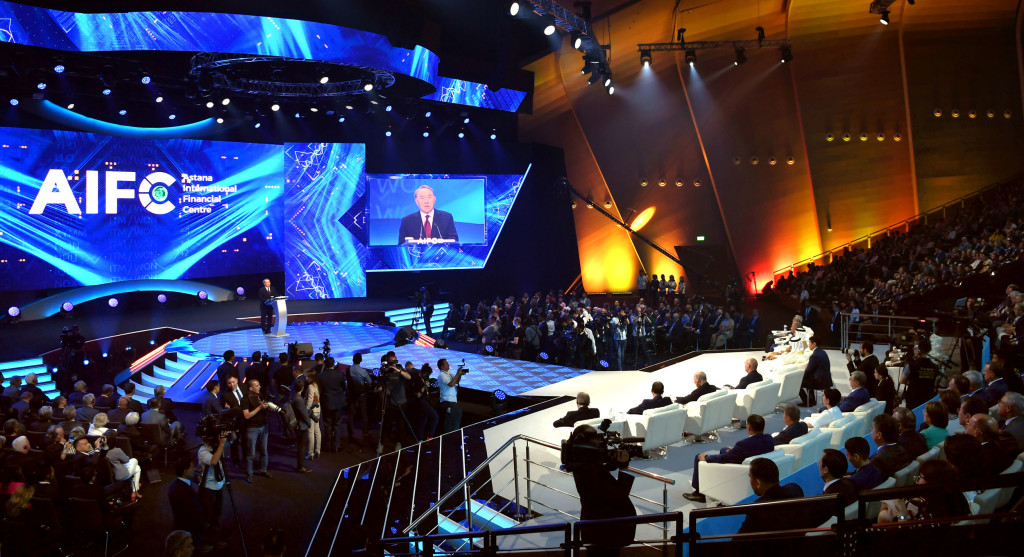 The new financial centre, in a new part of Astana where the city hosted EXPO 2017, is set to offer financial services, including in financial technologies, Islamic finance, green finance, capital market and asset management.

The centre has a management council, a financial services regulator, AIFC exchange, an independent financial court involving nine judges from the U.K. and the U.S., and an arbitration centre, among other bodies.

Kazakh officials expect the centre to attract $40 billion of investments by 2025.

The AIFC is the brainchild of Kazakh President Nursultan Nazarbayev who voiced the idea to set up the centre in 2015 with benefits offered to companies, an independent court and English common law principles incorporated in the work of the centre.

Kazakhstan recognised the need for long-term, sustainable institutions, he said.

“We thoroughly studied the global experience in establishment, development and work of financial centres across the world including in Singapore, Dubai, Hong Kong and other countries. The Kazakh model of the AIFC incorporated best practices of these structures,” said Nazarbayev.

“Astana should become the main financial hub of the region and in the long-term perspective should be among leading Asian financial centres,” said the Kazakh President.

The centre enjoys a special legal regime envisioned by constitutional law and offers incentives to companies, including exemption from corporate income tax and personal income tax for 50 years, a visa-free regime for citizens of 48 countries and a simplified employment regime.

Fifty companies have registered at the AIFC so far.

English common law principles will regulate the work of the centre and, according to Andrew Oldland, senior partner at British law service firm Michelmores, English law is characterised by flexibility and convenience encouraging countries to rely on it in the finance sector.

Boston Consulting Group Chair Hans Paul Bürkner said the IPO and the country’s large-scale privatisation programme will serve “another major accelerator for development of Kazakhstan and position Kazakhstan as a regional financial centre” as well as provide a major boost to develop capital markets.

“Boston Consulting Group had the privilege to be working with you and team on the idea of the AIFC and it has become a real milestone in the development of Kazakhstan and Astana and stock financial markets here,” he said.

International Monetary Fund Managing Director Christine Lagarde conveyed her congratulations and said the AIFC is a “great opportunity and platform for Kazakhstan and region to develop deeper financial market and attract investment.”

“Transparent, reliable and favourable normative base for the market, modern infrastructure and strong human capital will boost the potential of the AIFC in reaching the scale of a regional hub, an example of innovation use, high quality services, effective management and reasonable methods of dispute settlement,” said Pulitzer Prize winning author Daniel Yergin hosting the ceremony as he read her letter.

“The country occupies a really important strategic position. The potential for the financial centre is huge and this is a growing market. The centre of gravity of the world’s economy is moving east over time and Eurasia is key part of that,” said Maude.

Investors are also interested in continuing reforms in Kazakhstan, he added.

“This is a young country. Moving from a command economy to a genuine market economy takes time. As the government acknowledges, there is a need for more structural reforms in economy. You need this country to be where it is easy to set up business, grow business and create jobs,” said Maude.