By Aidana Yergaliyeva in Nation on 15 July 2018 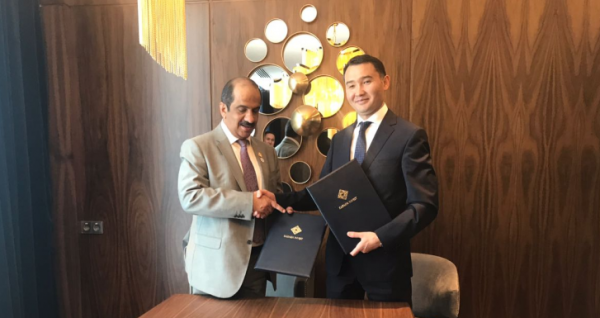 “Your country has been and remains a strategic partner for the UAE in Central Asia and we are paying great attention to the development of the economy of Kazakhstan and the prospects that it opens for Arab business,” said Al Jarwan.

Tuyakbaev noted Kazakhstan adheres to the principles of openness, protection and full support of international investors working in the country.

“The state privatisation programme opens even more unique opportunities for your country’s business in Kazakhstan and we are ready to provide all-round assistance and support to companies from friendly United Arab Emirates on an ongoing basis,” he added. Kazakhstan and the UAE established diplomatic relations in 1992. Trade and economic cooperation between the countries has subsequently increased significantly.

The UAE ranks first among Arabian Peninsula countries in terms of commodity turnover with Kazakhstan. The volume increased 3.5 times last year to more than $380 million. according to the press service of the Ministry for Investments and Development .

In general, bilateral investment cooperation is showing stable growth. The inflow of direct investment from the UAE to Kazakhstan in the past decade has reached $2 billion, while the outflow is approximately $1 billion. In 2017, the number of joint ventures in Kazakhstan with the participation of the Emirati capital was estimated to be more than 190.