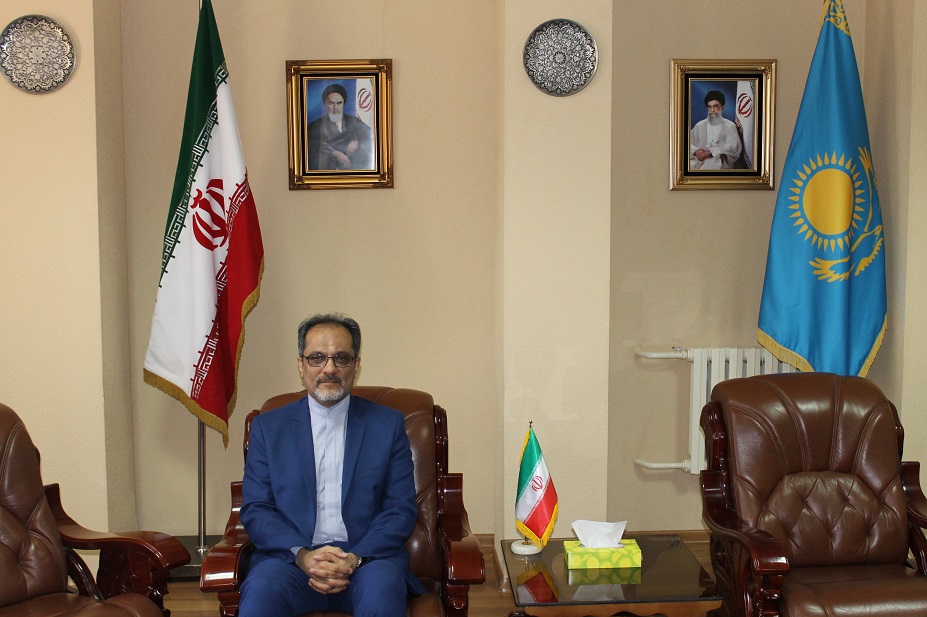 The centre was one of the first in Kazakhstan after the country gained independence.

“The Iranian Embassy opened in January 1992 in Almaty and, next year in April, the two countries signed an agreement with the subsequent opening of the cultural centre in 1995 in Almaty,” he said in an interview for this story.

“If we look at the work of the centre for the last 23 years, we can say that we have done huge work in education, library and art,” he added.

The centre has been supporting and undertaking efforts to promote Iranian culture in Kazakhstan, offering free Persian language courses and culinary classes for students learning Persian and hosting celebrations of Iranian holidays.

Developing cooperation with Kazakh universities is among the centre’s priorities. It is currently working with Al Farabi Kazakh National University, Abylai Khan University of International Relations and World Languages, and Abai Pedagogical University, all in Almaty.

Kazakh students with bachelor’s degrees learning Persian language and literature are eligible for scholarships from the Iranian government to continue their master’s and doctoral studies in Iran.

“Many Kazakh students who studied Persian language and literature, international relations and governance have graduated from prestigious Iranian universities, such as Tehran University, Shahid Beheshti University and Allameh Tabataba’i University,” he added.

Professors also have an opportunity to study and train at Iranian universities. More than 20 experts from the Kazakh National Library in Almaty, Kazakh National Academic Library and its Centre for Manuscripts and Rare Books attended courses on restoring ancient manuscripts.

“This year, we plan to send a specialist from Iran to Kazakhstan, so that Kazakhstan will save money and local specialists in manuscripts will be trained here,” said Zeineddin.

“The Iranian Ministry of Science selected the Shahid Beheshti University as a university connecting universities in Iran and Kazakhstan. We will make every effort to serve as a link between universities, including an exchange between professors and students as well as a provision of scholarships to students in both countries,” he added.

The centre organises different exhibitions as part of its efforts to familiarise the local population with Iranian culture. In July, it presented a display at Kazakh National Library of the works of well-known Persian miniature art master Mahmoud Farshchian, who combines classical Persian art with Western art elements. The exhibit was dedicated to the capital’s 20th anniversary.

Iranian representatives also participates in the Congress of Leaders of World and Traditional Religions, a major annual event in Kazakhstan facilitating dialogue between representatives of different religions and heads of state, international organisations and NGOs. This year’s congress is slated for Oct. 10-11.

“Iran is actively participating in the dialogue between religions and confessions organised in Kazakhstan and is a permanent member of the Congress Secretariat. Every year, Iranians attend the meeting. We will continue taking an active part in such important events and participating in a religious dialogue both at the global and regional level,” said Zeineddin.

In 2016, the centre organised a visit of well-known Kazakh singer Marat Omarov to participate in the festival celebrating the birth anniversary of Prophet Muhammad.

Zeineddin noted he was not familiar with Central Asia before coming to Kazakhstan three years ago for his third diplomatic mission. His first mission was to Zagreb and second to Moscow.

He once asked a professor at the university in Tehran about the role of Kazakhstan in Central Asia.

“This professor told me one thing. We have five Central Asian countries that can be compared to a hand and Kazakhstan plays the role of the thumb. Four fingers would not be able to do anything without the thumb. This was an expert and researcher focusing on Central Asia and in fact, this is true,” he noted.

“Once, we were on our way to Borovoye and a tire on my car got punctured. We were trying to repair it on our own as we had a tool that repaired tires, but it was also broken. Then, a car stopped with a Kazakh family inside. They stopped and were helping us to change the tire for more than one hour. I was so pleased and it is still a warm memory for me,” he added.

He said the two countries are close neighbours that “lived side by side for more than 1,000 years.”

“This undoubtedly generates a common link that brings us closer to each other. Many names are familiar to people in both countries. They can understand more than 3,000 common words,” he added.

Islam and common culture also serve as a factor binding the people of Kazakhstan and Iran.

Zeineddin recalled Khoja Ahmed Yassawi, a Turkic Sufi poet of the 12th century and one of the most influential spiritual leaders in the region. His mausoleum, a popular sacred site, is located in Turkestan in southern Kazakhstan.

“He received his education in Bukhara from Yusuf Hamdani [one of the first Sufi scholars in Central Asia], who was Persian. Emir Timur [the first ruler of the Timurid dynasty and founder of the Timurid Empire in Persia and Central Asia] instructed building the mausoleum. It was done by Persian architects from Shiraz, Isfahan and Tebriz. All of them were Iranians,” he said.

“These important moments are part of the history of Kazakhstan and many historical sources about Kazakh history are written in Persian and are kept in old books,” he added.

He believes the upcoming visits to the Kazakh capital by the Iranian Minister for Culture and Minister for Education will take bilateral ties to a new level.