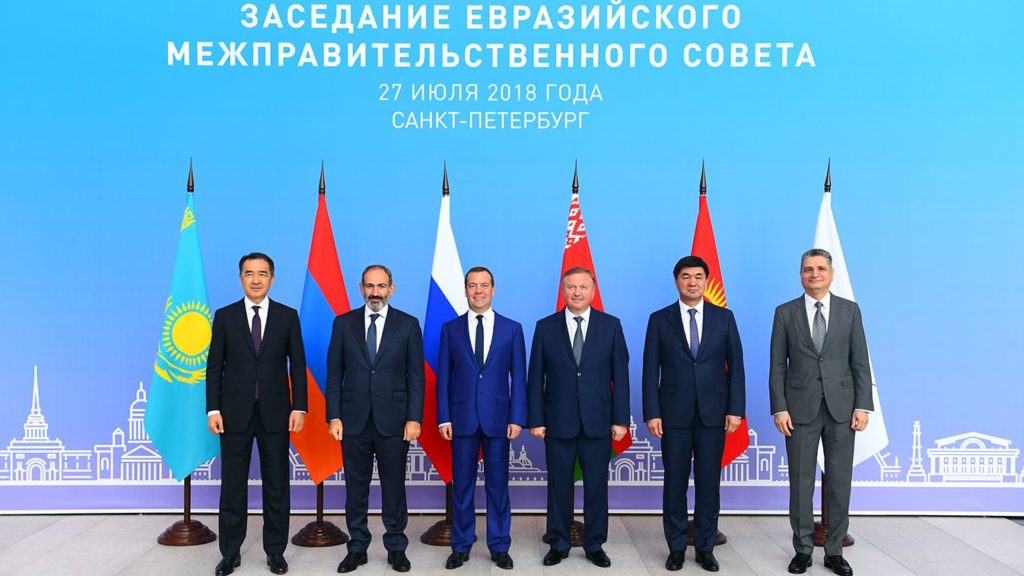 The meeting brought together the prime ministers of Armenia Nikol Pashinyan, Belarus Andrei Kobyakov, Kyrgyzstan Mukhammetkaly Abulgaziev, the Russian Federation Dmitry Medvedev and Chairman of the Board of the Eurasian Economic Commission Tigran Sargsyan.

The participants reviewed the implementation of the digital agenda of the Eurasian Economic Union and interaction in agriculture, energy and transport. They also discussed forming a common gas market, creating a unified system for the transit of goods across Union territory using technical means and interfacing state information systems.

Sagintayev told his counterparts the items discussed at the meeting would promote economic, political and social stability in the Eurasian region. The Kazakh head of government noted a correlation between inter-union cooperation and trade growth.

Trade within the Eurasian Economic Union in the first quarter of 2018 compared to 2017 grew by $13.9 billion or 16.4 percent. Trade by union member states outside the union grew 23.8 percent or by $172.3 billion. The union GDP is expected to grow 2.1 percent in 2019, according to Eurasian Development Bank forecasts.

“We are striving to improve the quality of products, while not creating unnecessary management tools and costs for business. Work is underway to introduce about 70 amendments to the treaty on the EAEU to improve the rule of law in the Union. Trade and economic agreements concluded with China, as well as agreements on a free trade zone with Vietnam and Iran have been concluded. We need to continue to work on identifying partners in the conduct of foreign trade policy,” said Sagintayev, stressing that important documents are also due to be adopted soon.

“Kazakhstan has always been a supporter of attracting new players into the orbit of our integration. Here, I note that the President of Kazakhstan (Nursultan Nazarbayev) put emphasis on the need for cooperation of the EAEU with technologically successful and investment-attractive countries and integration blocs,” said the Kazakh prime minister.

Sagintayev reminded the participants of the meeting about the strategic tasks adopted May 14 by the heads of member states at their Supreme Council meeting that need to be developed. At that Supreme Council meeting, Nazarbayev presented initiatives to create infrastructure mega-projects: high-speed railways and highways on the China-Kazakhstan-Russia-Belarus-Europe route, a navigable canal through the Caspian and Black Seas, as well as a proposal to eliminate obstacles to inter-union trade.

Optimising infrastructure, said the Kazakh prime minister, will build a bridge between Asia and Europe, the East and West as well as the Pacific and Atlantic Oceans. Additional Supreme Council meetings will also help reduce economic barriers in the short term.

“For us, this is a priority foreign economic project. We created the EAEU as an open, equitable integration association. Building our relationships on the principles of seeking compromises and working out effective solutions will be a powerful incentive for strengthening the Union, increasing its attractiveness in the world community,” Sagintayev said.