By Elya Altynsarina in International on 10 July 2018 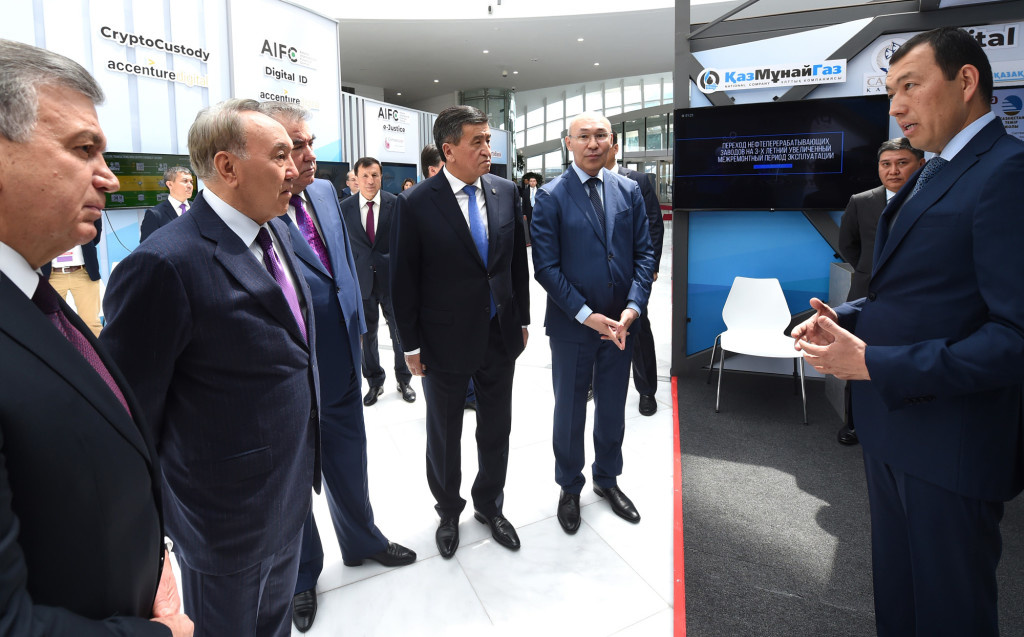 “AIFC participants will have access to the capital not only of Kazakhstan and the region, but the whole world. Unprecedented conditions have been created here that have no analogues in the post-Soviet space,” said Nazarbayev.

The AIFC Exchange launched the previous day, demonstrating a modern and high-tech infrastructure. One of the financial centre’s main goals is creating an environment to develop innovative financial technologies.

“The American NASDAQ and the Shanghai Stock Exchange are already participating in its activities,” he added.

AIFC Governor Kairat Kelimbetov reviewed the main principles, activities and opportunities open to the region’s financial systems and invited businesses along the historic Silk Road to join the centre.

In his welcoming speech, Nazarbayev emphasised the importance of the words Kazakhstan, Independence and Astana for every citizen of the nation. He noted the ancient town of Bozok was a forerunner of the modern capital’s location.

“Astana was the residence of Kazakh rulers, ranging from Yedige to Az-Tauke Khan. Archaeologists found the summer rate of Khan Az-Tauke near the village of Kuygenzhar on the bank of the Yessil River,” he said.

He also thanked everyone who contributed to constructing the city and the regions for their anniversary gifts, including a botanical park, kindergarten, futuristic bridge and historic monuments.

Nazarbayev noted the capital marks the beginning of a new century in Kazakhstan, as statehood institutions have been established since the first years of independence and the city has become a new political centre recognisable throughout the world.

Combined with national sovereignty, the capital is among the brands that provided Kazakhstan with global recognition. As a centre of the country, it helped form a new model of political, economic and social development.

The landscape unites the urban area and the flat lands. The city promotes multi-ethnic society, claiming its role as a centre of peace and harmony for the entire world.

The economic opportunities opened new migration processes in the country and the population of the capital has grown four times, reaching one million. Each aspect led to its own special lifestyle and the city administration is working to make the urban space more comfortable for residents.

“The whole country is proud of this city, and our cities look up to it. The dynamic development of Astana has positively affected the economic growth of the regions,” said the head of state.

The capital is also striving to establish its place among global trends in new ideas and innovations.

“Every year, the Astana Economic Forum hosts the discussion of economic development and new trends. The city has become a centre where historic decisions affecting the course of international movements are made. The historical documents of the Shanghai Cooperation Organisation (SCO), Conference on Interaction and Confidence-Building Measures in Asia (CICA) and the European Economic Area (EEA), which have influenced social and economic growth throughout the world, were signed here,” said Nazarbayev.

The President also spoke about the Astana Declaration adopted following the Organisation for Security and Co-operation in Europe (OSCE) summit and the Organisation of Islamic Cooperation (OIC) summit on science and technology.

“For 20 years, Astana has become the epicentre of global integration, security and peace-making. After the historic OSCE summit, the concept of the ‘Spirit of Astana’ firmly entered the world of politics. Our constructive initiatives in the field of a nuclear weapons-free world and a just world order contributed to the election of Kazakhstan as a non-permanent member of the United Nations Security Council and the chairpersonship of this authoritative organisation,” he added.

Over the past 20 years, 22 monarchs, 180 presidents and the heads of 109 governments and 114 international organisations have visited the capital. The trips by heads of state and high-ranking officials are the most important indicator of friendly relations between nations and each visit has expanded the number of the city’s friends throughout the world, said the President. He also noted his personal friendships with international leaders and their impressions of the capital.

The city plays a key role in modernising the economy in light of the Fourth Industrial Revolution and integration into the global economic space. The gross regional product has grown 190 times, reaching $14.5 billion in nominal terms and increasing 5.5 times in real terms. The volume of investments in the last 20 years has been nearly $23 billion and state investments to develop the capital have repaid close to 2.5 times. The city is also currently undertaking strategies to join the global technological trend of Industrialisation 4.0.