ASTANA – Galym Arystanbayev, a 40-year-old senior sergeant in the Zhambyl region police department, is the father of 11 children who believes in the importance of unity within a family. He and his wife, Aliya, have adopted eight children from local orphanages. 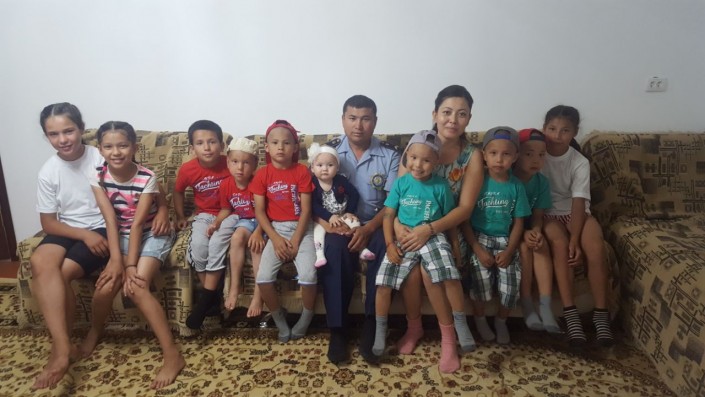 Arystanbayev is one of 102 finalists in Kazakhstan’s 100 New Faces project, which showcases their exemplary personalities and spreads their success stories.

“Upbringing starts at home; therefore, we make every effort to bring our children up properly. We want to motivate them to follow their passions. One of our children dreams of becoming a teacher, while the other is keen on boxing. One of my sons wants to follow in my footsteps and be a police officer,” he said.

The couple had three sons and always dreamed of a daughter.

“At that time, my wife came up with the idea of adopting a baby girl. I was not against it, so we went to the orphanage and found our daughter. It occurred that she also had a little sister, brother and a friend. For a couple of weeks, we took them home for weekends and after several months decided to adopt five children,” he added.

“My wife, Aliya, who previously worked as a teacher, is mainly responsible for the upbringing and care of the children. She decided to quit her job and devote herself completely to the family,” he said.

The couple is raising six sons and five daughters. The family is truly international, as the children represent different ethnic groups.

“We have Azerbaijani, Chinese, Uzbek, Romanian, Uyghur and Russian children. Our youngest daughter is Tatar. Our children are all different; however, they all speak one language, Kazakh,” he noted.

In 2017, the Arystanbayevs were awarded first place in the Mereili Otbasy (Happy Family) regional contest.

“I dream of my children growing up as decent citizens of our country,” he said.

Arystanbayev does not want to limit the number of youngsters to 11, however, and he and Aliya plan to adopt more children.