ASTANA – Fifty-six kilometres of bike lanes will be introduced for the capital’s 20th anniversary as part of its environmental protection and nature use management, reported the akimat (city administration) press centre. 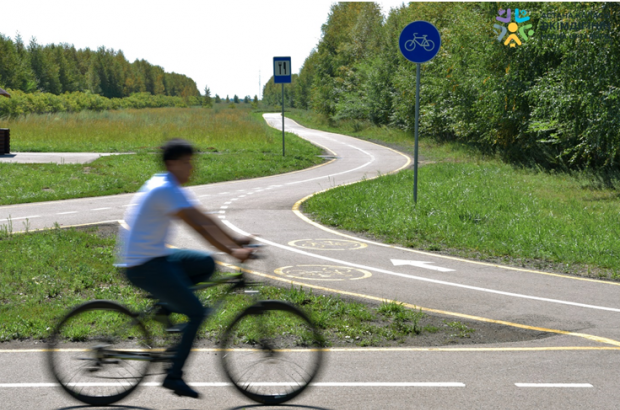 Cycling routes will be created in the Yessil district starting from Central Park to Mangilik El Street, Kabanbai Batyr Avenue, Ryskulov Street and Astana-Karkaraly Highway, then southwest of Taldykol Lake to Kurgaldzhyn Highway. The widths will vary from 1.5-3 metres.

Local authorities are seeking to promote a healthy lifestyle among the population.

“Each year, we see a substantial increase in the number of people who do sports. Based on the official statistics, to date 28-30 percent of Astana residents systematically do sports. We expect this number to increase by a factor of two in the coming two-three years,” noted the release.

“In fact, we received many requests from residents to increase the number of bike lanes. During warmer periods, people can ride a bike to travel around the city. This year, we are intensively working to open new tracks. You can see the special lanes along Kunayev Street,” it added.

New parks will also have special bike lanes. The botanical garden will add 14.2 kilometres of tracks; Linear Park, extending from 24th Street to the Abu Dhabi Plaza, will have 10 kilometres and the administration is considering reconstructing Arai Park to include interior cycling routes.

Developing a bicycle infrastructure is a good incentive for citizens to move to eco-friendly vehicles.

“I ride a bike three times a week to get to work in summer. Cycling is faster and you save time waiting in traffic. For me, it is a perfect balance between exercise and leisure. I use the Astana bike system,” said one city resident.

The city’s first automated bike rental system, launched in 2014, is popular among the public. The season extends from the end of April to October and one of its goals is to provide affordable transport for residents and tourists.

“In my opinion, the infrastructure is not very developed yet in Astana, but I see a lot of improvements and I am glad that the city has introduced bike lanes,” she added.

The five-stage project to develop bike lanes will be completed by 2022. Construction of cycle tracks on the right bank of the Yessil River will begin next year during the second phase.