ASTANA – A display of Minhwa Korean folk art opened at the Library of the First President June 13 within its international project Dialogue through Culture. The exhibit presents 57 works including paintings, sculptural compositions and household items like dishes and furniture. 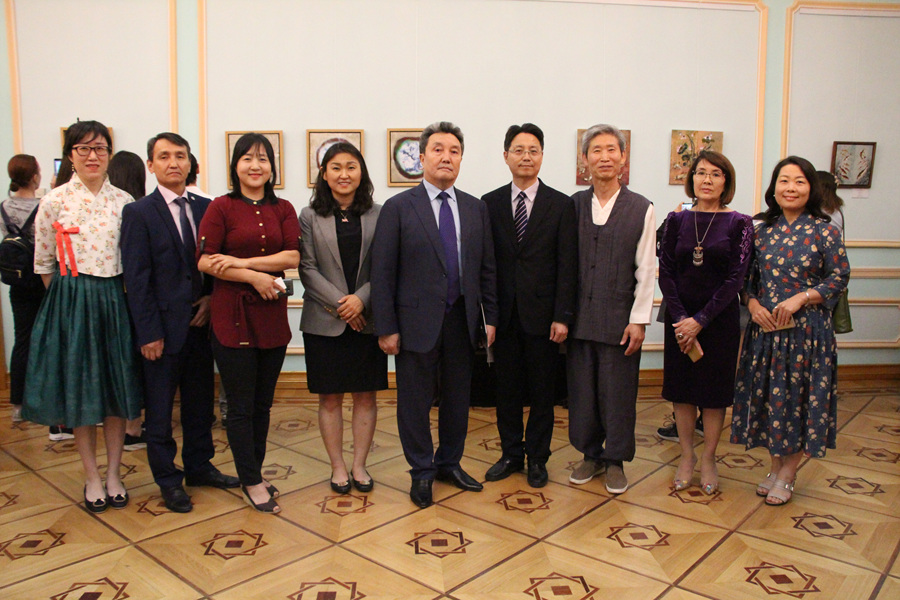 The exhibition is a vivid example of meaningful dialogue between the two cultures, noted Deputy Director of the Library Amerkhan Rakhimzhanov in his welcoming speech.

“The special meaning of today’s exhibition is attached to the fact that Koreans are one of the largest ethnic groups in Kazakhstan, reaching about 100,000 people. Representatives of this ethnic group are represented in the Kazakh Majilis (lower house of Parliament) and participate in the Assembly of the People of Kazakhstan. The language and culture of the Korean people are fully integrated into the modern cultural policy of Kazakhstan. Korean culture is very popular among Kazakh youth. I want to emphasise that by organising the exhibition within the walls of our library, we prompt the deep historical lines of culture and history of Korea for our visitors,” he added.

The exhibition presents the works by Min Bongi, O Sona and Yu Sundok, recognized Minhwa masters who have won many international contests, said deputy chief of mission of the Korean embassy Khan Manchun. A large delegation from the Minhwa Museum of Korean Folk Art came specifically for the opening.

“We wanted to depict the diversity and beauty of Korean folk art for Astana residents and visitors. We also expect to welcome the representatives of the Korean diaspora so that they can feel closer to their historical homeland,” said O Sona.

“The flourishing moment of Minhwa art began in the 16th-17th centuries during the Joseon dynasty. Korean folk art was used everywhere and had a wide practical application in everyday life and in various ceremonies like the wedding. Each picture had a unique character and deep meaning,” added the artist.

After the opening ceremony, visitors were invited to attend a master class conducted by the artists.

The event was organised by the Library in cooperation with the Korean Embassy cultural centre and the Minhwa Museum of Korean Folk Art. The exhibit will run through August 12.