By Aigerim Seisembayeva in International on 15 June 2018

ASTANA – Foreign Minister Kairat Abdrakhmanov briefed members of the European Business Association of Kazakhstan (EUROBAK) and members of the diplomatic corps on Kazakhstan’s efforts to improve the business climate during a June 12 meeting in Astana. 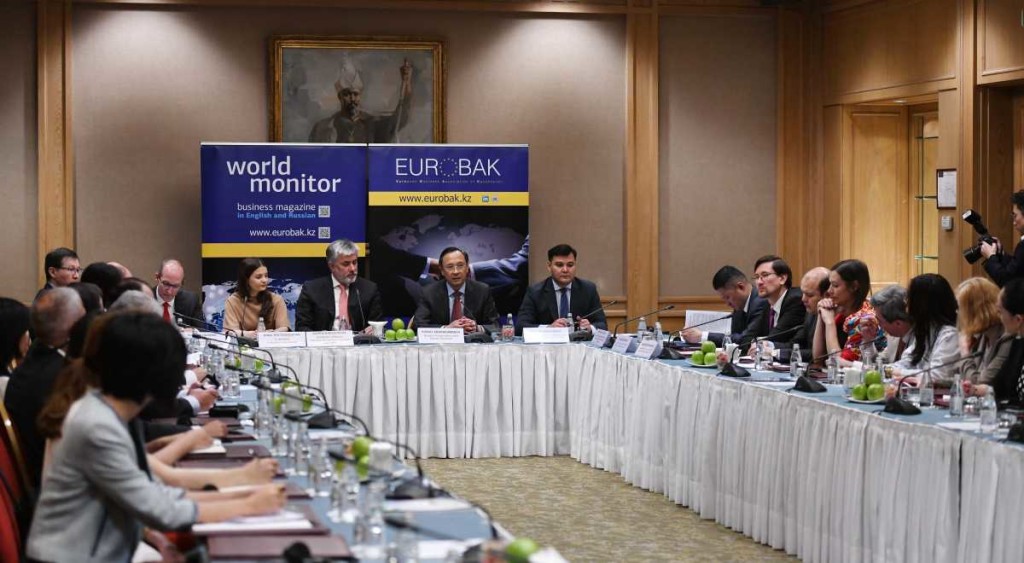 Abdrakhmanov said the foreign ministry coordinates all governmental bodies and organisations in their work with foreign companies. He also noted that the ministry uses all of its assets, including overseas missions, to work with foreign businesses.

He also told the gathering that Kazakhstan has established a multi-layered system to ensure direct dialogue between the state and investors, including the Foreign Investors’ Council under the President of Kazakhstan, the Council on Improving the Investment Climate under the Kazakh Prime Minister and the Institute of Investment Ombudsman headed by the Kazakh Minister for Investments and Development.

The minister encouraged European companies to work with Kazakh Invest, Kazakh Export and Kazakh Tourism, three recently established national companies, which have a wide range of powers to work with foreign partners.

Abdrakhmanov noted that the EU is Kazakhstan’s largest investor at 49 percent of total investment in the country.. The EU’s share in Kazakhstan’s total trade turnover reached 38.7 percent last year. And Kazakh-EU trade grew by almost $6 billion over the past year. There are also about 5,000 joint ventures with European companies operating in Kazakhstan.

The minister said Kazakhstan is creating infrastructure to better promote Kazakh products in foreign markets, including the European Union. The country is also ensuring the compliance of national products with Organisation for Economic Cooperation and Development (OECD)and EU standards. Abdrakhmanov asked the European businesses to help Kazakhstan be included on the list of countries meeting the requirements for export to the EU. He also said he hopes negotiations with the EU will simplify the bilateral visa regime.

Abdrakhmanov also noted that the Eurasian Economic Union (EAEU), like the European Union, does not limit its participants in conducting independent trade and economic policy.

“A vivid manifestation of this is the signing of the EPCA (Enhanced Partnership and Cooperation Agreement), which we view as a modern foundation for the protection and promotion of Kazakhstan’s economic interests in Europe and vice versa,” he said.

The minister added that EAEU-EU cooperation is beneficial to the entire Eurasian continent.

“Establishing cooperation right now is especially relevant in the light of the difficulties the global economy is experiencing. And it is no less important that our cooperation can become a determining factor in easing the political tension and a locomotive of the continent’s economic development,” he said.

Responding to questions from European business persons about sanctions between Russia and the West, Abdrakhmanov said the sanctions hurt businesses and ordinary people. The slowdown of the economy in Russia – Kazakhstan’s closest trading partner – and restrictions on Western businesses have also impacted Kazakhstan’s economy, he said, adding that the country supports overcoming the “language of sanctions.”

Abdrakhmanov also urged the EUROBAK and its members to take part in the July 3-5 Astana Finance Days, a series of international events celebrating Astana’s 20th anniversary. The main event will be the official launch of the Astana International Financial Centre (AIFC). According to the foreign minister, the launch of the AIFC, the International Green Technologies and Investment Projects Centre and the International IT Startup Hub on the premises of the EXPO 2017 provides a good opportunity to implement joint initiatives.