By Anuar Abdrakhmanov in Sports on 26 June 2018

Kazakh boxer Meiirim Nursultanov recently knocked out Mexican Josue Obando in the sixth round of a fight at the Belasco Theatre in Los Angeles, California. 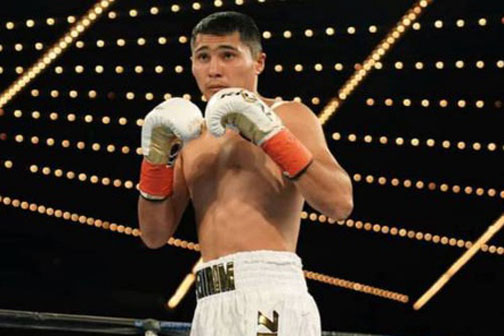 The win was Nursultanov’s sixth victory in as many bouts since turning pro in November 2016. “Meiirim showed a good fight. One can think that being in America and gaining experience in professional boxing they make us fight against weak boxers, but that is not true. Even if the boxer has losses, then they are because of good boxers. For instance, Josue Obando had a fight against Matvey Korobov. It is for certain that many expected a fast victory from Nursultanov, but we had told him that the Mexican boxer is a hardy one, so a skillful fight was needed. Fast knockouts are cool, people like it, but in terms of prospects and plans for title fights, it is better to box within many rounds,” said Madiyar Akishev, Kazakh light middleweight boxer, who also trains in America.

Nursultanov’s next fight will be Aug. 4 in Atlantic City, New Jersey. He will fight on the undercard of a bout between Russian Sergey Kovalev and Colombian Eleider Alvarez.