ASTANA – “Giselle,” directed by Brazilian choreographer Ricardo Amarante, will premiere June 23-24 at the Astana Ballet. The performance will open the Eurasian Dance Festival, the second international festival of ballet art, to be held June 24-30 in the capital. 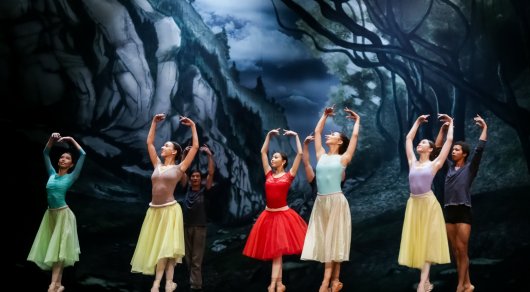 The ethereal, classical ballet presents the story of love, which proved to be stronger than death. The two-act performance is based on the poetic legend about the Willis written by Heinrich Heine.

In this production, the Astana Ballet Theatre discovers new aspects of the ballet. Amarante will create a new interpretation while not changing the spirituality and poetry which has kept it atop the world of romanticism.

“I would like to bring my vision to the performance through the Astana Ballet artists. It will not change substantially, but a certain interpretation will take place. ‘Giselle’ will showcase the creative potential and strength of the Astana Ballet troupe,” he told tengrinews.kz

Amarante danced the part of Count Albert, Giselle’s lover, for several years in Europe. He studied it thoroughly before taking the role as choreographer.

This ballet tells the tragic story of the Willis, dead, young unmarried girls who were betrayed by their beloved. Giselle, a peasant girl, became one of them, but could not abide the humiliation and died of a broken heart.

“At night, leaving their graves, the Willis take revenge for their ruined lives. They lead a man (Count Albert) they meet to dance and bring him to death. But Giselle’s love for Count Albert was stronger than evil and she forgave and saved the count who deceived her. Albert continues to live, but an eternal regret of lost love takes up in his heart,” noted the theatre.

The ballet has existed for more than a century, each time touching the audience, regardless of time, place and circumstances, with its distinctive aesthetics, elegance and lightness.

The music by Adolphe Adam performed by the symphony orchestra will seek to provide a special atmosphere. The lively scenography designed by Rene Salazaz is also expected to be well received by the audience.