By Aigerim Seisembayeva in Business on 7 June 2018 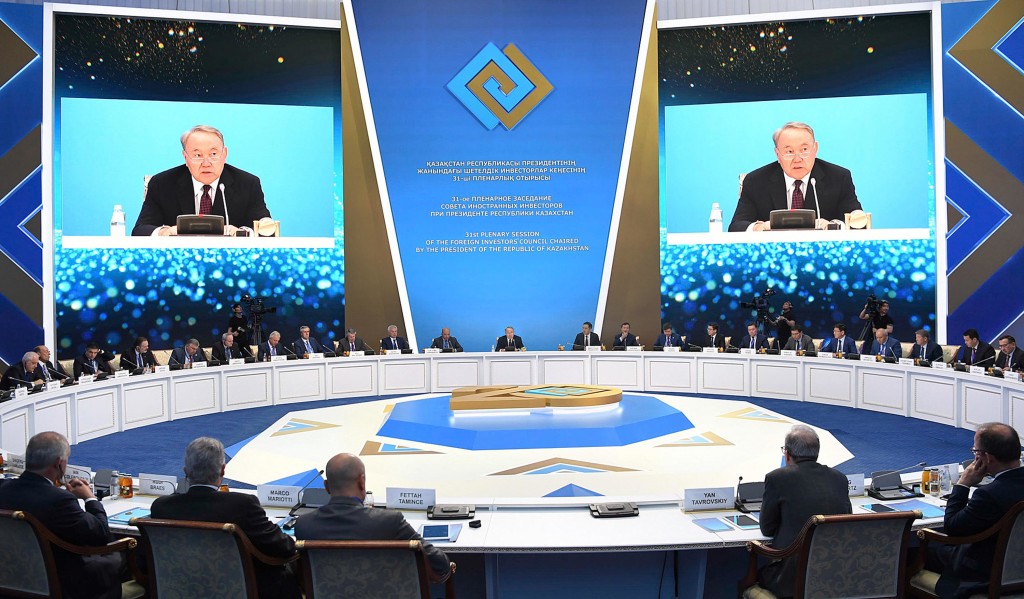 Kazakh President Nursultan Nazarbayev briefed the session on Kazakhstan’s efforts to ensure the stability of the national economy in the face of global challenges.

“We are witnesses and participants of rapid global changes and challenges that come with them. To overcome them, I set the task of the Third Modernisation a year ago. Macroeconomic stability is being ensured, the business climate is improving,” said the President.

The Foreign Investors’ Council was established in 1998 to facilitate dialogue between the Kazakh government and foreign investors and address challenges related to foreign investment in Kazakhstan. The council includes heads of 35 multinational companies and international organizations such as the European Bank for Reconstruction and Development (EBRD).

In his brief, the president outlined efforts to modernise the country’s economy and increase its competitiveness.

“The first one is the improvement of the regulatory environment. The new Code on Subsoil and Subsoil Use, tax and customs codes have come into force. A package of legislative amendments on business regulation has been adopted. OECD (Organisation for Economic Cooperation and Development) standards are applied in all spheres,” he said.

The President stressed that attention should be paid to ensuring the rule of law and improving the quality of public administration.

“Second is the diversification of the economy and the introduction of new technologies. More than 1,200 new enterprises have been launched within the industrialisation programme; investment and export strategies are being implemented,” Nazarbayev said.

He also highlighted the importance of major projects with transnational corporations, the development of agrarian science, the transfer of technologies and maintaining high growth rates in the construction industry.

“We are in the process of creating a Eurasian multimodal transit-transport hub. The Nurly Zhol infrastructure programme is aimed at strengthening the Eurasian integration and linking with China’s Belt and Road Initiative. The Astana International Financial Centre will be presented on July 5. It is to become the core of Kazakhstan’s financial infrastructure and a hub for the entire Central Asian region,” said Nazarbayev.

He also spoke in detail on the digitisation of economic sectors in the regions and on the national level.

“The fourth area is digitisation. We have launched the Digital Kazakhstan state programme. Digital technologies need to be introduced at enterprises in our basic industries, agribusiness, transport and other spheres,” he emphasised.

Nazarbayev also noted the need to develop human capital and the importance of transforming the education system.

Nazarbayev also instructed the government to consider all the recommendations of the working groups of the Foreign Investors’ Council and the proposals of the speakers at the event.

The President also introduced new council members: President of the ExxonMobil Production Company Neil Duffin, Chair of the Management Board of the Eurasian Development Bank Andrey Belyaninov, President of Philip Morris International for Eastern Europe Region Marco Mariotti, and Director of Marubeni Corporation Shigeru Yamazoe. The board also included the Chair of the Board of Kazakhstan’s Atamaken National Chamber of Entrepreneurs Ablai Myrzakhmetov. Nazarbayev noted there are other applications for membership, which will be considered.

Director of the European Bank for Reconstruction and Development for Kazakhstan Agris Preimanis also presented his recommendations on developing Kazakhstan’s economy and attracting investors.

He confirmed the need to develop human capital, noting the shortage of a high-quality workforce remains a key barriers to business development for foreign and local companies, according to a Kazinform report. He also stressed the need to develop a new environmental code and to exempt those who voluntarily paid penalties and taxes from criminal liability.

Chair of the Board of Directors of ERG S.a.r.l. Alexander Machkevitch proposed to accelerate the digitisation of Kazakhstan by creating a data management ecosystem, forbes.kz reports. He stressed the need to, first, create a national data storage centre in cooperation with all the players of the market – the state, businesses and the IT community. A national data analytics centre is also necessary, he said. It will raise the quality of data processing and formulate up-to-date tasks for the domestic market and solutions based on the real needs of both businesses and the state.