ASTANA – The Nur Kelbetti Festival unveiled an exhibition June 12 at Kazakhstan’s National Museum featuring paintings of Astana’s landscapes and sights from different angles. The exhibition will run through June 30. 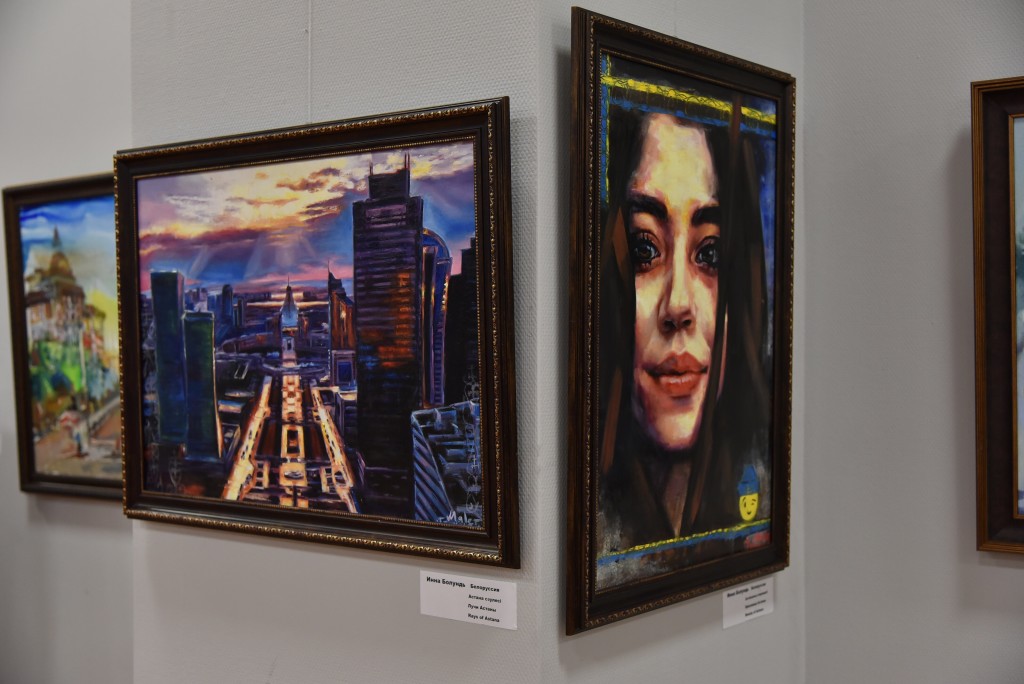 Twenty artists from around the world were tasked with painting their visions of Astana within four days after touring the city and its sights.

The 13 foreign artists were chosen from 250 applicants.

Festival organiser Sultan Srailov said the participation of foreign artists in the festival broadens the image of the city.

“They will take their sketches with them and will be working on them at home, presenting them at their personal exhibitions throughout the world. The artists could look at our city from a different perspective and depict local nature, architecture, cultural and historic sights in their paintings,” Srailov told a press conference.

The distinct feature of the exhibition is the diversity of how artists see Astana. 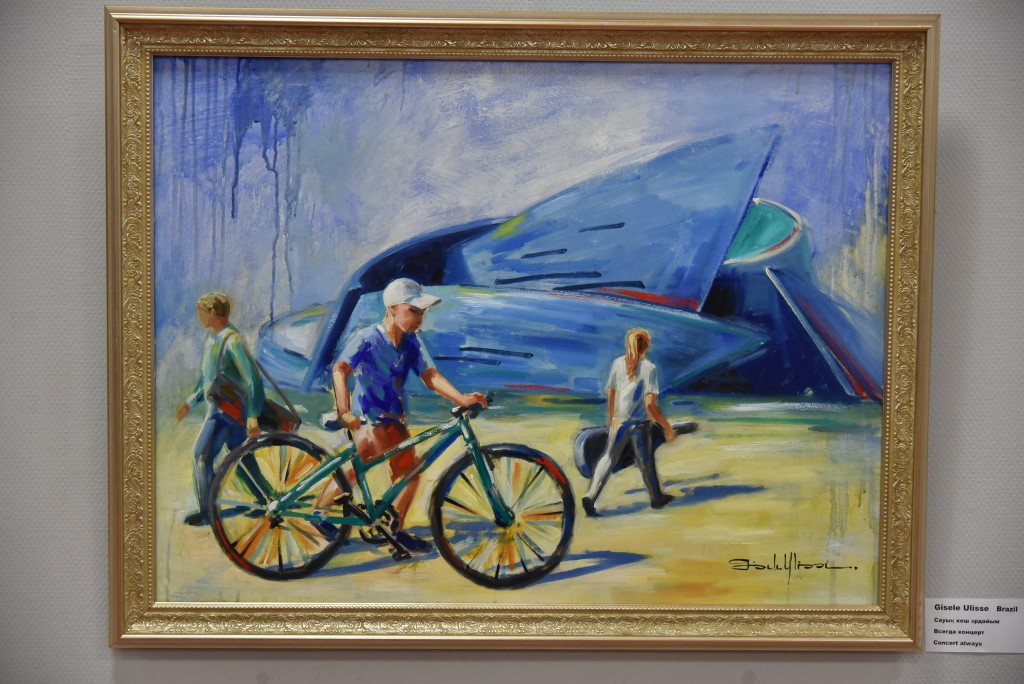 The goal of the festival, noted the organisers, is to use art to familiarise visitors with the Kazakh capital, its history and development, cultural sights and people.

There were no restrictions as to how many paintings could be created.

Dimitris Voyiazoglou from the Netherlands produced nine paintings during his stay in Astana and four of them are displayed at the exhibition.

“I am a street painter. I went outside to paint, except for one day, when there was bad weather. It was very nice to go outside on the street, paint and see people of Astana,” said Voyiazoglou told The Astana Times. Voyiazoglou was born in Greece but lives in the Netherlands.

“People were all very positive. They were all very interested in what I was doing. It was very nice to see how people react,” he added.

Several artists chosen had never been to Kazakhstan. One of them is Artem Mirolevich, an award-winning New York contemporary artist, curator and founder of the New York-based Russian Art Pavilion established to promote artists from Russia, Eastern Europe, the Caucasus and Baltic region in international exhibitions. 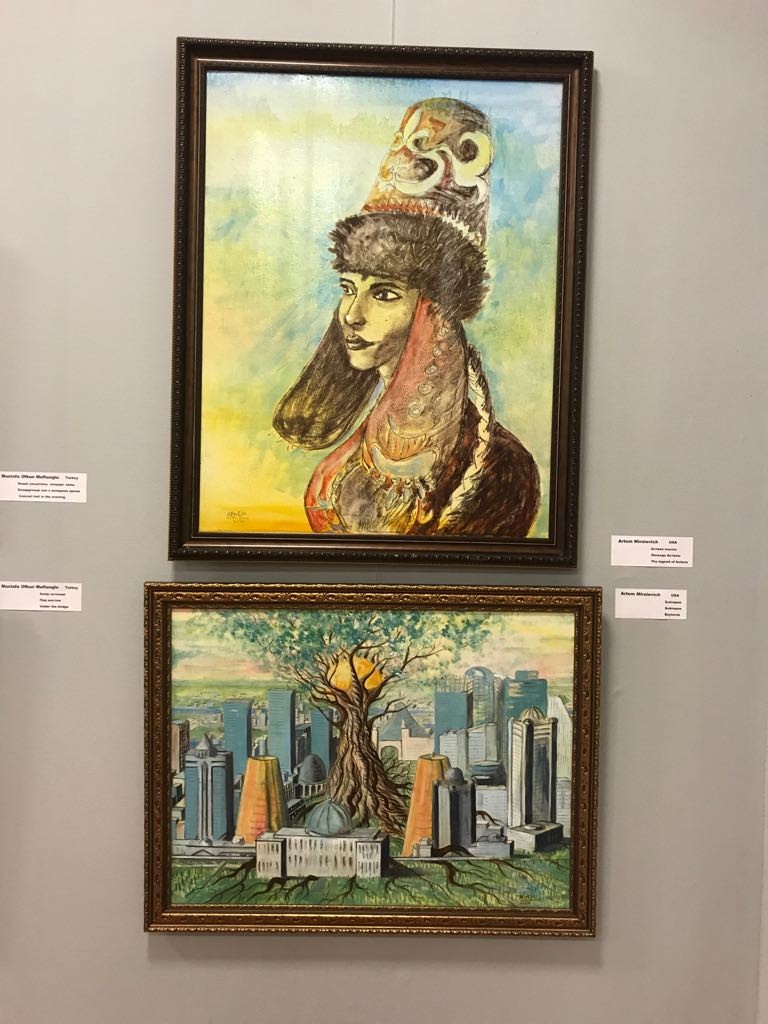 Born in Minsk, he moved to the United States at the age of 17.

“I travel often to take part in such events. Currently, I am a curator at the Barcelona art residence, where several years ago I invited a couple. Both were artists and the young woman was from Kazakhstan. She learnt about this event and sent me the information,” he said.

“During the first two days we were touring the city. Then we were provided with materials and work space at the Youth Centre or plein air (going outside to draw) depending on what the artist wished,” he said commending the level of the organisation.

Similar to Voyiazoglou, he was pleasantly surprised by the people in Kazakhstan.

“Even when we went out somewhere, everywhere people are very pleasant, friendly, modest, with a pride inside, but modesty outside. Sunny country and sunny people,” he said.

In his attempt to learn more about the country, he visited the National Museum first.

“I was born in the Soviet Union myself and I have heard about Kazakhstan but did not know its history and culture that deeply, as I have never been here before. Therefore, I asked my curators where there is a history museum,” noted Mirolevich.

What he liked about Astana is futuristic buildings of diverse forms and greenery rapidly growing across the city.

“When I travel, I love old buildings and cities or such architecture of the future (as in Astana). I love the city visually and I like the big space here. There is much greenery and parks. The city is comfortable for people and at the same time it is very compact,” he said.

In his two paintings for the exhibition, future, present and past resonate with each other in a “conceptually philosophical” style with “elements of surrealism.”

One painting depicts Astana’s famous 97-metre Baiterek Tower and another is a portrait of a young Kazakh lady embodying “the real nature of the nation, city and its soul.”

“I liked the legend about Baiterek and Samruk (ancient bird). What I painted is not very real but with evident elements of architecture and, in the middle, I drew the real Baiterek, enormous tree rising over the city with other buildings seeming to be very tiny,” he explained.

He tried to reflect the different angles of the legend and realities into his painting, said Mirolevich.

As part of their visit to Astana, the artists also conducted workshops for art teachers, students and schoolchildren.