ASTANA – The capital’s potential to become an innovative hub for finance, trade and transportation was discussed by Kazakh and foreign experts during the June 5 Astana: The City of Peace international conference, with particular emphasis on the Astana International Financial Centre (AIFC) and International Centre for Green Technologies and Investment Projects. 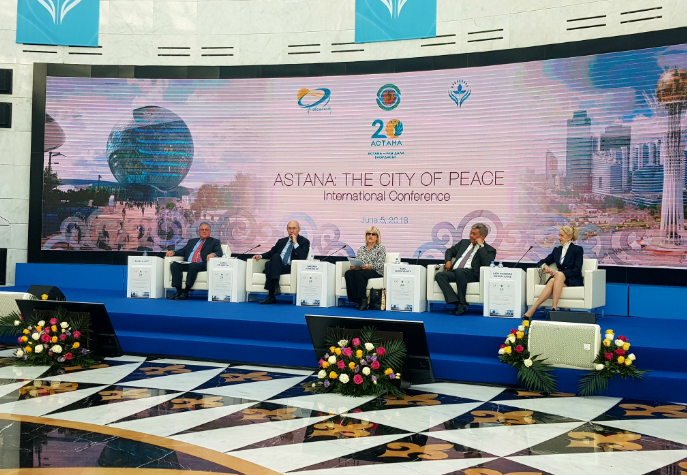 “The idea of President Nursultan Nazarbayev to establish AIFC as a regional financial hub was announced in 2015. Amendments to the constitution and special constitutional law were introduced, so that now Astana is the capital of Kazakhstan on the one side and a special legal and regulatory regime on the other side. English common law was introduced in order to bring foreign direct investment to global and regional financial centres, like the leading [centres] in New York City, London, Singapore and Hong Kong, which are also based on common law,” said AIFC Governor Kairat Kelimbetov.

“Out of five, three reforms are very much related to AIFC. For example, the first is the rule of law and within AIFC we have created the AIFC Court, Astana Financial Services Authority (AFSA) and International Arbitration Centre (IAC) to ensure transparency and predictability, which is important for investors,” he added.

AIFC formed its stock exchange in partnership with NASDAQ and Shanghai Stock Exchange. The latter is particularly important within the broader Belt and Road Initiative (BRI).

“When talking about a regional financial hub, we mean three key dimensions. One of them is Central Asia, which includes not only five former Soviet countries, but also the Caucasus and Mongolia. Another dimension is the Eurasian Economic Union and finally, the most promising dimension, the Belt and Road Initiative,” said Kelimbetov.

“In the next 20 years, Astana has to be in the camp of global smart cities supporting developments towards a green economy. I think in the next five-seven years Astana will be in the top 20 regional financial centres,” he added.

The importance of AIFC and the city’s potential were also emphasised by AFSA Board of Directors Chairperson Lady Barbara Judge.

“The establishment of a well governed financial centre is regarded as one of the key conditions to ensure the further economic growth of Kazakhstan and strengthen its economic presence in the Central Asian region. Our aim is to promote the growth and development of a broad range of financial services in Kazakhstan, particularly in Astana, by attracting global investment and providing services in accordance with world-class best practice. We, and personally I, believe that Astana, which is in the heart of Eurasia and on the Silk Road, has a huge potential to become a financial, trade and transportation hub in the very near future,” she said.

The International Centre for Green Technologies and Investment Projects will also play a major role in the capital’s development.

“Our main function is to create a green culture, address environmental issues through the development of green technologies in Kazakhstan and later replicate them in Central Asia. The centre also aims to contribute to transforming the energy sector, supporting the transition to green business and finance and applying green technology best practices,” said centre head Rapil Zhoshybayev.

The centre also studies the progress of leading capitals and has signed several agreements to attract technologies with a view towards developing the city.

The capital’s strategic role in politics and diplomacy, as well as finance, was evaluated by Chatham House Russia and Eurasia Programme associate fellow Kate Mallinson.

“Astana has seen a golden few years, emerging as a neutral platform for various conflicts including Russia, Turkey and Syria and maintains positive relations with key players including China, Russia, the European Union and the U.S. Astana as an innovative hub is a natural step and plays a key role in transforming this neutral platform into financial, trade and transportation benefits for Kazakhstan as a whole,” she said.

Mallinson believes economic and political power is shifting east in the 21st century and Kazakhstan stands to gain from the movement. China’s long-term foreign policy will incorporate the main principles of the BRI, with Kazakhstan being “the buckle” in this “belt,” she noted.

“Kazakhstan needs to embrace Chinese investment but also challenge the underlying assumption that large-scale investments in infrastructure, such as those at the heart of BRI, automatically promote economic development. The development of Astana as a financial, trade and innovation hub with initiatives such as the AIFC and the Astana International Stock Exchange will assist Kazakhstan in negotiating with China not from the position of a raw material base country, but as an equal partner,” she said.