ASTANA – Some 800 participants from 70 countries gathered at the 15th Eurasian Media Forum in Almaty on May 23-25 to discuss their work in the context of today’s rapidly changing political climate. 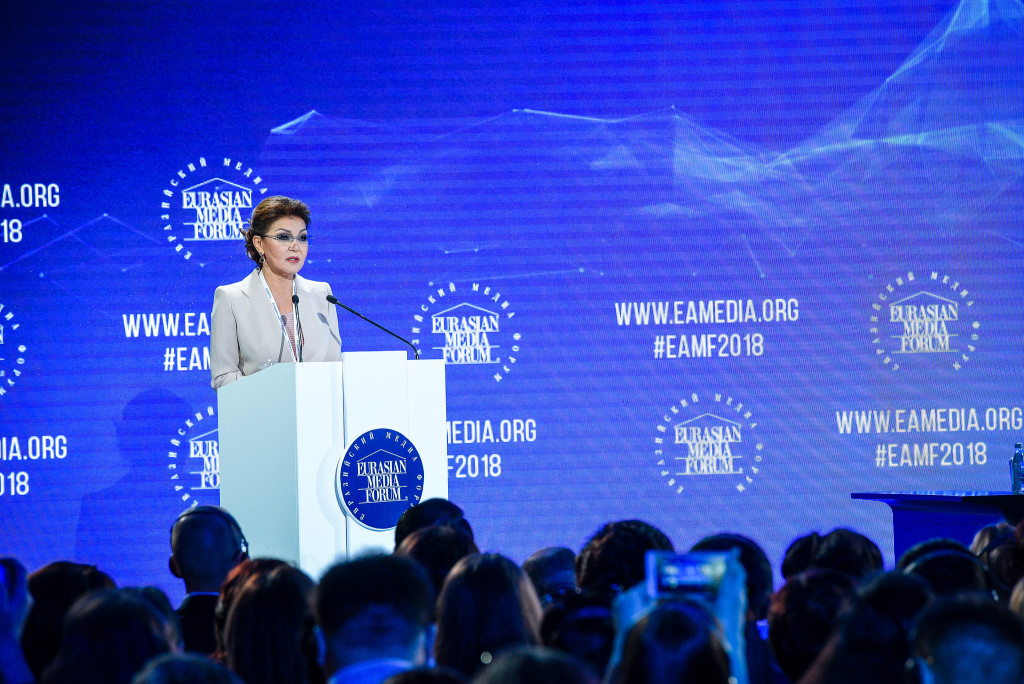 Political positions seem to be shifting with the weather with the return of cold war rhetoric between world leaders, economic and political sanctions, obstruction of diplomacy and restrictions on media – all issues tackled in panel sessions by prominent international politicians, economists, journalists and public and political figures, as well as representatives of political and expert associations.

Kazakh President Nursultan Nazarbayev emphasised the need for responsibility in reporting international affairs and the important role of the media in providing correct, reliable and objective information, as well as in identifying “fake news.”

“Against the changes taking place in the world, the escalation of geopolitical tensions and new technological capabilities, the media can become both a trigger for the escalation of conflicts and a factor for global containment and prevention of international tensions. Hence the high responsibility of journalism,” Nazarbayev said in a message delivered at the forum by Minister for Information and Communications Dauren Abayev. The field “should remain the embodiment of service to society, based on high ethical and moral qualities.”

“Only correct and reliable information and verification of fake news can attract an audience, strengthening the authority of the media as a source of objective information,” the Kazakh President added in his message.

The list of forum participants included well-known politicians and representatives of international organisations, research centres and mass media. The event focused on master classes for journalists and students, while local and foreign media experts discussed current topics in their industry.

“The responsibilities of journalists are even greater than they’ve always been. They are greater because there is more opportunity for getting news wrong either deliberately or by accident and then it’s disseminated around the world very fast – instantaneously – before it can be checked and possibly changed. That’s why there’s a huge responsibility on journalists of all ages but, particularly, the young ones,” said Reuters Society Chair Steven Somerville.

Kazakh Foreign Minister Kairat Abdrakhmanov said global citizens are witnessing turbulence and instability in the world order, including rising fear and rivalry as well as proxy wars and a general confidence crisis in international relations. “But it is not as gloomy as I have described,” he assured. “It is not as bad as the dark times of the Cold War, when Kazakhstan was the border between the Soviet Union and China. Now it is a border of friendship, trade and investment.”

He said that the world had also gotten rid of much poverty since then, mostly because of the successes of Brazil and China, and highlighted that Kazakhstan had done its best to contribute to world peace with the Astana Process on Syria, which resulted in an agreement between the Syrian government and some of the 65 opposition groups to allow withdrawal from the besieged enclave of Eastern Ghouta near Damascus (an agreement underwritten by Russia, Iran and Turkey).

Former Italian Prime Minister Matteo Renzi said that Kazakhstan had provided a bridge of dialogue in the last few years between Asia and Europe, saying that, indeed, Europe could only be an efficient and reliable partner because of the emergence of the European Union as a place of dialogue after centuries of war, and that that was surely a major achievements for history books.

Founder of the Eurasian Media Forum and chair of the forum’s organising committee Dariga Nazarbayeva noted the ways in which technological change had affected younger generations, especially through their access to new methods of communication, including social media, smartphones and free internet access, as well as their impact on the media.

“We, the journalists, are becoming hostages of circumstance, and more often mass media are turning from a source of necessary, truthful, neutral information into propaganda tools with a full set of sometimes dishonest instruments,” she said.