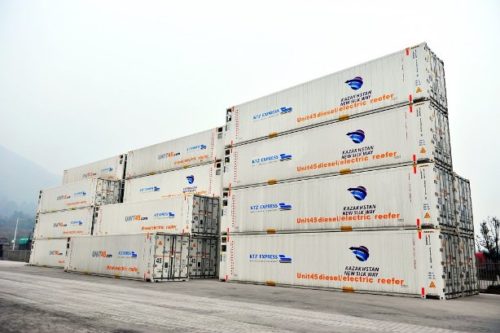 The agreement between KTZ and COSCO, a leading international container fleet operator, was signed during KTZ president Kanat Alpysbayev’s recent meetings in Shanghai with COSCO and other logistic companies of Chinese provinces.

“We are open for cooperation and ready to increase transportation volume through Kazakhstan,” noted Alpysbayev.

“As a result of the meetings, further opportunities for cooperation were discussed, as well as agreements to increase the volume of container shipment from China to Europe, Central Asia, Turkey and Persian Gulf states were reached,” said the company’s press release.

During the past 10 years, Kazakhstan has invested approximately $30 billion in transportation infrastructure.

“We have plans to invest an additional $8.4 billion by 2020. This will complement the already dynamic development of our trade routes in concert with China’s Belt and Road Initiative, in which our country plays a vital role. It will also breathe new life into transcontinental shipping routes between Asia, Europe and among Organisation for Security and Cooperation in Europe (OSCE) countries,” said Kazakh Deputy Foreign Minister Roman Vassilenko at a recent OSCE conference in Vienna.

According to the official, transporting goods by land has distinct advantages over other transport means. For instance, transportation by rail from China to Europe across Kazakhstan is three times faster than by sea and almost ten times cheaper than by air.

“Joint plans and projects worth more than $10 billion are currently being implemented. These are focused on developing infrastructure towards the Caspian Sea and the ports of Kazakhstan and Azerbaijan, as well as the Georgian and Turkish ports on the Black Sea. Once complete, they will contribute to delivering the speed and technological interlinkages that are required to meet the growing demand for goods and products,” he added.

In 2010, such transcontinental container shipments via Kazakhstan did not exist and in 2011 there were only 1,200 twenty-foot equivalent units (TEUs) transported. However, in 2017, Kazakh railways transported more than 200,000 containers to Europe and back in cooperation with 17 Chinese provinces, Vietnam, and South Korea.

“Rail transportation across Kazakhstan in all directions will reach 550,000 TEUs this year, and we expect these volumes to grow rapidly over the next few years reaching two million containers by 2020,” noted Vassilenko.