By Raushan Shamsharkhan in Culture on 5 May 2018 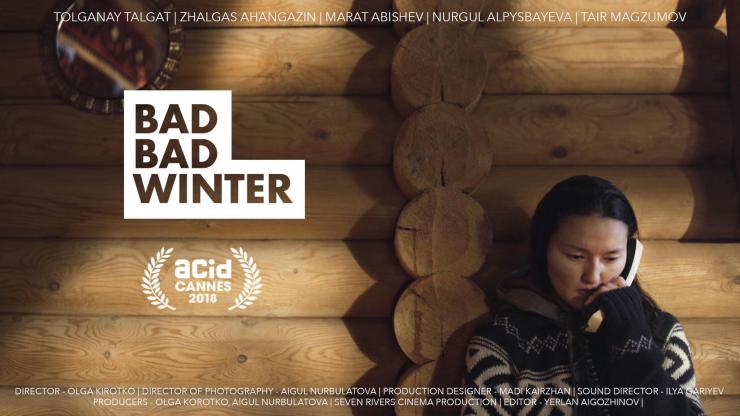 “We just sent a CD with our movie to the Cannes film festival. There is the common belief that you definitely need a producer who can recommend your film to get into Cannes, but we did not know anybody, so we just sent the disc,” Korotko explained.

ACID Cannes is a platform founded in 1993 by the Independent Cinematographers Association. As a rule of thumb, programme participants are non-released films without distributors. This year, nine films from Belgium, Kazakhstan, the U.S. and France will be featured, and three projects from Portugal will be presented in the ACID Trip section. “Bad Bad Winter” will be shown four times during the second week of the festival.

The film has five main characters and was shot in the neighbourhoods of Almaty. The crew was small: just the operator, linear producer Aigul Nurbulatova and artistic director Madi Kairzhan, who was trying cinematography for the first time.

“From the very beginning, we acknowledged that we had little to no budget. That is why we filmed in one location with only five actors,” Korotko told news agency manshuq.com.

“Bad Bad Winter” is a psychological thriller. The plot revolves around Dinara, an Astana businessman’s daughter. She comes to the city of her childhood to sell her grandmother’s house. Former classmates come to visit her, but their friendly meeting turns into something else: they tell her that they accidentally committed murder and now they need money. According to the film’s writers, the story resembles a confrontation between the rich and the poor over survival itself. Filming took place in early 2017.

“As soon as I received the letter, members of the selection committee immediately began calling me, congratulating me and saying that our film was their favourite at the selection and everyone liked it very much. Indeed, our emotions just went off the scale, and we could not fall asleep that night,” recalled Korotko.

Participation in ACID Cannes will give “Bad Bad Winter” a chance at finding a distributor and gives the filmmakers the opportunity to find producers for upcoming projects. The programme focuses on the promotion of films: after the film festival, organisers conduct a re-run. Nine selected works will be shown in various cities of France and meetings with the press and audiences will be arranged. Chosen films will be promoted throughout the year, which undoubtedly opens new opportunities.

“Publishers have already started contacting me. And, of course, we really want the film to be featured in Kazakhstan,” the director said.