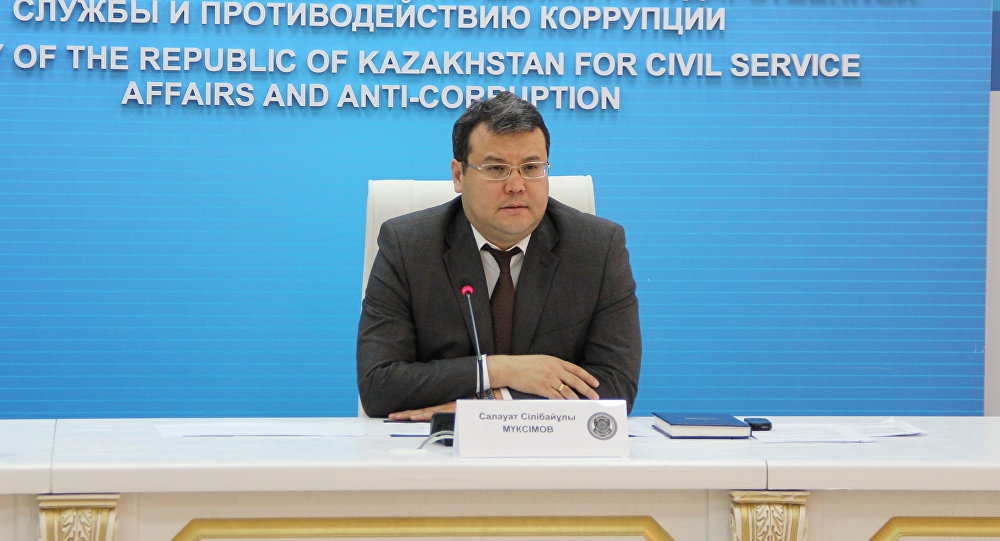 “In 2017, compared to the year 2015, citizens’ confidence in the state anti-corruption policy increased by 17.9 percent (from 55.5 percent to 73.4 percent). The number of registered corruption offences decreased by 18 percent during 2016 and 2017 as well. Sociologists noted a noticeable reduction in the corruption level, an increase in the trust level of this policy and eventually the proportion of people who are ready to contribute to counteracting corruption has increased,” he said.

According to recent Organisation for Economic Co-operation and Development (OECD) reports, Kazakhstan has made a significant leap in countering corruption. Transparency International’s Corruption Perceptions Index, released in February, indicated the nation has entered the zone of less corrupt countries, gaining 31 points.

“Our upsurge in the OECD reports is related to the adoption of the anti-corruption strategy. Previously various government programmes were undertaken to combat corruption, but the strategy adopted in 2014 changed the nature of attitude to corruption as a phenomenon. We moved to the middle category. I expect that next year we will witness good results in this regard. I believe quite tangible results will appear before 2020,” the official said.

The adopted law provided the department with additional capacities, such as conducting corruption risk analysis at state bodies by checking their management activities and analysing regulatory acts. For the first time, Kazakhstan is employing methods used in OECD countries by completing corruption risk analysis and eliminating causes and conditions.

In addition, an e-government forum was created for citizens’ convenience and to ensure transparency in state activities. Every citizen can now participate in adopting regulatory and legal acts with her/his proposals to the state and ministerial budgets being transparent, as each state body regularly posts its data. Muksimov noted the success of countering corruption is not only related to the measures indicated in the law, but also to their practical execution.

“We created many localities that were not previously available. These include entrepreneurs and non-governmental actors. Today, thanks to such a platform, everyone feels capable of contributing to changing the situation. Business received a clear signal that these administrative and corruption barriers can be eliminated and this understanding grows into confidence. This is a big sign,” he said.

The business sector previously did not engage in combatting anti-corruption and to date, the department has conducted two forums. Last year’s road map which outlines the implementation of the Cooperation Agreement between the Agency and the Atameken National Chamber of Entrepreneurs, examined 16 areas it felt caused questions, such as customs and taxation, and presented recommendations to state bodies.

Muksimov added the department intensified its work with foreign investors through a forum for foreign ambassadors, businesspeople and others dedicated to countering corruption and creating a favourable investment climate. The department also completed a second public initiatives congress with its reports and latest trends.

“Till this day, the non-governmental sector had never attended [the congress] to discuss corruption problems. Today, we are talking about this openly together,” he said.

The department designed a public control map that functions on social networks as well as created call centres in all regions and formed a unique monitoring group to implement anti-corruption measures on the regional level. In addition, instilling the rejection of corruption in the people’s mentality has been ensured through the efforts of the Assembly of the People of Kazakhstan’s (APK), ethno-cultural organisations, and religious figures.

Muksimov’s functions include minimising the level of corruption by preventing it, eliminating its contributing causes and conditions, shaping general corruption rejection in society and involving civil society so as not to confine oneself to state bodies efforts alone.

The agency is also tackling corruption on the national and international level.

“Regarding international anti-corruption measures, Kazakhstan follows the Istanbul Action Plan, alongside the Group of States against Corruption (GRECO) proposal, Commonwealth of Independent States (CIS) Interstate Council and the United Nations conventions,” he said.

National actions refer to those systemic measures prescribed by law, including an analysis of corruption risks, forming an anti-corruption culture and anti-corruption monitoring. The most pressing task is minimizing the internal corruption that citizens encounter in their everyday interactions with state and regional bodies.

In this regard, the department has launched three projects. A special office was formed to implement the Astana Adaldyk Alany (Astana’s Integrity Platform) project, launched in conjunction with the city akimat (city administration).

“Astana, and its local executive body, in particular, implements this programme and meets with residents, and contacts with the states and citizens indeed take place. It is convenient for us to see its relationship with the central apparatus and state bodies. Within the programme framework and using the pilot programme, the same mechanisms will be scaled up and implemented in all other regions in Kazakhstan,” said Muksimov.

Sanaly Urpak (Conscious Generation), established in Almaty, seeks to minimise corruption in the education system. The project has developed an optimal solution for curbing corruption at the secondary and higher education level, as well as disseminating the academic honesty principle. University academic integrity and cohesion ratings will be issued annually based on project estimates.

“Almaty, as the largest educational centre with approximately 38 universities, the largest number of schools, colleges and a third of youth of the country, was chosen conscientiously. Statisticians and sociologists claim that this is the most vulnerable sphere. This is understandable; among all other spheres, education is the most large-scale area, as approximately 4.5 million people are involved, ” he said. The third project involves promoting investors’ and the business sector’s rights and interests.

“This project office is just being created; we are working on it. It will be located in Astana, on the basis of the Investor Service Centre at the Ministry for Investment and Development. We announced this project at the investment forum and since then, work is underway to establish this centre. In general, the agency is aimed at creating three new basic design offices related to Astana Adaldyk Alany, Sanaly Urpak and Investor Service Centre projects, which should give results by the end of the year,” he said.

Although much work has already been done, citizens’ passivity in the process is evident. Information awareness and the public council’s website infrastructure must be strengthened to become user-friendly. Public councils are indicators of a healthy democracy, yet the councils created in 2015 have been indifferent. Despite forming 229 councils at government institutions at the central and local levels involving 4,055 individuals, their significant potential is underused.

“We should work hard to increase the role of public councils in the regions. Any public control minimises corruption,” he said.

Muksimov noted the effect of such steps is the country’s positive international rating, followed by a significant economic element. Foreign investors will be attracted to a nation with reliable state institutions and structures, while the actions also lead to strengthening national security.

“Previously, we referred to this policy as fighting against corruption; even the policy name “Fighting against corruption” embodies the character and the change in the course in this direction. Nowadays, corruption is considered as a disease, a social phenomenon. It should be treated methodically, clearly and gradually and we ought to deal with the prerequisites of corruption, not fighting its consequences,” he said.