By Raushan Shamsharkhan in Nation on 29 May 2018

ASTANA – KADEX 2018, the fifth international weapons systems and military equipment exhibition, was held May 23-26 at the military sector of Astana International Airport. 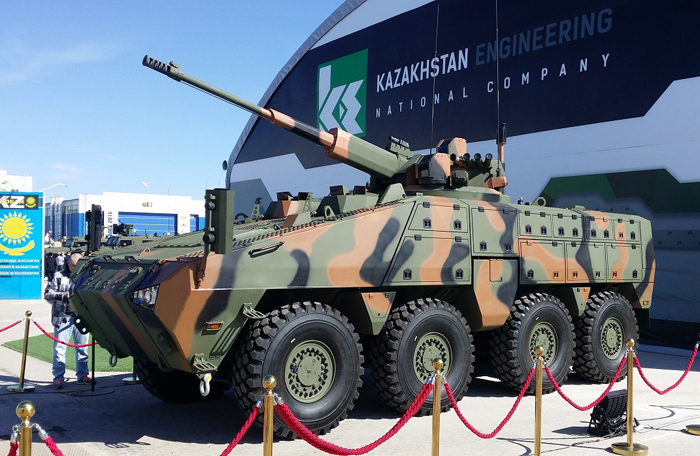 “Our country, as you know, is pursuing a peace-loving policy aimed at strengthening good-neighbourliness with all its neighbours and distant neighbours, but today’s world situation forces everyone to strengthen their defences, and we are doing the same within the Collective Security Treaty Organisation (CSTO). At the same time, the defence sector and armed forces development are one of the state priorities and an effective instrument of their implementation is an international exhibition, the only one of its kind in Central Asia,” said Kazakh President Nursultan Nazarbayev at the May 23 opening ceremony.

The head of state stressed KADEX 2018 has become an event of global importance in armament and information security. He noted the large-scale exhibit is one of the most effective sites for strengthening defence potential and developing military-industrial cooperation between countries.

“The exhibition demonstrates advanced products, the best achievements of Kazakh and foreign enterprises. The latest developments of leading design bureaus in the field of information security are presented here,” he added.

KADEX, held biennially since 2010, has evolved into a useful platform to create mutually beneficial contacts between defence industry manufacturers and consumers, as well as an opportunity to exchange experience in technological armed forces development. This year, the exhibition was organised for the first time by the Kazakh Ministry of Defence and Aerospace Industry and the conference session was opened by Deputy Prime Minister Askar Zhumagaliyev and Defence and Aerospace Industry Minister Beibut Atamkulov.

Companies presented 124 land equipment items and 18 types of aircraft and drones. The ten pavilions included national displays by China, Russia and Turkey and exhibits by Kazakhstan Engineering, Kazakhstan Paramount Engineering and Kaztechnology. Means of monitoring, tracking and protecting information took the leading place in the pavilions.

For the first time, one pavilion was dedicated solely to space technology and organisers prepared a separate pavilion devoted to domestic and international cosmonaut achievements. Another innovation was the Days of Space in Kazakhstan international forum.

The Ministry of Defence and Aerospace Industry signed memoranda of understanding and cooperation with King Abdullah’s Office (Jordan) and leading Belgian, Russian and Turkish companies. Memoranda on collaboration were also inked between Kazakh companies, Belarusian and Kazakh scientific institutes and TransTelecom (Kazakhstan) and CyberX (Israel), noted the Ministry of Foreign Affairs press office.

“Modernisation will increase the localisation of production from 30 percent to 70 percent and increases the country’s defence capacity through its own production and expands the export of military equipment,” said Kazakh Defence and Aerospace Industry Vice Minister Asset Kurmangaliyev.

The first two days of KADEX 2018 were open only to specialists, with visitors welcomed on the remaining two days. Guests became acquainted with the latest military-industrial and aerospace achievements and advanced developments, such as Kazakh helicopters and planes, helicopters modernised by Ukrainian companies, a Turkish Air Force Airbus A400 and Kazakh Army CASA C-295 aircraft and Su-30 fighter. Visitors could not only see and touch the exhibits, but also had a chance to sit at the controls of Arlan and Barys armoured cars and certain aircraft.

“Those wishing to see the submachine guns, tanks and planes gathered at the exhibition in the morning. None of the visitors remained disappointed. They were happy to share their emotions on social media after the spectacular performance,” said Astana Military Unit No. 68665 serviceperson Daniyar Aitkozhin.

A memorial issue of the Kazcosmos 25th anniversary stamp was presented on opening day at a ceremony attended by the heads of the Ministries of Defence and Aerospace Industry and Information and Communication, KazPost and guests of honour. Commemorative stamps and first-day covers were available for purchase.

KADEX 2018 resulted in contracts, agreements and memoranda which have the potential to promote partnerships in military-technical cooperation, cybersecurity and outer space exploration. Kazakh and leading foreign companies signed a significant package of documents, which Nazarbayev noted would contribute to developing international defence industry cooperation and domestic and foreign partnerships. Kazakhstan Engineering agreed to develop military-technical cooperation with Thales, a French company, and signed a memorandum with Turkish company Otokar to produce vehicles, including armoured cars, according to the Ministry of Defence and Aerospace Industry.